Brought to you by Comrade Hank Paulson, Founder of the New Nation, Wall Street

This Week in Wall Street Socialism...

While Nancy Pelosi and Barney Frank hold Press Conferences claiming the Republicans won't modify the bad bankruptcy bill to enable renegotiation of bad primary residence mortgages.... and Barney Frank claims the Paulson plan is the only plan that can pass in some modified form....

Other economists are writing up their own alternative plans and posting them online.

A few are reposted here.

This week we have seen more rhetoric in video that I can ever remember.

It's Friday and now we're all going to watch debates supposedly on foreign policy. The posturing, political football season is upon us.    Democrats are now claiming:

Without Republican cooperation, we cannot pass this bill 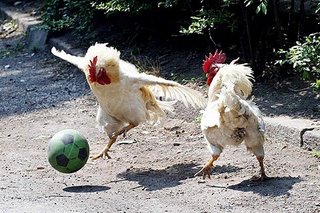 I guess this latest sound byte is working on the assumption that Americans cannot add up the number of Democrats in the House and Senate.

Like a bad High School fumbling, the Political Football is bouncing around the field. Few are bothering to analyze what will work and what will not. Real solutions seem to be off the table.

Senator Shelby (R-AL), has come out and said this entire bail out deal is fatally flawed. He claims to have over 300 Economists agreeing with him.

Richard Shelby is the ranking GOP member of the banking committee and what is more interesting is he used to be a Democrat and switched parties in 1994.

We ought to look at alternatives

I'll be honest, I never wanted to write up a diary piece like this. A week ago, like many of you, my feelings on "bailing out" Wall Street was equally negative. Why? Why in the name of all that is decent should we clear up the bad judgment of folks who really do not care about the common folk?

For years, folks who would be identified as the type who would get the jobs of running organizations like Goldman Sachs or Lehman Brothers, were considered "Masters of the Universe." For them, we, you and I, were the dirty lowers against their kind. We existed to supplement their income. But now the veil has been lifted, and we see now that they are not masters of anything but their own greed and stupidity.

That seems to be the motto of Hank Paulson's bail out demands.

Today the Budget office had a Federal Responses to Market Turmoil Committee hearing.  Peter Orszag, Director of the Congressional Budget Office, in my opinion, confirmed what the critics are saying, this is not a wise plan. But read more and you decide.

What we know so far?

So deadly I wonder if few dare to even ask it?

Can these massive bail outs cause the United States to default on it's own debt?

There. I said it.

Honestly I don't know the answer but it is something I sure want answered. Otherwise it's like we have the bad uncle here, the gambling addict who we bail out and bail out yet he keeps ending up in Las Vegas only to be killed by a gang of loan sharks after we're out our life savings.

Is that scenario possible?

Economists are now tallying up the numbers and estimating the effect of the latest bail out on the federal deficit and it ain't pretty.

Today there was a Senate hearing on the bail out. Here is the video:

We are now hearing the United States has a dire emergency and if Congress doesn't act immediately we will face some sort of Economic Armageddon the world has never seen before, which of course they cannot describe.

The Most serious crisis the World Has Ever Dealt With

(Wasn't that the Black Plague or maybe WWII?)

Here is Senator Chris Dodd saying Hank Paulson should be given the authority, absolute: