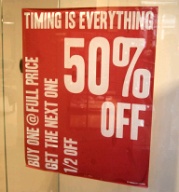 It isn’t even important whether you or your family have a Merry or a Happy Christmas – the only important thing is whether corporations have a profitable Christmas. This is the true meaning of Christmas.

The mighty American marketing machine known as Christmas put on a brave front this weekend. Stores across the country opened up earlier than ever – some as early as 2:00 a.m. on Friday morning – and shoppers responded. Some consumers gave up their Thanksgiving Thursday altogether by using that day to stake their position on a sidewalk outside Best Buy, Wal-Mart, Target, or Sears. The rewards were high – those who were first in the store on Black Friday had the best shot at buying at deep, deep discounts. Flat screen HDTVs, which were otherwise priced at $1,000 minimum, were on sale for $300, but only on Black Friday and only to the earliest few into the store. (Image)

The Census Bureau reported this morning that:

This drop was not anticipated by most observers.

As with March, it appears that almost all of the decline in consumer sales vs. a year ago is cars and gas. (Update: Ex-gas and cars, YoY retail sales are flat to -0.1%).

Last month's decline failed to take into account the early Easter from last year vs. this year. Thus we should probably average the two months' data, for a decline of -.9% YoY.

I am an economic populist. What does that mean? According to Wiki that means

a member of a United States political party formed in 1891 primarily to represent agrarian interests and to advocate the free coinage of silver and government control of monopolies.

a believer in the rights, wisdom, or virtues of the common people

The year 1891 was a long time ago are there really any Populist party members still around? Most likely no, and any politician who espouses populist rhetoric is instantly shouted down in the media by the opposition and even their own political party.

So who is the economic populist today?

For anyone whose read my pieces in the past, knows that I hold a certain disdain towards former Reagan White House OMB Associate Director/conservative-libertarian Ayn Rand acolyte Larry Kudlow. It's nothing personal against the guy, it's his ideas and economic policy objectives that I find fault with. For the past couple of months, he's been going on about this is the "Goldilocks economy." Essentially, that we're worrying about nothing because one bad economic indicator is being offset by a good one (mind you, he's often just used productivity as that one). Well today, despite his claims that all is almost well, we got some news that just proves Larry Kudlow wrong!

Ok, I will give him some credit. He isn't a Pollyanna and he has come out and said this or that has been bad or needs to get better. Still, his overall anthem is that things are really great and that we (he's quoted Phil Graham) should stop "whining."

Inflation is still there and going higher.