The July 2011 monthly unemployment figures show the official unemployment rate decreased to 9.1% and the total jobs gained were 117,000. Total private jobs came in at 154,000 with government jobs dropping -37,000. 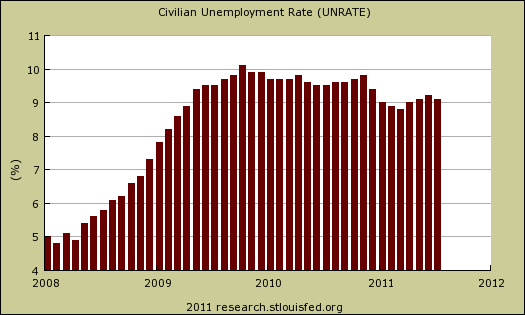 This month's unemployment report is dismal, so maybe, just maybe we should demand policy makers start offering real solutions to the jobs crisis.

Earlier we reviewed the April 2011 BLS unemployment report. This post goes into a more unemployment and jobs details not covered previously.

There are 13,747,000 people officially unemployed, and if one takes the alternative measure of unemployment, it's 24.4 million.

In a surprise twist in a long-running saga, the Air Force on Thursday awarded a $35 billion contract for aerial fueling tankers to Boeing rather than to a European company that builds Airbus planes.

This was a huge deal in 2008, when the Pentagon choose EADS, for Airbus is not an American company, and most of the work, and thus jobs would be offshore. That's your taxpayer dollars going offshore, not hiring American workers, not circulating back through the U.S. economy.

Pentagon officials said decision was based solely on price. Boeing’s bid was more than 1 percent below that of its rival, the European Aeronautic Defense and Space Company, the officials said. If the bids had been within one percent, the Air Force would have weighed 92 additional requirements for the plane as a tiebreaker, and some of those were widely thought to favor the larger EADS plane.

This contract eventually will be worth $100 billion dollars and a huge number of good paying jobs, 50,000 directly and over 100,000, eventually, will be in the state of Washington.

The ADP report for December 2010 it out and ADP is reporting a gain of 297,000 private sector jobs. This is the biggest service sector job gain, 270,000, in the history of the ADP report. The United States needs a good 175,000 jobs per month just to keep up with population growth and this is the first time we've seen any job growth like this for over 4 years, as reported by ADP.

If this isn't a definition of a Depression, I just don't know what is. Carmen Reinhart, University of Maryland Economist, is projecting a decade of high unemployment:

Ms. Reinhart’s paper drew upon research she conducted with the Harvard economist Kenneth S. Rogoff for their book “This Time Is Different: Eight Centuries of Financial Folly,” published last year by Princeton University Press. Her husband, Vincent R. Reinhart, a former director of monetary affairs at the Fed, was the co-author of the paper.

The Reinharts examined 15 severe financial crises since World War II as well as the worldwide economic contractions that followed the 1929 stock market crash, the 1973 oil shock and the 2007 implosion of the subprime mortgage market.

In the decade following the crises, growth rates were significantly lower and unemployment rates were significantly higher. Housing prices took years to recover, and it took about seven years on average for households and companies to reduce their debts and restore their balance sheets. In general, the crises were preceded by decade-long expansions of credit and borrowing, and were followed by lengthy periods of retrenchment that lasted nearly as long.

“Large destabilizing events, such as those analyzed here, evidently produce changes in the performance of key macroeconomic indicators over the longer term, well after the upheaval of the crisis is over,” Ms. Reinhart wrote.