As expected, the China March trade deficit is being used as political cannon fodder to claim China does not manipulate it's currency. (Uh, yes they do).

The $7.24 billion trade deficit in March reported Saturday by China's customs administration was China's first since a $2.26 billion deficit in April 2004.

So of course China is using this data to claim the trade imbalances are not a result of currency manipulation and to claim any re-evaluation of the Yuan would hurt the global economy (read China's export driven mercantilism).

Here is the propaganda:

The Commerce Ministry said that the deficit shows that "the decisive factor that affects the trade balance is not the exchange rate, it's the relationship between market supply and demand and other factors."

What they are not telling you is the Chinese Lunar New Year was for 15 days and China shut down the factories. This is for the last half of February. But the workers did not come back to the factories. So obviously output from China would be temporarily reduced for a month with all manufacturing stopped for a 15 day holiday and then the workers did not even return to their jobs.

To wit, can one even trust China's statistics?

Below is a graph, created by Georgetown Economic Services, while dated (2005), shows clear discrepancies between what China tells us it's exports and imports are vs. what individual countries data says their China trade deficits are. 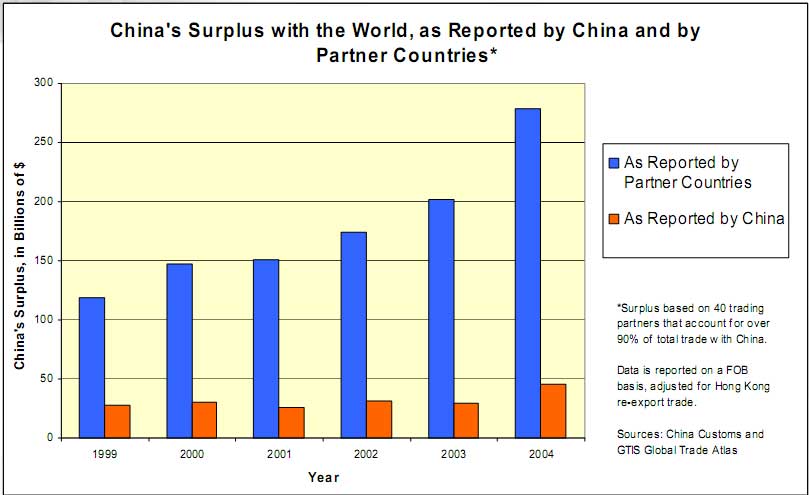 There have been investigations into different accounting methodologies on trade data. In 2006, China reported a $203.5 billion trade surplus with the United States, while the U.S. reported a $287.8 billion Chinese trade deficit. One must note, that only 90% of the accounting differences have been resolved, according to the report.

So, as we can see, $7.84 billion is only 6.46% of the total exports, well within the margin of error, even assuming the Pro China data discrepancy report findings are accurate.

I will try to crank and find some numbers to update the point of this post. In the meantime, watch out for the reported and claimed trade deficit to be used a a political weapon to avoid any action against China for currency manipulation.