Consumer Confidence dropped 4.7 points in September to 48.5. This is the lowest reading since February 2010. The below consumer confidence chart graphs out the increasing American dissatisfaction with the economy. 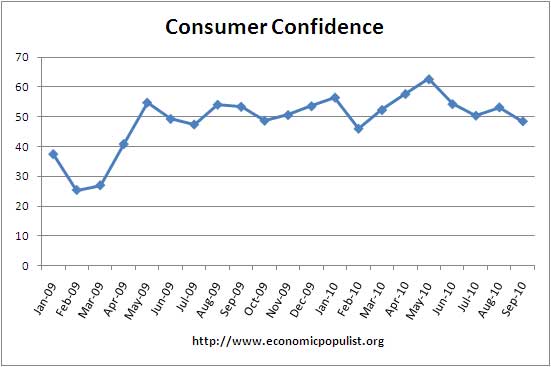 The Conference Board Consumer Confidence Index®, which had improved in August, retreated in September. The Index now stands at 48.5 (1985=100), down from 53.2 in August. The Present Situation Index decreased to 23.1 from 24.9. The Expectations Index declined to 65.4 from 72.0 last month.

Current conditions weakened by for anyone in reality these days it is the job market which is causing the pessimism.

So, while people cannot identify Oklahoma on a map, they at least know there are no jobs out there.

Consumers are also more pessimistic about future employment prospects. Those expecting more jobs in the months ahead remained essentially unchanged at 14.5 percent in September, compared to 14.7 percent in August. However, those anticipating fewer jobs increased to 22.7 percent from 19.6 percent. The proportion of consumers expecting an increase in their incomes declined slightly to 10.2 percent from 10.6 percent.

American Workers Put Last in Obama's Amnesty - 21839 reads
California is officially flat broke - 96357 reads
The de-industrialization of the U.S. - 56995 reads
The Cost of Left-Wing hate - 118548 reads
Safeway Skewered for Throwing 6,000 Workers Under the Bus in Video Parody - 334705 reads
What Hillary Clinton REALLY said about TPP and Fast Track - 19454 reads
28 Democrats just voted to Offshore more Jobs - 14455 reads
Will the NY Attorney General Bring Doomsday Charges Against Wall Street? If So, How Long Will He Survive? - 1152338 reads
Even More Ado About Oil - 27382 reads
Neither Employed, Nor Unemployed - 19544 reads