The Congressional Oversight Panel has released their latest TARP report, Taking Stock: What Has the Troubled Asset Relief Program Achieved?

The Panel concluded that TARP was an important part of a broader government strategy that stabilized the U.S. financial system. It is apparent after 14 months, however, that significant underlying weaknesses in the financial system remain.

Some facts outlined in the overview:

I'll sum this up in our classic Populist terms. Way to go! You bailed out Wall Street and screwed over main street!

Here is the actual report (large pdf). The report outlines the history of TARP and has a series of timeline facts, one of which was shocking:

I note on page 26, AIG still has $165.1 billion in total government funding support and Citigroup has a whopping $280.4 billion!

I'm ignoring the $45 billion for BoA since it was announced they intend on paying the TARP funds back. Citigroup has just announced it plans to pay back about $20 billion through a stock sale.

On warrants, to date COP notes the U.S. taxpayer, if warrants had been sold at market value, would have received $198 billion more than it has. (p. 30). COP estimates outstanding warrants value to be around $6.35 trillion.

It seems this COP report is trying to allude to the overall state of dismal affairs for the U.S. middle class and I want to pull out the below graph on overall U.S. delinquencies, which shows a horrific trend line: 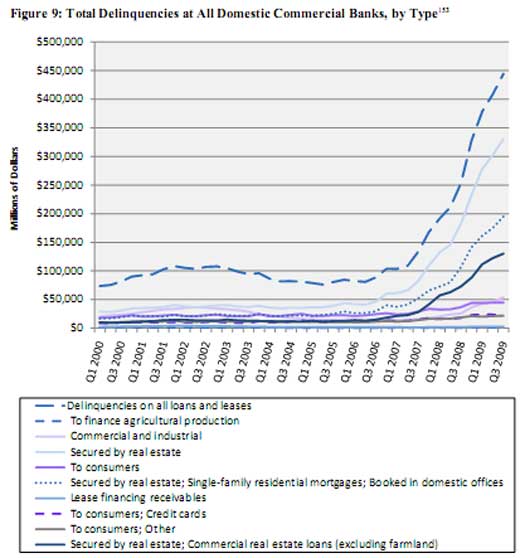 and this one on charge offs (loans deemed not collectable): 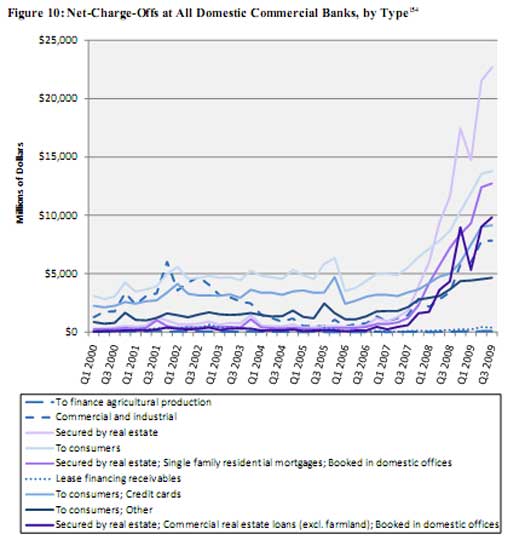 While the report suggests this is why financial institutions are reluctant to lend, I blame the banks for making loan terms impossible (credit cards being the worst). The graphs also show the truer state of affairs for most of America. We're broke, now cannot pay our bills and there are no jobs.

There is much more in the report, including details on bank failures and other programs.

Representative Jeb Hensarling wrote a dissenting analysis at the end of the report (p. 121) which is really worth a read.

Hensarling states TARP failed on pretty much all fronts but this is of interest:

It seems quite unlikely that the TARP – unassisted by the Federal Reserve and the FDIC – would have stabilized the U.S. financial system.

I think that the Congressional Oversight Panel has released their latest TARP report, and it is very important because it has created an implicit guarantee for major financial institutions that distorts pricing for capital and encourages excessive risk-taking.