It's astounding this above full press conference has only 5 views at the time of this posting. Folks, if you want the Fed to speak, it's a real good idea to listen to what they say, in spite of Bernanke's geeky nervousness.

On the infamous S&P U.S. credit downgrade threat, Bernanke seems to agree with their political maneuver since the deficit is not sustainable.

One of the more odious claims Bernanke made is gas prices will not continue to rise at the current pace and will come down.

The Fed released their FOMC statement, and when it comes to oil, here are their reasons or lack thereof:

Commodity prices have risen significantly since last summer, and concerns about global supplies of crude oil have contributed to a further increase in oil prices since the Committee met in March.

So, why the Fed believes oil prices will drop is unknown. A global economic slowdown will reduce demand. Maybe the Fed knows of a supply increase or possible speculation will ebb. To wit, a great post on oil prices' correlation to currency exchange rates from 2007 shows there isn't as much correlation as one would think in exchange rates vs. oil prices. I'll borrow one of the graphs but it's a great analysis piece to understand that relationship. 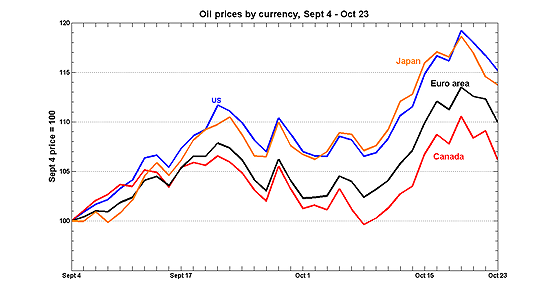 And just to make sure everything is confusing, even if nominal dollar and oil price movements due to monetary shocks are the reason for the correlation, the resulting dollar movements -- in the presence of sticky prices -- can result in real exchange rate movements (see Frankel (2006) that re-allocate wealth and spending power between countries, and hence feed back to oil prices.

One thing I appreciate from the Fed is how they do not deny the jobs crisis and how critical it is to real economic growth and recovery. Unfortunately it is Congress and this administration, not the Federal Reserve who could change trade policy, tax policy, curtail offshore outsourcing and other factors that are key critical to create jobs.

For all of you wanting to know why the Federal Reserve lending money to a Libyan Bank, you are sorely disappointed. The press gave softballs to the Fed.

Dylan Ratigan has been "back on it" lately in terms of economic/financial insanity and he has an interview with Yves Smith, Naked Capitalism as well as Josh Rosner here and it's a great interview on the history of financialization and derivatives.

Slow internet connection is my excuse.

I wonder why he decided to have his first news conference at this time? It can't have anything to do with the president's reelection announcement and falling popularity, even among Democrats.

He's been saying for close to six months now (I think) that it will be 4-5 years before we return to full employment. Silly me, I figured he was leading the way and after the election, I hoped Obama would also start some straight talk about our employment mess.

Has Ben ever said "99er" in public, I wonder. I'm pretty sure Obama has not.

Very interesting about gas prices -- both his prediction and how on earth he could know. Time will tell, won't it?

Re Recent Awful Tornadoes and Floods:

Looks like we'll be paying for rebuilding and other projects that the Republicans wouldn't approve.

Oh no wait, that's Republican country down there. So the spending will be an emergency and OK. Unlike, say, 99ers who have run out of unemployment and money, which is obviously not an emergency and nothing to worry about.

Good thing we're supposed to have an above average hurricane season. That will put some people to work too.

Does it seem we are having some mega disaster once a month these days? I don't know if anyone caught the NatGeo show where they put together home videos from those in Japan but the images are pure horror and it seems every month we're getting these major horrors and events.

"Folks, if you want the Fed to speak, it's a real good idea to listen to what they say, in spite of Bernanke's geeky nervousness".
Why would anyone believe what he says has anything to do with reality?
Like the previous article, why would anyone believe what the FED has to say?
There is more political therefore economic significance in the Obama birth certificate release than the FED news conference.

Right now on the blog list is quite the slam on the Fed's discount window and we've been here the entire time, outraged over the protection of derivatives to making a consumer financial protection agency under the Fed, you name it.

That said, the Fed is loaded with economists and sometimes it's just plain economics they are talking about and believe this or not, sometimes these economists actually get it right.

We don't do birth certificate here, we're much too busy showing the multinational corporate/financial sector control of the U.S. political system.

My comment (below) titled "Continued and increasing political pressure on the Fed" was intended to be in response to Robert Oak's comment "why would you believe Ben?"

To the extent that birth certificates and such ostensively meaningless issues affect presidential elections, they are de facto a significant independent economic variable in that the president significantly affects the economy.

On second thought, maybe this blog should do birth certificates.

The reason for this post was before the press conference there was a flurry of articles thinking for some reason....the press would do it's job.

I knew that wouldn't be true and of course it was not. It's about as scripted as an Obama press conference in a lot of ways.

On data, I look at economic data often and their statistics for the most part show a slowing economy, so they are not pushing any fiction.

The industrial production revisions are bothersome but I point out capacity everytime in a graph.

Robert Oak: You or others here at EconPop have criticized the "Down with the Fed" mime, saying that after all the Fed has many good people and competent economic analysts on the payroll. I agree, but I support continued and increasing political pressure on the Fed and especially on Bernanke.

Here's an example of a good economic critic coming out of experiences at the big institutions: Simon Johnson, former chief economist of the International Monetary Fund, currently professor at MIT Sloan School of Management. Here's from his recent (April 26) article at Project Syndicate (you've probably read the article) --

There are many advantages to having an independent central bank run by professionals who can keep their distance from politicians. But when the people at the apex of these institutions insist that the crisis response went well, and that everything will be fine, even as the financial behemoths that caused the crisis lumber forward, their credibility inevitably suffers.

That should worry central bankers, because their credibility is pretty much all they have. The US Constitution, after all, does not guarantee the Fed’s independence. Congress created the Fed, which means that Congress can un-create it. By assuming away the damage that highly leveraged megabanks can do, the myth of a “good crisis” merely makes political pressure on central banks all the more likely.

Yes, I would like people to be more informed about what's happening, and I recommend Econ Pop for that reason, but I think that there is a necessary and well-deserved disrespect for the Fed these days (as the Fed is represented by its ever-glorified Tsar or Chair), whether the populist reaction is well-informed and educated, or not.

My opinion is that there will be severe rate increases in 2012. Will that be timed to an election? You tell me.

That ugly behind of the Emperor without clothes must be ridiculed or we lose any claim to being a free people!

On the bail outs and a host of other issues, I'm right with people bashing the Fed, and sticking the consumer financial protection agency under them rendered it guaranteed to not be as such.

That said, they do have a lot of real economists within and they rally are on target in a lot of their research/analysis...

I read them all of the time.

Then, on the entire "abolish the Fed" meme, I just look at our even more corrupt and absolutely crazy, pure economic insanity Congress and this administration doing whatever corporations want them to, and I think, hmmmmm, maybe that's not such a great idea after all.

If we had a real Congress and representation I'd be more amendable.

But EP can handle different views and when it comes to facts, keep 'em coming.