The World Bank has cut their global growth projections from 3.4% to 3.0% for 2015.  In 2016 they predict global GDP of 3.3% and in 2017 the world bank believes the globe will have a 3.2% annual GDP.  In seems plummeting oil prices are great for nations which import and horrific, of course for countries that export.  The World Bank's below graph shows what is projected to happen to Russia for 2015 and it ain't pretty with a -2.9% 2015 GDP projection.  That's quite a dependency on the price of oil. 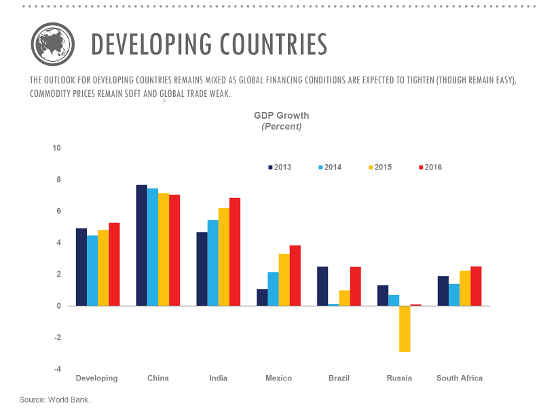 Several major forces are driving the global outlook: soft commodity prices; persistently low interest rates but increasingly divergent monetary policies across major economies; and weak world trade. In particular, the sharp decline in oil prices since mid-2014 will support global activity and help offset some of the headwinds to growth in oil-importing developing economies. However, it will dampen growth prospects for oil-exporting countries, with significant regional repercussions.

The United States GDP was actually increased in projections to 3.2%, with the U.K. also faring better.  The Eurozone and Japan are expected to be drags on the global economy and deflation is much more of a risk as well.  Below is a graph showing which nations contributed to the overall global revisions.  The Eurozone and Japan were about 1/3 of the downward trend. 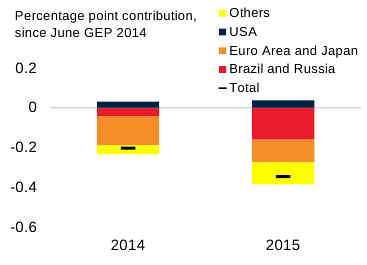 Now one of the things the World Bank objects to is a slowdown in global trade and notice how they blame high income countries for reducing their cheap imports:

Global trade grew less than 4 percent a year during 2012-14, well below the pre-crisis average annual growth of about 7 percent. If global trade had continued to expand at its historical trend, it would have been some 20 percent above its actual level in 2014. The slowdown in global trade has been driven by both cyclical factors, notably persistently weak import demand in high-income countries, and structural factors, including the changing relationship between trade and income. Specifically, world trade has become less responsive to changes in global income because of slower expansions of global supply chains and a shift in demand toward less import-intensive items.

The world bank also seems to think remittances, that is immigrants working in developed nations sending money back home, is expanding, even when other capital flows cease:

One would think lower oil prices would be great news but as one can see, not for all.  One also sees how it is assumed to be OK that developed countries like the United States suffer economically for the benefit of developing countries.  Well, it ain't gonna happen for 2015 at least.  Road trip everyone.