Today, personal incomes fell 0.7%, the largest single drop in 3 years. Consumer spending slowed also. What a surprise, Americans are tapped out, credit card debt is now estimated at $1 trillion, double from 1996 and unpaid debt has increased 22% from one year ago. Here are some statistics from EPI.

While the poor get poorer

Ah, but don't worry, the rich are getting richer: 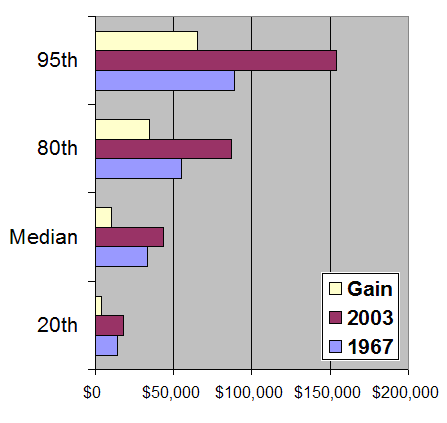 These graphs are the work of Jared Bernstein

And here is the United States in comparison to the rest of the world in economic fairness.

Maybe the middle class is starting to get just a little bit of attention.  Today this news actually affected the stock markets.  It's only after the elites realize without a strong middle class, their money goes down...does working America get any lip service.

Indeed, the United States is being exceeding by the European Union in Purchase Power Parity and while you may believe that China and India are third world countries, their statistics say quite a different picture. These nations are right below the United States in standard of living, before France and Spain.

Trend in Temp Workers may not be Temporary - 23040 reads
The de-industrialization of the U.S. - 55347 reads
The war on the middle class - 213798 reads
Corporate Profits Soaring Thanks to Record Unemployment - 77942 reads
Safeway Skewered for Throwing 6,000 Workers Under the Bus in Video Parody - 333486 reads
Long-Term Unemployed Baby Boomers in 2013 - 131280 reads
Will the NY Attorney General Bring Doomsday Charges Against Wall Street? If So, How Long Will He Survive? - 1151851 reads
U3 and U6 Unemployment during the Great Depression - 243187 reads
Cap & Trade - New Derivatives Market for Wall Street - 19111 reads
Mortgage Deal Under Discussion - Obama Administration and Big Banks - 176398 reads