On The Economic Populist you might have noticed the middle column. We try to list other sites and blogs who have exceptional insight and writing on what is happening in the U.S. economy.

Sometimes though, one cannot say it better but miss those who did. With that, EP is starting the infamous link post series, otherwise known as read this, did you see this? The title of the links series will be the title of this post with the date modified. With introductions over, onto the read this post!

Over on Naked Capitalism is a guest post The Real Reason Giant Insolvent Banks are not Being Broken Up. He has a host of bullet points as to why the obvious hasn't happened and no, it's not because the governent's hands are tied. Just one quote:

The statement by William K. Black (senior S&L regulator and professor of law and economics) that the government's entire strategy now - as in the S&L crisis - is to cover up how bad things are ("the entire strategy is to keep people from getting the facts") makes a lot more sense.

Econbrowser has an exceptional call out post on World Bank President, general nightmare, neocon Zoellick, who recently gave a speech that the U.S. dollar is in trouble as a reserve currency and could be replaced with the Euro. In The Dollar in Doubt?:

In other words, in terms of analysis, the speech was much ado about nothing, although I may be missing some sort of political subtext.

Chen continues into quite an analysis to justify his conclusions.

At the time Zoellick's speech made the news, I didn't post it for the guy is a notorious neocon and what I intuitively thought was oh, yet another traitorous action against the United States instead of any real credibility to the talk.

For gold bugs, we'll point to an article on the other side, betting against the dollar as a reserve currency from Seeking Alpha, Gold Expected to reach $3000. 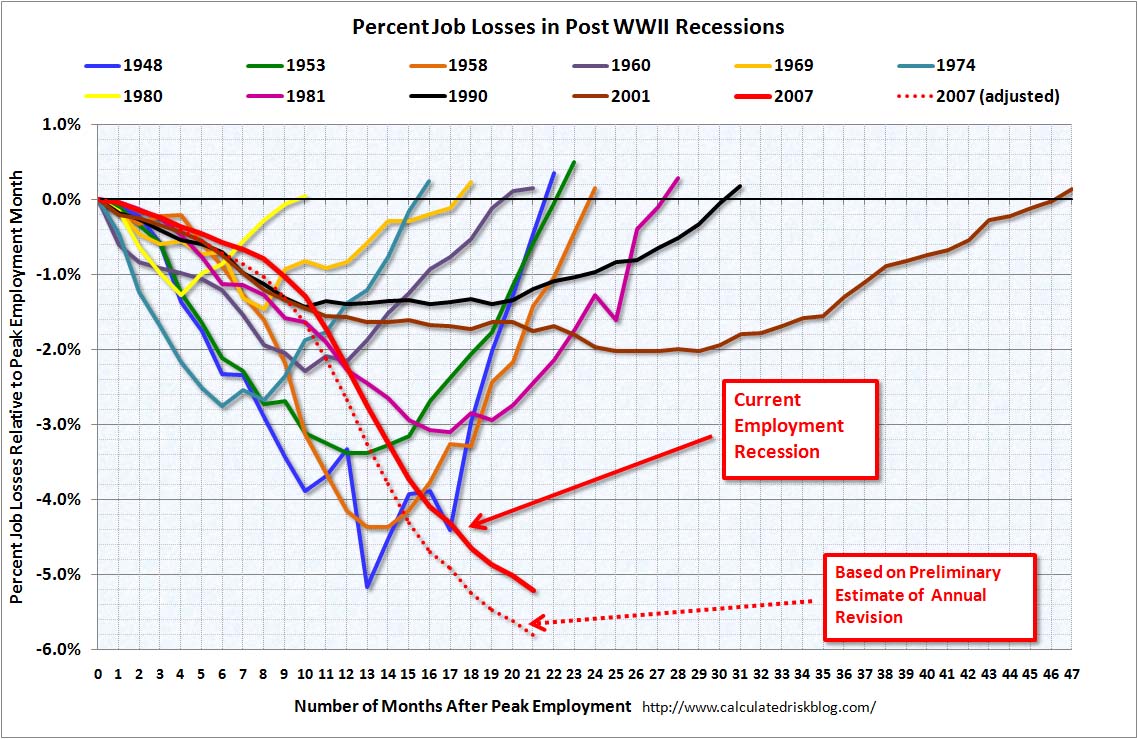 In a Seeking Alpha post, this recession ain't over, is a nice detail on how the unemployment statistics are not based on quantitative data. Check out this Venn diagram visual on just how much we do not know about the U.S. labor market. I agree with this one, we need citizenship status, real quantitative data on the U.S. population to get a true gauge on what is going on in labor markets. As it is the BLS counts foreign guest workers in U.S. unemployment statistics (in the millions, which this diagram completely misses). 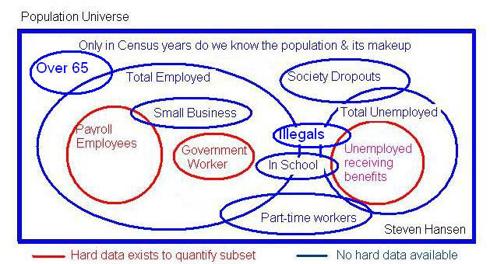 CNN has a front page story on how a $3.9 Billion government program, The Neighborhood Stabilization Program, which is supposed to buy up foreclosed properties, can't, because the banks won't sell 'em. This is the first I heard of such a program and they are supposed to use 25% of this money to help poor people get into homes (where have we seen this before). There are so many programs and such large Federal sums pouring everywhere, it's hard to track what is going where and doing anything. Looks like a poster child for ineffective and inefficient.

Time's The Curious Capitalist has the best summary post on the great the Stimulus has had x effect war that is going on in the MSM, in speeches and in the blogs. (I completely agree, sticking your thumb in the air to measure the wind (multiplier effect), is a pretty damn useless exercise.) He says the title of such pieces should be:

This is what I had in mind many months ago. There is a lot of great reading around the blogosphere that just corroborates what you sense but it is said in a way that is beyond your own words. It is a great public service to highlight these articles for a greater audience. It is also "chicken soup for the soul" for we who fight the populist fight.

I would also suggest that some of the comments made here could be pulled up for the "highlights of the week". Some of James Woolley's comments immediately come to mind; really good stuff that goes unnoticed unless one follows the entire thread. (I do, but I wonder how many lurkers dig this deep).

Anyway, I could suggest several other links that would surely be "food for thought", as well as provide a lightning rod for further comment and discussion. Among them are:

This interview with Noah Raford which delves into his work concerning "Collapse Dynamics: Phase Transitions in Complex Social Systems".

And this interview with Janet Tavakoli, expands further on my instapopulist of last week "It's The Deflation Stupid".

that Tavakoli interview is esp. precious. You could have lifted that summary straight from this site too.

But it's very succinct on what's really going on, great, it's all swept under the rug!

...linky post a regular feature here. A great service this would be. I scour lots of sites for economics stuff, and I had missed three of these.

Safeway Skewered for Throwing 6,000 Workers Under the Bus in Video Parody - 342366 reads
Manufacturing Monday: The so-called Big Three, and the taxpayers' money - 15622 reads
Democrats Running on Empty and Living on a Prayer - 28086 reads
Massachusetts turned Red, but that color isn't what you think it is - 15687 reads
The Economic Populist Site Rank, Statistics and All of That Jazz - 130040 reads
House discusses 401k/IRA confiscation - 223312 reads
March global oil surplus at 17.7 million barrels per day; 2nd qtr surplus to be at 6.2 million bpd despite OPEC-led cuts - 5671 reads
Is the financial system stabilizing? - 17627 reads
As Our Economy is Outsourced to China the Obama Administration Once Again Does Nothing - 36692 reads
Jobs Program Redux - 12634 reads