Consumer spending increased 0.3% from last month, but after taking price increases into account, showed only a 0.1% increase. Personal consumption expenditures are often called consumer spending. Real Personal Consumption Expenditures, or PCE, are about 71% of GDP. Real means chained to 2005 dollars, thus adjusted for inflation. Below is a graph of real PCE. 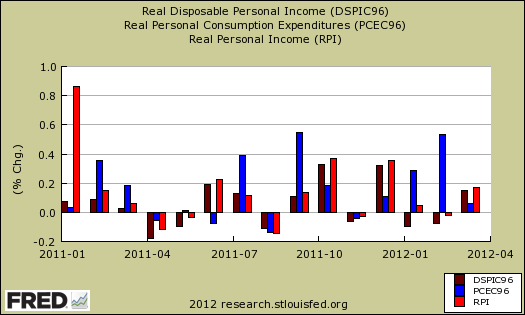 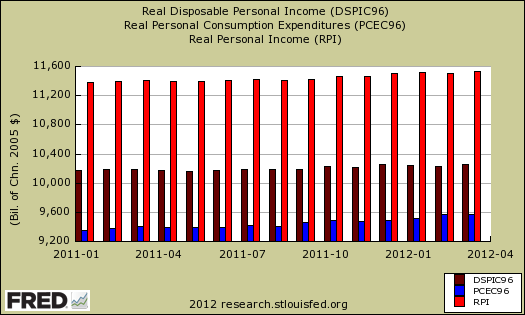 Consumer spending is not just automobiles, smartphones, toys and Starbucks. Things like housing, healthcare, food and gas are the majority of consumer spending. In other words, PCE is about paying for basic living necessities. Graphed below is the overall real PCE monthly percentage change. Health care, for example, is a service. Gasoline is a nondurable good. Cars are a durable good. From the report it appears autos had a bad month:

Personal income increased +0.4% in March and these numbers are the total for everybody in the United States who is reported and not part of the underground economy. Below is personal income, not adjusted for inflation, or price changes. Disposable income is what is left over after taxes. DPI (disposable income), increased 0.4% from last month. That's not because people made way more money, it's because taxes were less.

DPI adjusted for inflation (see the price indexes above), increased 0.2%, from the previous month. These numbers are aggregates, which includes income of the uber-rich, or the 1% of the population, as they are now called. Below is real disposable income per capita. Per capita means evenly distributed per person and population increases every month. March mid-month the U.S. population was 313,612,000. In other words, while on aggregate personal income has increased, so has population to earn that income. When taking increased population into account, we basically have no growth in real personal income. The monthly percentage change for wages and salaries was 0.3%, with total employee compensation, which includes wages, salaries, benefits, also increasing 0.3%. Landlords made out like bandits, rental income increased 0.9% in a month and proprietor's total income increased 0.6%. Personal receipts, income on assets, increased by 0.5%. This is income from non-incorporated businesses, such as the self-employed. Dividend income increased 0.7%. Contributions for government social insurance -- a subtraction in calculating personal income -- increased $2.5 billion in March, compared with an increase of $3.3 billion in February. Personal savings is disposable income minus outlays, or consumption and not adjusted for inflation. The Personal Savings Rate was 3.8% in March.