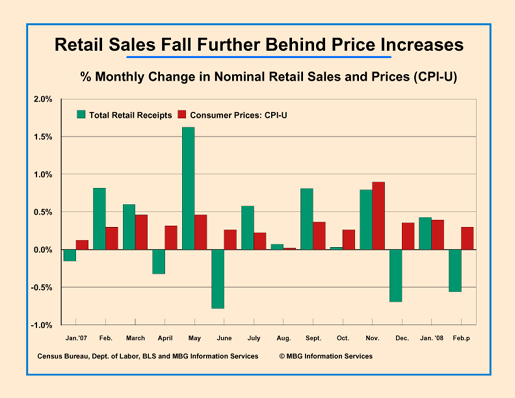 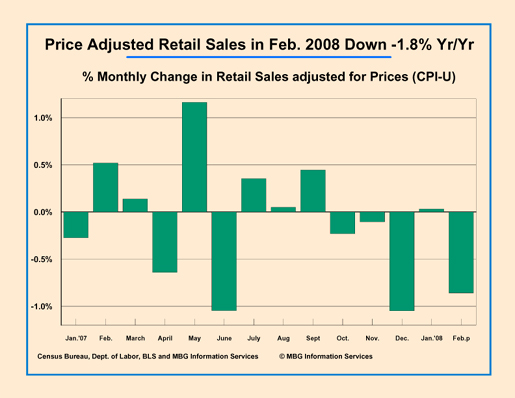 The report now shows retail receipts falling -1.05% behind consumer prices in December vs. earlier estimate of -0.80%. This larger sales decline in December means that the smaller downward revision to January sales results in the month/month January change being revised to a real gain of 0.03% from the earlier estimate of a -0.07% decline.

Data on consumer prices for February will be released tomorrow by the BLS and are expected to show an increase of 0.3% for the month and 4.4% yr/yr. Nominal retail sales yr/yr to February rose only 2.6% suggesting that price-adjusted retail sales are down more than -1.0% yr/yr. This, even with household savings rates negative over the past three months for the first time since 1933.

Today’s report shows a broad decline in even the nominal sales receipts (except soaring costs for job-creating health care!) in most goods and services. Deeply indebted households, already forced to spend down current savings even as their homes’ value decline, now face a cut-back in real wages and paid hours together with a very tough job market and cut-throat global price competition from China and elsewhere.

Years of unprecedented debt-dependence and constant misinformation from all-powerful Wall Street interests may be starting to take their inevitably severe toll.