For the quarter, January to March, retail sales increased 6.6% from the February to April time period one year ago. Nonstore retail sales, which includes online shopping are up 11% from a year ago.

Total retail sales are $408 billion for April. Below is the monthly percentage change of retail sales categories. These numbers are seasonally adjusted. Department stores, part of general merchandise, declined -1.4% from March. 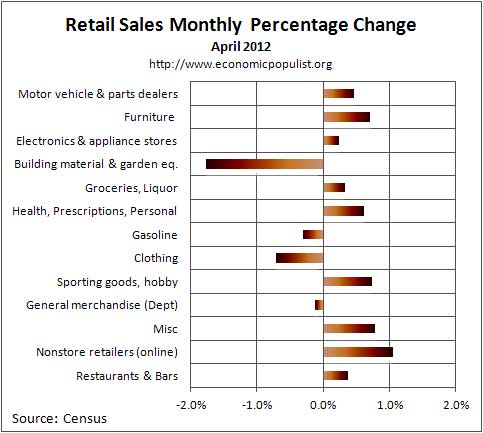 As we can see retail sales are lukewarm to declines, not just declining gas sales due to dropping prices. Below is the April advance report retail sales by volume. 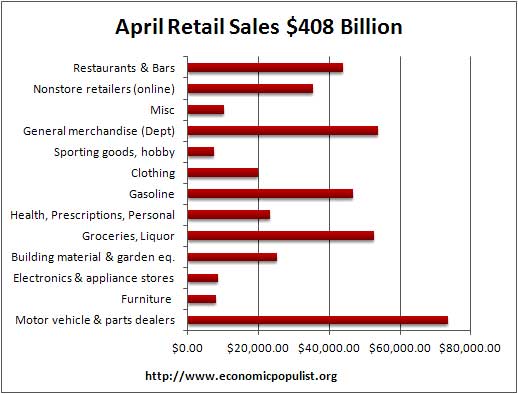 The below chart breaks down seasonally adjusted retail sales by category as a percentage of total April sales. Motor Vehicles & Parts is the largest part of retail sales. 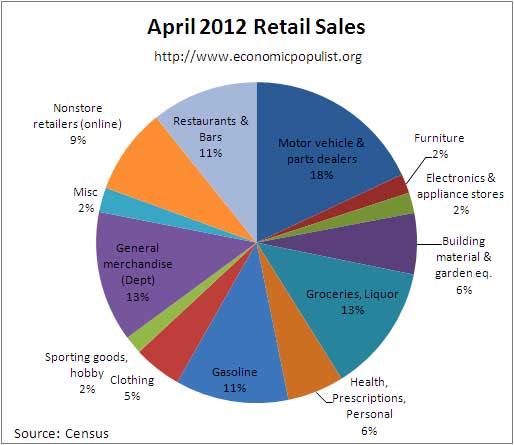 Retail sales correlates to personal consumption, which is about 70% of GDP growth. Yet GDP has inflation removed from it's numbers. This is why Wall Street jumps on these retail sales figures. Below is the graph of retail sales in real dollars, or adjusted for inflation, so one gets a sense of volume versus price increases. To obtain real values, retail sales are deflated using CPI. Below is the annualized monthly percentage change in real retail sales, up to Q1 2012. Retail sales are not adjusted for price increases, not reported in real dollars. Real Economic growth adjusts for inflation. Retail sales has variance, margins of error, and is often revised as more raw data comes into the U.S. Department of Commerce (Census division). For example, this report has an error margin of ±0.5%. Data is reported via surveys, and is net revenues of retail stores, outlets. Online retail net revenues are asked in a separate survey of large retail companies (big box marts). This is also the advanced report. To keep the monthly nominal percentage changes in perspective, below is the graph of monthly percentage changes since 2008. Seasonal adjustments are aggregate and based on events like holidays associated with shopping, i.e. the Christmas rush.

Advance reports almost always are revised the next month as more raw sales data is collected by the Census.

BoA, Wells Fargo, TARP Recipients, Forcing U.S. Workers to Train their Foreign Guest Worker Replacements Before Being Fired - 35494 reads
U3 and U6 Unemployment during the Great Depression - 254867 reads
Occupy Wall Street Labeled "Terrorists" By The FBI - 95860 reads
Safeway Skewered for Throwing 6,000 Workers Under the Bus in Video Parody - 366307 reads
Some Things to Do on Thanksgiving - 21323 reads
The war on the middle class - 224922 reads
Tax Cuts for the Rich Do Not Generate Jobs - 251511 reads
Leapin' LIBOR - Banks Busted For Manipulating InterBank Interest Rates - 71417 reads
House discusses 401k/IRA confiscation - 234342 reads
How Many Jobs Are Needed to Keep Up with Population Growth? - 261279 reads