The revised Q2 GDP figures are out (pdf). Basically the GDP is the same as the advanced released stated, a 1% decrease. (negative 1%)

The decrease in real GDP in the second quarter primarily reflected negative contributions from private inventory investment, nonresidential fixed investment, personal consumption expenditures (PCE), residential fixed investment, and exports that were partly offset by positive contributions from federal government spending and state and local government spending. Imports, which are a subtraction in the calculation of GDP, decreased.

So, as noted in the advanced Q2 2009 GDP post, one can see that increased government spending and the massive drop in imports is what kept the GDP figures from being lower. Imports dropped -15.1% whereas exports dropped -5%. The exports - imports figure added 1.60% to overall Q2 GDP. Note, both are decreased.

What is most amazing is how corporate profits are up, which implies they have been slashing and burning their costs and as usual, implies employees (ex-employees, check out table 13) got the shaft on income.

Now here is a scary number, picked up on by EconomPicData.

in the above GDP equation, investments for future growth and it's like the U.S. economic future is simply gettin' no love. As EconomPicData notes:

Twelve years of growth in investment gone? What is happening? 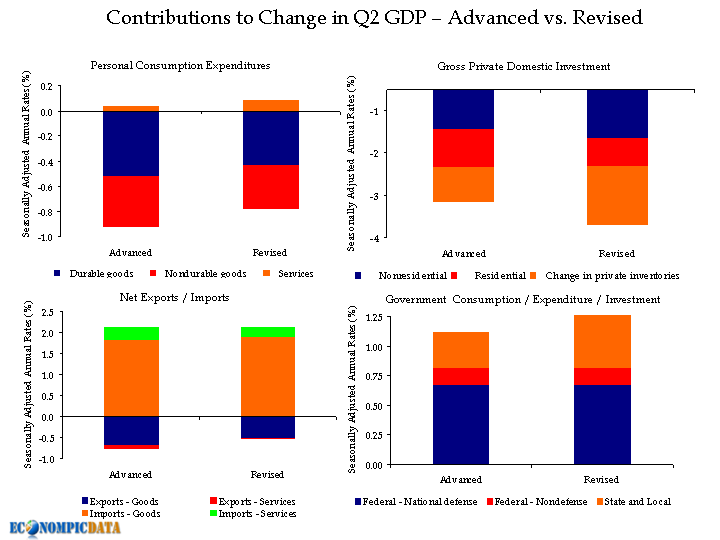 Src: EconomPicData, Click on the graph to enlarge and zoom

Finally, I want to say to all of those jumping the business cycle gun and declaring the recession over. Even for a technical recovery one must have positive GDP growth for at least two quarters. This happy dance is getting a little too ridiculous when one does not even have the data yet.

and is from that EconomPicData you quoted above: 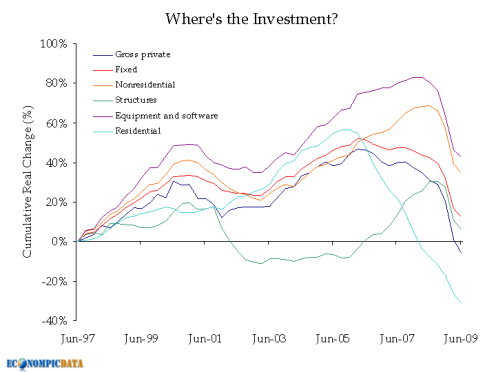 I wanted people to go to his/her site because it's an awesome site generally. I put them in the middle column so you can just click on the latest but (s)he is making original graphs, seemingly from excel and uploading them so we can see the details and is continually showing some very interesting trends, time lines.

I caught the investment numbers but then saw the actual graph and that made it more "whoa, that's bad" than just looking at the tables and comparing for 1 year out and Q1 (where I is a cliff!)

That's the problem somehow on sharing awesome posts on other sites...I'm trying to direct traffic to them as well and not "steal their juju" ....

I would have to say I believe Roubini has jumped on the EP bus and is demanding we return to a production economy immediately. ;)

He's talking about the face Q2 GDP would have been a cliff without government spending, which is true from the components plus if one stops deficit spending...
that also will cause a cliff.....which is true...

and asking about an exit strategy for all of this...

but buried beneath the Dr. Doom classic is almost a little hint of Populist from this globalist...

i.e. how is the U.S. gonna jump start the real economy in order to get out of this cycle?

Interesting...I wonder if he'll get off of his emerging economy addiction.

Based on recent articles it would seem that Roubini has more than "jumped on the EP bus", it would seem he has "jumped the shark"

So, I think Bloomberg, who is cheerleading on LEIs and is railing at someone who simply isn't predicting the stock market.

It's not a fair comparison and on a macro economic view they are seeing some statistics, indicators that are really a problem down the road (debt/deficit).

longest since the Great Depression.

That's another technical definition to note...it is 3 years or more of negative GDP which defines a depression, or a sudden > 10% GDP drop.

So, this NBER recession call was December 2007. So, we're looking at officially 20 months to date.