Over 55 and Desperate for a Job

The Fiscal Times brings home the desperation for unemployed people over the age of 55.

Millions of aging Baby Boomers on the cusp of retirement not only lost their jobs in the Great Recession but also saw their savings eviscerated. Remaining in the labor force longer than planned is their only option for replenishing what they lost.

Yet workers in their late 50s and 60s face bleak job prospects.

7 Billion People Might Be the Reason Commodities are Soaring

Henry Blogett actually wrote something useful and showed how commodity prices are tracking the globe's exploding population. About time someone mentioned the realities of too many people and limited resources. 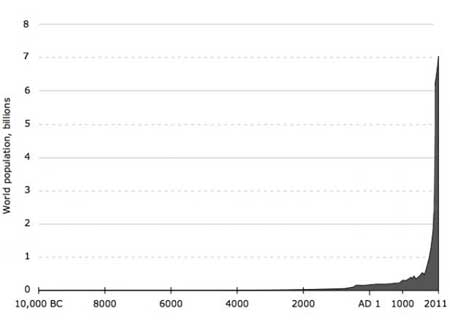 Many of the resources used to sustain this population, meanwhile, have not grown. On the contrary, they've shrunk. Because we've used them up.

Millions have run out of Unemployment Benefits

Here comes extreme poverty. AP reports millions have run out of unemployment with no job in sight:

Employers are crying that they can't find qualified help," he said. But the ones he interviewed with "weren't willing to train anybody."

From late 2007, when the recession began, to early 2010, the number of people receiving unemployment benefits rose more than four-fold, to 11.5 million.

But the economy has remained so weak that an analysis of long-term unemployment data suggests that about 2 million people have used up 99 weeks of checks and still can't find work.

This should thrill more than one. Matt Taibbi, among others, are finally calling out NYC Mayor Bloomberg for doing whatever Wall Street wants:

Bloomberg’s main attraction as a politician has been his ability to stick closely to a holy trinity of basic PR principles: bang heavily on black crime, embrace social issues dear to white progressives, and in the remaining working hours give your pals on Wall Street (who can raise any money you need, if you somehow run out of your own) whatever they want.

I wish they'd also nail him on being the spokesperson for cheap imported labor, per the U.S. Chamber of Commerce demands.

Wonder Why You Crave that Burger, Fries & a Coke?

Guess what, this stuff is addictive as cocaine. Nothing better for sales that addiction. Bloomberg:

A growing body of medical research at leading universities and government laboratories suggests that processed foods and sugary drinks made by the likes of PepsiCo Inc. and Kraft Foods Inc. (KFT) aren’t simply unhealthy. They can hijack the brain in ways that resemble addictions to cocaine, nicotine and other drugs.

“The data is so overwhelming the field has to accept it,” said Nora Volkow, director of the National Institute on Drug Abuse. “We are finding tremendous overlap between drugs in the brain and food in the brain.”

By now you heard of MF Global's bankruptcy and disappearing investor funds. Now the FBI may investigate. Where have we heard that one before?

MF Global Holdings Ltd., which filed for bankruptcy protection almost a week ago, is the subject of a formal FBI investigation opened late this week, a person familiar with the matter said.

The inquiry, in which Federal Bureau of Investigation agents are working with U.S. prosecutors, is in its preliminary stage, and no information requests have been issued as of yesterday afternoon, said the person, who declined to be identified because the matter isn’t public. The decision to begin the probe was made late Nov. 3 or yesterday, the person said, adding that reports of an earlier investigation were incorrect.

MF Global, which was run by Jon Corzine, a former New Jersey governor, filed for Chapter 11 bankruptcy after a $6.3 billion bet on the bonds of some of Europe’s most indebted nations prompted regulator concerns and a credit rating downgrade. Corzine, who once served as a Goldman Sachs Group Inc. (GS) co-chief executive, quit MF Global yesterday and has retained a defense lawyer, according to another person familiar with the matter.

This one comes way of Naked Capitalism. Real News interviews Bill Black on what solutions should be.

The Real News Network, has a YouTube Channel and they have been producing some dynamite economic related interviews and facts generally.

By now most have heard Occupy Wall Street closed the Oakland port. Few realize this is a critical port for chinese imports:

Leaders of the occupy open group have announced that they want to stop "the flow of capital" at the port, a critical facility for the importation of Chinese exports to America.

Port officials sent their employees home by 3:30 to ensure safety, while buses began to arrive carrying protesters. Protesters chanted, "Let's go Oakland!, Take the port!," and "We got sold out!"

Unfortunately the major press just reported supposed violence and such, but ignored the reason the Oakland port was targeted. Yup. OWS must be aware of our record trade deficit with China.

I see that although Mayor Bloomberg is deservedly given a poor review today, Bloomberg News is cited, also deservedly.

He can't be all bad.

Talking population can still be a risky thing. USDA recently hosted a meeting at UC Davis where, my brother-in-law informs me, the projection was made to 8 or 10 billion people. This projection was then used as justification for what apparently is now a USDA policy to withdraw support for organic farming initiatives because only intensive GMO and petroleum-based agri-industrial farming can hope to feed all the hungry people. When I remarked that I did not necessarily believe the projections -- being a skeptic about every projection always -- I found myself somehow in an argument about ProChoice versus ProLife politics.

People are becoming more realistic about over-population and carrying capacity but any discussion of population growth is still mired in emotional quicksand.

The realities of the numbers either brings up what you got sucked into or "immigration". I cannot think of a topic where one cannot simply look at the numbers. Even there, I just saw a spin post claiming fictional numbers are the numbers, so it's really bad. That's probably what I am such a statistical nazi when it comes to those figures, making sure either side doesn't "spin it".

I pity you on that dinner conversation! Welcome back too!

The ILWU is very aware of the importance of Oakland for imports from China (and elsewhere in Asia). ILWU is generally influential in passing FTAs such as recent Korean FTA.

But the ILWU isn't necessarily the same as its members.

I believe that the port could not have been shut down if ILWU and its members had not allowed that to happen.

There is strong reaction to Oakland Police repression, including head fracture of returned vet with two tours in Iraq.

This whole thing is way beyond anything I considered to be within the bounds of what is possible just a few months ago. There was some posting here at EP, more or less predicting something like this, but I just could not see it.

Dreaded Chinese curse: "May you live in interesting times."