Spain is also in a recession.

Economic output shrank by 0.4 percent in the three months from April to June having slumped by 0.3 percent in the first quarter, the Bank of Spain said in its monthly report.

Spain's bonds were soaring as were Italy's and they just placed a ban on short selling, seemingly of all financials.

Spain's stock market regulator banned short-selling on all Spanish securities on Monday for three months and said it may extend the ban beyond Oct. 23.

This seems to have temporarily abated the soaring bond prices. Spain's bonds are now up 3.18% as of the writing of this article. Italian bonds are up 2.77%. This is off the soaring highs earlier today of 7.5% and 6.33% for Spanish and Italian sovereign bonds yields, respectively.

The Euro has also tumbled to record lows:

The 17-nation currency is at the lowest level since 2003 on a trade-weighted basis, according to a Deutsche Bank AG index that includes the yen, pound and Swiss franc. The European Central Bank’s July 5 reduction of its deposit rate to zero spurred investors to borrow euros to buy higher-yielding assets elsewhere, generating gains from the carry-trade for the first time in two years.

Even though the euro has slumped 24 percent from a high of $1.6038 in July 2008 as the debt crisis threatens to push the region into recession for a second time in three years, the drop is only about half the collapse versus Australia’s dollar. At the same time, the euro’s depreciation following ECB President Mario Draghi’s rate cuts is making exports more competitive and damping concern that the currency union will break up. 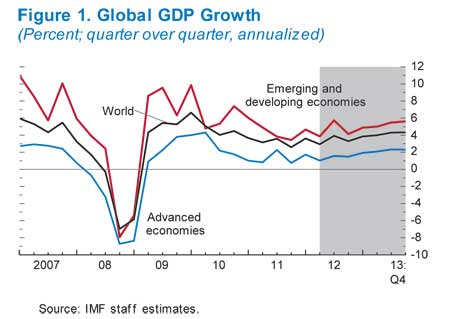 The IMF nailed it on the never ending European crisis. We have a negative feedback loop creating never ending oscillating bad news financial waves. Below is their take on Europe, along with their graphic.

The euro area periphery has been at the epicenter of a further escalation in financial market stress, triggered by increased political and financial uncertainty in Greece, banking sector problems in Spain, and doubts about governments' ability to deliver on fiscal adjustment and reform as well as about the extent of partner countries' willingness to help. Escalating stress in periphery economies has manifested itself along lines familiar from earlier episodes, including capital outflows, a renewed surge in sovereign yields (Figure 3), adverse feedback loops between sovereign stresses and banking sector funding problems, increases in Target 2 liabilities of periphery central banks, further bank deleveraging, and contraction in credit to the private sector. The stabilizing effects of the ECB's LTROs in periphery financial markets have thus eroded. On the real side, leading economic indicators presage renewed contraction of activity in the euro area as a whole in the second quarter. 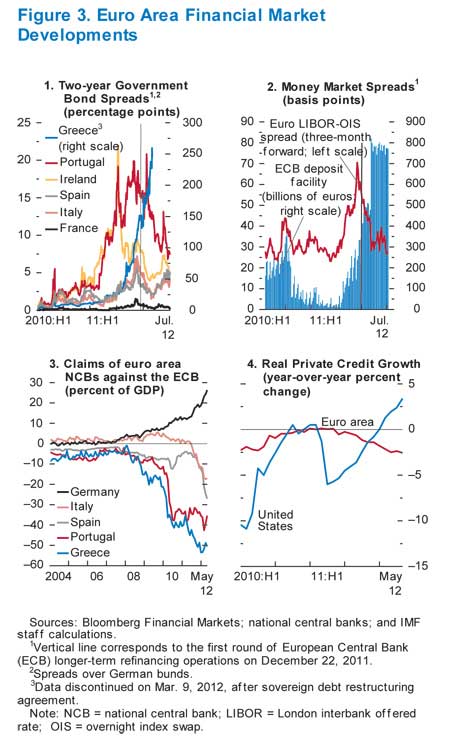 The crisis, events are so fast moving, the U.K. Telegraph is running a real time blog.

Greece is in more trouble again with Germany saying:

If Greece no longer meets its requirements there can be no further payments,” he said in an interview with German public broadcaster ARD. “For me, a Greek exit has long since lost its horrors.

With those statements it appears Germany wants to muscle Greece out of the Eurozone.

There is no doubt this story will drone on and on, with politicians making stupid statements, markets reacting and the never ending slow motion implosion continuing. Expect more press releases, ECB plans, Eurozone financial minister meetings, market rallies and then more crash and burns. Resolution, of course, doesn't seem to be on the table. About the only thing one can really say is for the most part, austerity demands amplify the economic implosion of Europe. Meanwhile we are three years into the official so called economic recovery. Everybody see that?

Update: As predicted, today we have rumors that the ECB will come to the rescue of Spain and Italy:

Financial markets bounced on Wednesday as hopes of further intervention in the eurozone by the European Central Bank gave some respite to investors.

Indications that the ECB could boost the firepower of the eurozone bailout fund pulled European shares out of their slump and eased interest rates on Spanish bonds. There was also relief after the German government said it was not urging Spain to take a full bailout.

The never ending European crisis continues with never ending reports that something will be done and never ending events which show the situation is worse than originally reported.

Back when things made some sense, if a so-called expert was wrong more than say once, or twice, or three times in any field, he/she would lose credibility and be ignored. There are only so many times a civil engineer can miscalculate maximum loads before he is deemed incompetent and/or causes deaths. A helicopter pilot can make a major mistake regarding his fuel requirements once before he, and those with him, pay a personal price. These people earn much less than the business and political "experts," but I'd trust them much, much more to do the right thing. Now we see the Eurozone mockery the epitome of the exact opposite. How many times have we seen Eurozone elected and unelected officials attend weekly meetings and crisis summits in their motorcades and eat at fancy restaurants, announce resolution, and be proven time and time again to achieve nothing that anyone that understands a little bit of three-card Monte, economics, politics, international relations couldn't forecast? Same with endless tripe coming from global media and people in companies and politics around the globe. The tragedy is nowadays the honest people with insight are ignored, but the people who continue to spout the lies keep on raking in the dough with no employment problems because they toe the line. And when the Euro collapses very soon, and it will, these same buffoons will have no shame, claim they saw it coming, maintain they were, and are, completely honest + intelligent, and then make millions more both analyzing what happened and then moving on to some other shell game. Just another symptom of how manipulation and lies make many rich, while those on the outside are looking at Louis XVI and Versailles not for leadership, but to show all that is wrong with the current power and moral structure.

Can someone please explain why we should care about Greece?

Greece's economy is smaller than the state of Massachussets.

Was I the only one back in the day that thought the Eurozone was a bad idea?

All of those lovely derivatives, CDSes on sovereign debt are like dominoes. They did in part take a haircut but volumes to go.