After historically fast job growth in May and June, the jobs report for July is sure to disappoint. Because so many jobs were lost in March and April, the economy remains 14.7 million jobs short of where it was in February, and a full recovery even with rapid growth is many months away. As COVID-19 has spread rapidly throughout the country, various other data released since the reference period in mid-June suggest—at best—a stalled recovery. At worst, we could see job losses in July. Whichever is the case, it is clear that the bounceback in May and June is over and that the mammoth jobs gap will take years to claw back unless policy becomes much better on both the public health and economic fronts.

In this preview post, I’m going to take you on a brief foray into the data that predict a very disappointing economic performance for this week’s jobs report. First, let’s start with the weekly unemployment insurance data. As of mid-July, 34.3 million workers—or about 20% of the pre-pandemic workforce—were either on unemployment benefits or have applied and are waiting to see if they will get benefits. Although the continuation of record high levels of unemployment insurance may include some pent up demand from the difficulty of accessing the system, there has been no measurable improvement in these unemployment insurance numbers in weeks.

Second, let’s turn to the Census Bureau’s Household Pulse Survey. Data collection has occurred every week since April 23 and the survey asks questions about the impact of COVID-19 on people’s lives, notably with details on employment. One key question asked is whether the respondent was employed in the last seven days. According to my analysis of the published tables, employment dropped by 6.7 million from the survey week for the June jobs report to the survey week for the July jobs report. This suggests a reversal, not a slowdown, in the recovery. This should not be a shock. As many have noted since the beginning of the coronavirus shock, economic recovery depends entirely on success in managing the spread of the virus, and this management has failed spectacularly since early June. There is a strong correlation between faster growth in COVID-19 cases and faster declines in employment, as illustrated by economist Aaron Sojourner here. Further, analysis by economist Arin Dube strongly suggests that these trends are driven by a slowdown in states that experienced a resurgence in COVID-19 cases, namely in Arizona, California, Florida, Georgia, and Texas.

Third, employment changes reported by Homebase have also been quite useful to uncover details on the labor market because the data are available on a daily basis for hourly workers at thousands of small businesses. Maximiliano Dvorkin and Asha Bharadwaj at the Federal Reserve Bank of St. Louis analyze Homebase data to predict the monthly employment numbers. Using comparable data for June and July reference periods, they find that there has been a slowdown and slight reversion in employment since the week of June 12. As with the Household Pulse Survey, they find that the states which recovered the least in that period (Arizona, Florida, and Texas) also experienced a large number of COVID-19 cases.

Other data, such as from Open Table, suggest that economic activity flatlined between mid-June and mid-July, again suggesting at the very best a stalled recovery. Whether the jobs report comes in around zero or negative, it is clear that rising cases have measurably slowed the economic recovery. And, I fear, the recovery will remain stalled for quite some time if more financial support for workers, their families, and state and local governments is not forthcoming now and through the pandemic-driven recession.

Last week 1.6 million workers applied for unemployment insurance (UI) benefits. Breaking that down: 984,000 applied for regular state unemployment insurance (not seasonally adjusted), and 656,000 applied for Pandemic Unemployment Assistance (PUA). Some headlines this morning are saying there were 1.2 million UI claims last week, but that’s not the right number to use. For one, it ignores PUA, the federal program that is serving millions of workers who are not eligible for regular UI, like the self-employed. It also uses seasonally adjusted data, which is distorted right now because of the way Department of Labor (DOL) does seasonal adjustments.

Republicans in the Senate allowed the across-the-board $600 increase in weekly UI benefits to expire. Last week is the first week of unemployment in this pandemic that recipients will not get the extra $600 payment. That means people on UI benefits who lost their job during a global pandemic are now are forced to get by on around 40% of their pre-virus earnings, causing enormous pain.

Republicans in the Senate are proposing to (essentially) replace the $600 with a $200 weekly payment. That $400 cut in benefits is not just cruel, it’s terrible economics. These benefits are supporting a huge amount of spending by people who would otherwise have to cut back dramatically. The spending made possible by the $400 that the Senate wants to cut is supporting 3.4 million jobs. If you cut the $400, you cut those jobs. The map in Figure A shows the number of jobs that will be lost in each state if the extra $600 unemployment benefit is cut to $200. 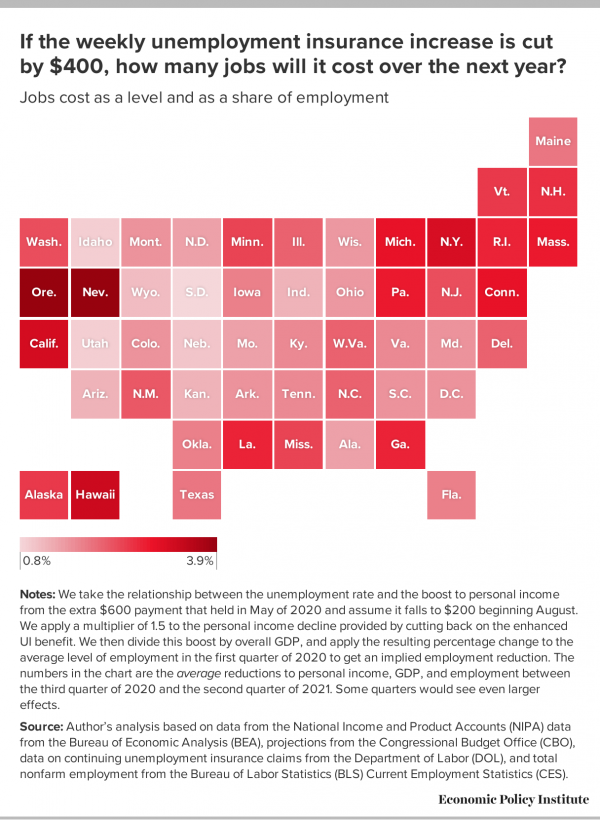 The Trump administration has floated the alternate idea of dropping the $600 to $400. First, the administration can’t do anything in this space without Congress. Further, dropping the $600 to $400 would still cost 1.7 million jobs. Because we did not put the public health measures in place necessary to successfully reopen, the coronavirus has spiked, and the jobs gains we saw in May and June have stalled, if not reversed. Now is not the time to cut benefits that are supporting jobs.

But what about the potential work disincentive of the extra $600? After all, the additional payment means many people have higher income on unemployment insurance than they did from their prior job. It turns out that the concern about the disincentive effect has been massively overblown. In fact, rigorous empirical studies show that any theoretical disincentive effect has been so minor that it cannot even be detected. For example, a study by Yale economists found no evidence that recipients of more generous benefits were less likely to return to work. A case in point: in May and June—with the $600 in place—7.5 million people went back to work. And, about 70% of likely UI recipients who returned to work were making more on UI than their prior wage. Further, there are 14 million more unemployed workers than job openings, meaning millions will remain jobless no matter what they do. Slashing the $600 cannot incentivize people to get jobs that are not there. Even further, many people are simply unable to take a job right now because it’s not safe for them or their family, or because they have care responsibilities as a result of the virus. Slashing the $600 cannot incentivize them to get jobs, it will just cause hardship.

Slashing the $600 will also exacerbate racial inequality. Due to the impact of historic and current systemic racism, Black and brown communities are suffering more from this pandemic, and have less wealth to fall back on. They will take a much bigger hit if the $600 is cut. This is particularly true for Black and brown women and their families, because in this recession, these women have seen the largest job losses of all.

Figure B combines the most recent data on both continuing claims and initial claims to get a measure of the total number of people “on” unemployment benefits as of August 1. DOL numbers indicate that right now, 33 million workers are either on unemployment benefits, have been approved and are waiting for benefits, or have applied recently and are waiting to get approved. But importantly, Figure B provides an upper bound on the number of people “on” UI, for two reasons: (1) Some individuals may be being counted twice. Regular state UI and PUA claims should be non-overlapping—that is how DOL has directed state agencies to report them— but some individuals may be erroneously counted as being in both programs; (2) Some states are likely including some back weeks in their continuing PUA claims, which would also lead to double counting (the discussion around Figure 3 in this paper covers this issue well). 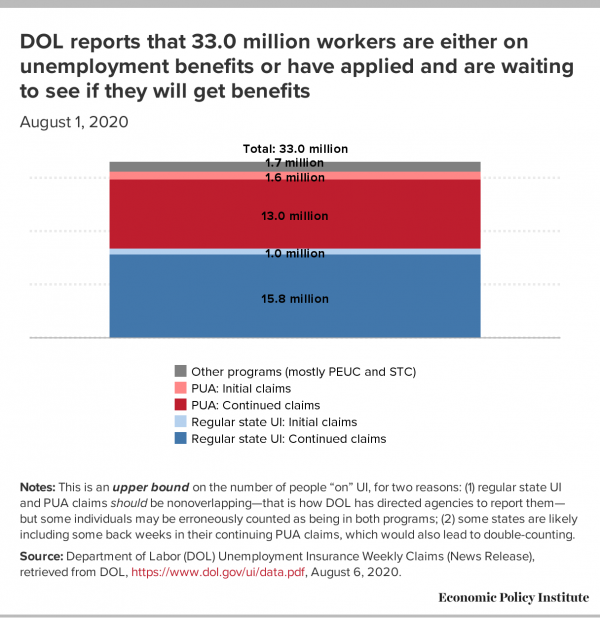 Figure C shows continuing claims in all programs over time (the latest data are for July 11). Continuing claims are nearly 30 million above where they were a year ago. However, the above caveat about potential double counting applies here too, which means the trends over time should be interpreted with caution. 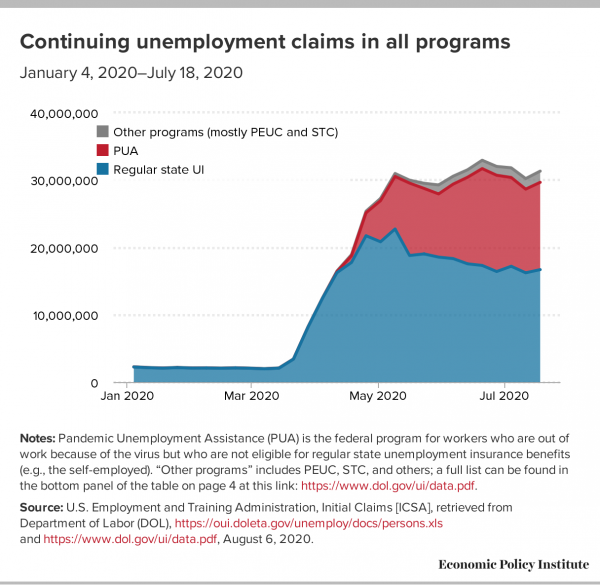