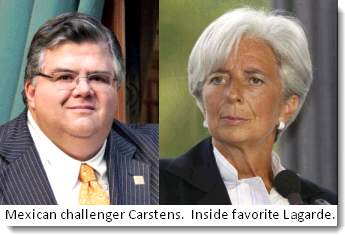 The World Bank released a report Prospects for the Global Economy.

Here are some highlights for the year of the dog (sic) 2009:

This explains why the banking system is in such bad shape.


(Bloomberg) -- The value of global financial assets including stocks, bonds and currencies probably fell by more than $50 trillion in 2008, equivalent to a year of world gross domestic product, according to an Asian Development Bank report.

Asia excluding Japan probably lost about $9.6 trillion, while the Latin American region saw the value of financial assets drop by about $2.1 trillion, said Claudio Loser, a former International Monetary Fund director and the author of the report that was commissioned by the ADB. The report didn’t give a breakdown of asset declines in other regions.
...

What ever changes we make to our financial regulations, hopefully we'll ensure that we can never have another AIG putting the entire global financial system at risk. Unfortunately, our track record of building regulations is terrible. In fact, in many ways the last round of regulatory reform helped cause the disaster in AIG. How could AIG's destruction have been caused by banking regulation? Most people wil probably be surprised by the very idea. After all, they've been told that what really happened to AIG involved unregulated credit default swaps, insurance contracts on bonds that AIG sold across the world. They suspect AIG might have been caused by too little regulation.

The de-industrialization of the U.S. - 48169 reads
Offshoring from Sea to Shining Sea - 74421 reads
Safeway Skewered for Throwing 6,000 Workers Under the Bus in Video Parody - 328052 reads
Trend in Temp Workers may not be Temporary - 21974 reads
California is officially flat broke - 92779 reads
The Cost of Left-Wing hate - 113446 reads
One cold snap uses 11.5% of US natural gas supplies; 8 more weeks like that and our gas storage will be totally empty - 86097 reads
Will the NY Attorney General Bring Doomsday Charges Against Wall Street? If So, How Long Will He Survive? - 1149217 reads
Ron Paul's Rotten Apple - 15716 reads
New York Post Claims Census Falsifies Unemployment Figures - 874586 reads