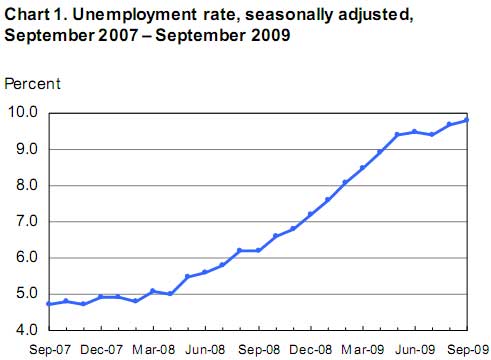 The unemployment rate for Americans 16 to 24 years of age has hit the highest rate since the Great Depression.


The unemployment rate for young Americans has exploded to 52.2 percent -- a post-World War II high, according to the Labor Dept. -- meaning millions of Americans are staring at the likelihood that their lifetime earning potential will be diminished and, combined with the predicted slow economic recovery, their transition into productive members of society could be put on hold for an extended period of time.
And worse, without a clear economic recovery plan aimed at creating entry-level jobs, the odds of many of these young adults -- aged 16 to 24, excluding students -- getting a job and moving out of their parents' houses are long. Young workers have been among the hardest hit during the current recession -- in which a total of 9.5 million jobs have been lost.

From Christopher Swann from Reuters: The danger of a lost generation

NEW YORK, July 24 (Reuters) - For the first time in three generations, Americans across the nation are facing the threat of long-term unemployment. Already more than one in four jobless Americans have now been out of work for more than six months, the highest level since records began in 1948.

For both individuals and national economies, long-term joblessness has proved to be extremely corrosive. Skills atrophy after extended periods of enforced indolence. Then, when an economy recovers, these workers are no longer in a position to fill new jobs.

A poll of economists has been released, and it isn't very encouraging.

Unemployment will average 8.5 percent in 2011 after a 9.6 percent rate next year, higher than previously expected, according to the median forecast in the survey taken from May 4 to May 11. The economy may expand 2.8 percent in 2011, less than estimated last month, after a 1.9 percent rise in 2010.

“The worse the labor market is and the longer that lasts, the more difficult it’ll be for consumers to recover,” said Joshua Shapiro, chief U.S. economist at Maria Fiorini Ramirez Inc., a New York forecasting firm. “The economy isn’t going to come roaring out of the box here.”

By now we've all seen this story.

That's pretty bad, but would you believe that the real numbers are actually worse?

It gets worse. The number of people no longer counted as in the labor force increased by 339,000 in the past month (seasonally adjusted).

I was thinking of putting a poll up on guessing today's unemployment numbers earlier, but if I had, no one would have gotten it right because I wouldn't have gone high enough.

From the Bureau of Labor Statistics the number of unemployment actively looking for work, 5,645,000. 2.6 million of those people lost their job in the last 4 months.

So why is it the Government won't even acknowledge they offshore outsource jobs using taxpayer money. That's right, both Federal and State governments ship work overseas. This is especially true in state social services.

Merrill Lynch has a real unemployment estimate out and it ain't pretty.

what the official unemployment rate misses is the vast degree of ‘underemployment’ as companies cut back on the hours that people who are still employed are working. Those hours have declined 1.2 percent in the past 12 months.

The BLS still counts people as employed if they are working part time, but the number of workers who have been forced into that status because of slack economic conditions has ballooned nearly 70 percent in the past year, according to the study. Rosenberg said was that was a record growth rate for the 15-year period he has studied.

A polling of economists are now expecting the unemployment rate to jump to 6.8% for November. 6.8% is the median.

U.S. payrolls probably shed 316,000 jobs in November, following October's drop of 240,000 jobs, according to economists polled by Reuters. The unemployment rate is seen rising to 6.8 percent in November from October's 6.5 percent

The Labor Department said on Friday the jobless rate rose a steep four-tenths of a percent to 6.5 percent in October, the highest since March 1994, and that job losses in September and August were deeper than previously thought.

So far this year 1.2 million U.S. jobs have been lost, with 651,000 in the past three months alone as the slide in the national labor market picked up in intensity

Nonfarm payroll employment fell by 240,000 in October, and the unemployment rate rose from 6.1 to 6.5 percent, the Bureau of Labor Statistics of the U.S. Department