The March 2013 S&P Case Shiller home price index shows a 10.9% price increase from a year ago for over 20 metropolitan housing markets and a 10.3% change for the top 10 housing markets from March 2012.  This is the highest yearly gain since April 2006.  Prices are soaring at the same pace as the housing bubble return.  Not seasonally adjusted home prices are now comparable to October 2003 levels for the composite-20 and December 2003 for the composite-10.   Below is the yearly percent change in the composite-10 and composite-20 Case-Shiller Indices, not seasonally adjusted.

Below are all of the composite-20 index cities yearly price percentage change, using the seasonally adjusted data.   All city home prices have had positive gains for three months in a row.  Phoenix prices just keep soaring, up 22.4% from a year ago and Las Vegas, ground zero for the housing bubble, is up 20.6%.  San Francisco is now up 22.3%, back to it's have and have not housing market where one needs to be a millionaire to own a home.  Twelve of the 20 cities saw double digit annual home price increases in their respective areas.  Double digit gains imply the housing bubble has been re-established as home prices are clearly out of reach again for most. 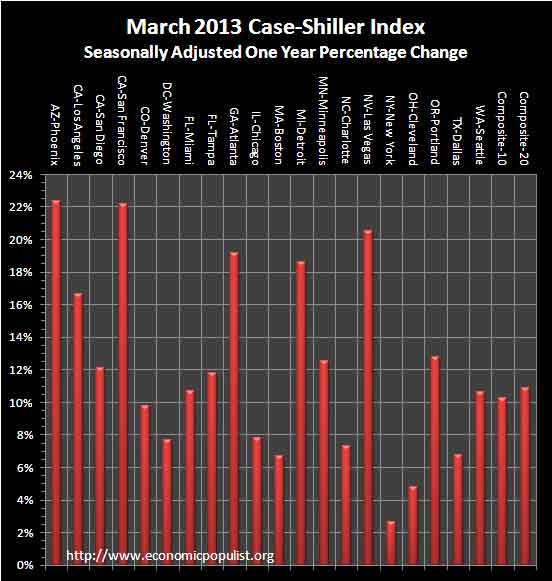 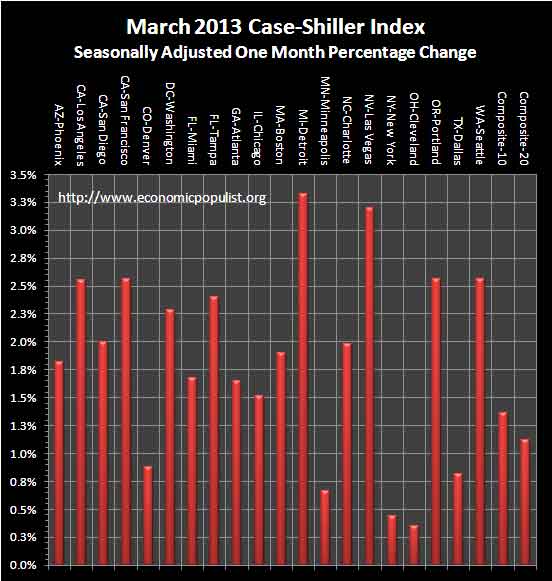 Below are the seasonally adjusted indices for this month.  The index itself tells you what has happened to home prices, per city, from the year 2000.  Only Detroit is below their 2000 home price values with Atlanta just barely at 2000 price levels. 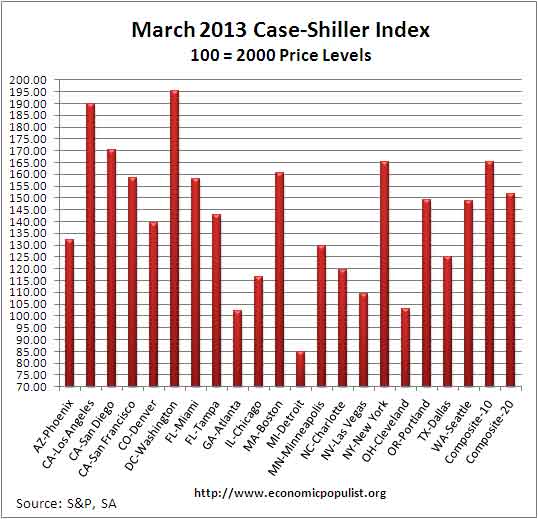 S&P estimates home prices are down approximately 28-29% from the height of the housing bubble's June and July 2006 price peaks.  These statistics use the not seasonally adjusted home price indices.  The question now is who is buying up all of these homes?  Somehow we do not believe institutional investors making fast profits means the housing market has returned to healthy levels.  To wit, the Census released homeownership rates and for Q1, they are down to Q4 1995 levels.  Rents are also increasing.  Both of these metrics do not support your average person buying a home and instead to institutional investors and potentially inventory being kept off the market, such as bank owned foreclosures.