Corporate profits with inventory valuation and capital consumption adjustments, after tax, increased 3.3% from last quarter to $1,526.6 billion and are up 4.0% from one year ago. Corporate profits with inventory valuation and capital consumption adjustments, pre-tax, increased $11.3 billion to $1,989.2 billion, or up 3.5% from Q2 and still up 8.7% from a year ago. These are profits from current production. Net cash flow, with inventory evaluation adjustment increased 2.4% from Q2 to $1,886.8 billion. This is a 1.1% change from a year ago. These are the corporate funds available for investment according to the BEA. The ones who made out like bandits were the financial industries. Their profits increased 71.3% from Q3 to $460.5 billion. Nonfinancial industrials profits declined -0.1% to $1,095.1 billion. 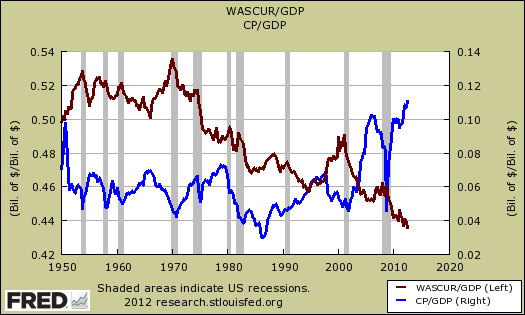 We see various figures for corporate profits quoted elsewhere that are not accurate and this makes things even more confusing. The BEA reports corporate profits in a variety of ways and it seems whatever one's focus and political predilections are implies which number they use.

Oh well, just another day, just another lie exposed for the umpteenth time.
So with these CEOs making record profits by cutting employees (Citi just laid off 11,000+) and lowering wages for everyone else, why am I treated to these CEOs on my TV appearing 100X/day lecturing us on how to avoid the fiscal cliff and how we should force Grandma Millie to eat more cat food (and eventually her cats) to survive? Why do I have to listen to Blackrock banksters and Goldman folks lecture us on how to suffer more under austerity so that they can make even more profits? I never see someone from 99.9% of the American workforce speaking on Bloomberg or Fox or CNN. It's always big CEOs that have no clue how the 99.9% live (actually, they do, they just don't care) lecturing us on how we should sacrifice and how their politicians should follow their advice. For some reason that advice never involves them sacrificing. Teddy Roosevelt's "bully pulpit" has been replaced by the oligarchs' bully pulpit - bought and paid for by them. By the way, Transparency International ranks the US still in the top 20 of least corrupt nations. That's laughable, we're way beyond that point.

and then they lay off over 11,000. Exactly Kurtz and this is why we overview statistics. Corporate profits and Wall Street have never done better, yet they labor arbitrage the workers to the point they are destroying the nation.

Directly from one paper: "Michael Corbat's opening act, unveiled Wednesday, was an immediate hit with investors." And isn't that what it's all about in the USA of 2012? Making investors happy? Now, never mind the fact that Joe and Jane Taxpayer now have to help these newly unemployed people (and rarely do these big cuts involve top-level people) during their search for jobs, which as we all now, will last until many of them drop off the charts/become homeless/get Social Security at 80+ (damn you 75 year olds, stop being lazy and convince those employers to hire you). How many of these people are over 40+? Because they are doomed, doomed, DOOMED. That's 11,000 less people paying into taxes at the local, state, and federal levels, or as many CEOs and politicians call them - lazy shirking idiots. And in their communities, less $ for cops, fire, schools, etc. But ignore the broader social consequences of 20%+ unemployment, that requires real thought on a broad level.

So, we've seen blue collar jobs go bye-bye. Steel? Well, Japan took that. And now Korea and China, and they will go the same way we have eventually. Cars? Japan, then Korea and China, and . . . Manufacturing of any kind? Gone. White collar jobs in finance and tech stolen? Yup, going bye-bye, importing workers and exporting it. So what's left. Well, let's ask some of the architects of our destruction.

Bill Clinton is too busy stroking his ego and narcissism at political conventions while some people actually think he and his wife actually relate to the middle class. But, but he's just like me, you know, collecting $100,000 - $300,000 for speaking at Goldman Sachs for past deeds. Yeah, how's NAFTA working out for us? How's deregulation and elimination of laws that helped protect us all working out? Glass-Steagall, no, who needs that when FDIC-backed bankers can bet trillions in Vegas and AC-like casinos and we bail them out when it all goes wrong.

Greenspan? No worries there. He did browbeat people who knew derivatives would destroy us. He loved the Internet and property bubbles that he helped created ("wealth effect" - reminds me of another Fed Chair). And he has a wife covering his ass on a MSM channel. But now he continues to play coy like he cared/cares.

Dem and GOP - who cares, all the same.

Blue collar, white collar, all gone. Nothing left. NOTHING as far as jobs to support one adult, let alone a spouse or kids in this country.

I'm pretty sure it's HFT, in the algorithms, automated and truly not in economic, corporate profit reality and most assuredly not in the national economic interest reality.

Ya got it, the minute layoffs are announced investors "load up" on the stock. Although Citigroup's profits alone are reason they would load up but as a general rule, Wall Street rewarded labor arbitrage.

END_OF_DOCUMENT_TOKEN_TO_BE_REPLACED

BoA, Wells Fargo, TARP Recipients, Forcing U.S. Workers to Train their Foreign Guest Worker Replacements Before Being Fired - 35936 reads
Leapin' LIBOR - Banks Busted For Manipulating InterBank Interest Rates - 71717 reads
The Cauldron: Healthcare costs, pension funds, LBOs, SPACs and PIKs - 24306 reads
Safeway Skewered for Throwing 6,000 Workers Under the Bus in Video Parody - 366510 reads
Fraudulent Foreclosures Running Amok - 27966 reads
Why aren't these people in jail? - 44315 reads
Occupy Wall Street Labeled "Terrorists" By The FBI - 96026 reads
Cars, Suburbia, and Conspiscous Consumption - 12390 reads
2.4 million jobs lost due to China from 2001-2008 - 65047 reads
The High Cost of Health Care in the USA - 29007 reads
Will the NY Attorney General Bring Doomsday Charges Against Wall Street? If So, How Long Will He Survive? - 1170446 reads
New York Post Claims Census Falsifies Unemployment Figures - 885137 reads
Safeway Skewered for Throwing 6,000 Workers Under the Bus in Video Parody - 366414 reads
How Many Jobs Are Needed to Keep Up with Population Growth? - 261314 reads
U3 and U6 Unemployment during the Great Depression - 254882 reads
Tax Cuts for the Rich Do Not Generate Jobs - 251536 reads
Delusions of Normalcy 2011 - Dismal Scientists Cheer Up - 238858 reads
VAT or Value Added Tax is Getting a Look in D.C. - 238768 reads
House discusses 401k/IRA confiscation - 234383 reads
The war on the middle class - 224950 reads