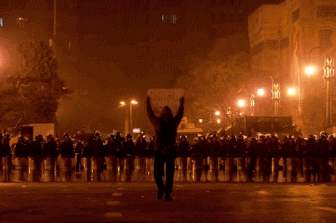 Eighty million Egyptians have suffered under an oppressive regime for thirty years. President Hosni Murbark became Egypt's president and dictator in 1981 after the assassination of the late President Answer Sadat in 1981. Sadat had just completed a peace treaty with Israel. Since then, Mubarak has ruled through emergency law for all but 18 months. Using this law, the government has the, "right to arrest people without charge, detain prisoners indefinitely, limit freedom of expression and assembly, and maintain a special security court." The Egyptian parliament extended for two years in May 2010. For those who get too far out of line, there are the famous torture facilities of the national police.

The Egyptian revolution followed the successful peoples uprising in Tunisia just days before. The Egyptian economy has not performed for the people. The majority of Egyptians live in substandard conditions and they see little reason for hope. Conditions were no better in Tunisia. Future hot spots for revolution, Algeria and Yemen, are equally bereft of the conditions that allow for human dignity - gainful employment, health, and safety.

Children are particularly hard hit, one third of Egypt's population. A recent UNISEF that, "Increases in child mortality and morbidity, child labour, child exploitation, violence against children and women and other forms of abuse, alongside declines in school attendance and the quality of education, nurture, care and emotional wellbeing, can all be traced to times of economic crisis." (Harper et al, 2009). The Egyptian economic crisis has been devastating to children.

Graph source: UC Atlas of Global Inequality
The conditions in Egypt are different from those in the United States in terms of income and material wealth. On a structural level, however, the class inequalities mirror those faced here. A robust stock market failed to translate into employment gains or basic benefits for the vast majority. Policies are friendly to businesses but discriminated against worker rights and unions. Privatization has sapped the public coffers.

While conditions were building up to a boiling point, the Egyptian Stock Exchange became a favorite for foreign investors. Somehow, the geniuses on Wall Street convinced President Mubarak to privatize and adopt a market economy[crony capitalism]. He did, the people suffered more, and the results led to the near universal demand that Mubarak step down. The globalization of crony capitalism has reached the point where the main stimulus is revolution.

Things were fine for the Egyptian stock exchange until the people had enough. Bloomberg

The coverage of Egypt's revolution has been a bit timelier than the Tunisian affair, which the corporate media nearly missed. The initial focus was on events and the questions determining the survival of Hosni Mubarak. Who will win? There was no explanation of conditions prompting the protests. That would legitimized the protesters and foreclose media manipulation that may be needed to continue the three decade support for the present dictatorship and oligarchy.

A Wall Street Journal article Sunday laid out the talking points for fear mongering and the false dilemma - support a peoples revolution or take an oil shock and more terror.

US stocks are taking a big hit because of the revolution. We're supposed to react by thinking, Is this really worth it? The recession may get worse.

The specific fear of oil price increases appears. Somehow, we're asked to believe that a new government might say, all of a sudden, no more United States ships in the Suez Canal.

"In the short term, the biggest global economic worry remains oil prices. Egypt itself isn't a big energy producer. But significant shipments of oil and petroleum products pass through Egypt each day on their way from the Mideast to European and U.S. markets." WSJ 01/30

There is absolutely no basis for this. Therefore, the fabrication is deliberate and ill intended.

Then the Journal trots out an expert who draws a conclusion based on the unproven hypothetical. Once again, there is no basis for saying that there would be any shipping disruptions. Why would a new Egyptian government give up that income or pick a fight with a White House with a record of military aggression?

The media is like a dog on point. They just can't give up the notion that we're headed for an oil shock.

"Apart from Egypt's role as an energy transporter, fear that unrest could spread to bigger oil producers could exacerbate worries." WSJ 01/30

Where is the information that would justify this fear?

Where is the explanation that accounts for this remarkable mass uprising?

Where are the questions about the three decades of neglect by several U.S. administrations and the requests by presidents Bush and perhaps Obama to carry out "renditions" [torture] in behalf of the United States.

When you support a tyrant who oppresses his/her people, you risk the antipathy of the people when they gain control.

Apparently, our ruling class hasn't paid any attention to recent history. For years, successive US regimes supported dictatorial rule in South America. The dictators are gone, left leaning governments are in place, and no one is lining up to punish the United States.

The real concern about change in Egypt is all about control. The elite of the US and Europe may encounter a leader who isn't in their pocket, doesn't care whether or not he or she is invited to Davos, and actually seeks the benefit of the vast majority of citizens rather than the crony capitalist network also known as the global economy.

This article may be reproduced in part or entirely with attribution of authorship and a link to this article.

Groton - Connecticut National Guard Detachment 2, Company I, 185th Aviation Regiment of Groton has mobilized and will deploy to the Sinai Peninsula, Egypt, to support the Multinational Force and Observers.

The unit left Connecticut Jan. 15 for Fort Benning, Ga., for further training and validation. The unit operates C-23C Sherpa aircraft and has deployed three times in the last seven years in support of the conflicts in Iraq and Afghanistan.

The unit will provide an on-demand aviation asset to the Multinational Force and Observers commander to support its mission of supervising the security provisions of the Egypt/ Israel Peace Treaty.

That said, there is also another fictional piece trying to claim U.S. manufacturing is #1.

I saw the tear gas canisters said made in America on them. Apparently, so did the egyptian planes.

Is this another police action in the making?

1,000 overseas military bases and climbing we are becoming a stealth version of the Roman Empire living off the labor of the rest of the world with our military maintaining the Pax Romana.

We can win any battle but the long wars and occupations are tough.

Now that we're half way through the second act of this and one group of crooks is gone, we'll have to see how the organizers handle their cause. I think that they understand both subtitles and determination. If the Army is smart, they'll enhance their investments (and there are quite a few) but turning Egypt into a modern nation. What a gift to everyone.

It's been throughout history that when income inequality reaches a certain point as well as events like Italy being wiped out by their trade deficit (5%) in the 1930's, Weimer Republic hyperinflation, WWI reparations, "Let them Eat Cake" (French, Russia) and corruption, revolutions are sure to follow and many of them are frying pan to fire.

I saw they have some of the most corrupt, income inequality with massive poverty and the young, no opportunity.

"Notwithstanding the prohibition against torture and the clear duty to prosecute torturers imposed by international and Egyptian law,12 Egyptian security forces in 1991 continued to torture detainees with apparent impunity. In an October 1991 report, AI found the existence of "widespread [and unabated] torture of political detainees in Egypt."13 EOHR reported in August 1991 that there was a "total absence of safeguards for the prisoner while in detention in public prisons." For example, in the case of those accused of the October 1990 assassination of Parliament Speaker Dr. Rifaat al-Mahgoub, EOHR found that Egyptian laws prohibiting security-force access to prisoners without an official permit from the public prosecutor's office were openly flouted." Human Rights Watch World Report 1992 http://tinyurl.com/5v6g28c

The income disparity, the obvious anti-life policies (longevity low, infant mortality high), and violence against the people coalesced to bring people to acts of desperation and rage.

But how about those Wall Streeters and their privatization and open market economy. The Egyptians got stuck with everything but Tom Friedman as gifts from their biggest donor.

Wipro and Infosys, notorious Indian body shops are pulling their people out of Eygpt.

So, the fact that these Indian body shops offering I.T. are even in Eygpt tells me these companies are beyond wage arbitrage, they literally are making sure they only employ Indians for jobs in a host of countries.

People in Eygpt are not uneducated, so, I suspect there are plenty of people there who could handle I.T., and probably software development.

I just couldn't believe that considering how Eygptians need jobs and the population is high, wages are very low.

If anyone is unfamiliar, these two companies bring over foreign guest workers, get billion dollar contracts that result in massive layoffs of Americans and don't save that much money either.

On the other hand, the more cynical scenario would see, in time, yet another despot replace Mubarak. Let's hope not but given 30+ years of rigged elections and pseudo-democracy one is not left with a huge amount of optimism.

The people in Tahrir Square are all alone without anything but their experience and wits. Not one G-20 leader supports their goals. And, of course, there's the Egyptian grandees who have much to lose. I share you lack of optimism. On the other hand, if they hang in there and Mubarak goes, that will be a victory equal to any revolution in the last 100 years. One can hope. Like the Turkish saying goes, 'If you sleep on the floor, you can't fall out of bed.' It's not very comfortable, though.

Notice how more and more people are having to resort to watching Al Jazeera to get any real news.

That's how bad our cable news and reporters have become.

Our talking heads are all about "inside baseball." Maybe that's why they peak at 2-3 million viewers.