A quarterly GDP of 2.01%, unrounded, is not robust growth. Consumer spending did pick up from Q2, but exports declined. Government spending alone attributed for 0.71 percentage points of Q3's 2.01% GDP. The drought negatively impacted economic growth as farm inventories reduced GDP by –0.42 percentage points.

Imports and exports, M & X are greatly impacted by real values and adjustments for prices from overseas and they are usually revised. The below graph shows real imports vs. exports in billions. The break down of the GDP percentage change to point contributions gives a clear picture on how much the trade deficit stunts U.S. economic growth. We see a slowing of global trade generally with exports' decline negatively impacting GDP by -0.23 percentage points while the slow down in imports only giving a 0.04 percentage point boost to Q3 GDP. 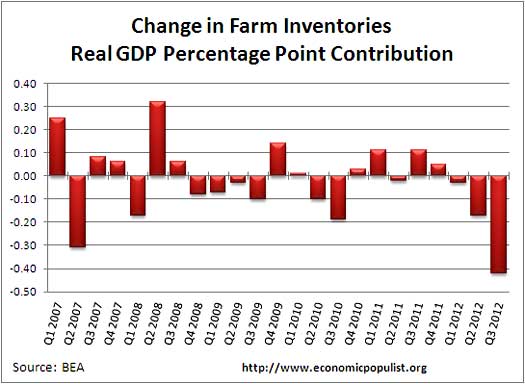 Residential fixed investment was +0.33 percentage point contribution to Q3 GDP. One can see the housing bubble collapse in the below graph and also how there is no meteoric recovery for Q3, in spite of all of the housing data hype. What's happening is there is activity in residential real estate but by volume will not return to the housing bubble years. Motor Vehicles as a whole gave a –0.47 percentage point GDP contribution. Computer final sales, was 0.17 by percentage points. These are different from personal consumption, or C sub-components, such as auto & parts. These are overall separate indices to show how much they added to GDP overall. Motor vehicles, computers are bought as investment, as fleets, in bulk, by the government, as well as part of consumer spending, government spending and so on. Structures as a whole, added 0.14 percentage points to GDP, in spite of fixed investment structure subtracting from economic growth.

The price index for gross domestic purchases, was 1.5% for Q3, whereas Q2 was 0.7%. In other words, there was way more inflation than last quarter, corresponding to the rise in oil prices for Q3. Core price index, or prices excluding food and energy products, was 1.3%. Q1's core price index was 1.4%. Below are real final sales of domestic product, or GDP - inventories change. This gives a better feel for real demand in the economy. This is because while private inventories represent economic activity, the stuff is sitting on the shelf, it's not demanded or sold. Real final sales increased 2.1% for Q3, whereas real final sales for Q2 were 1.7%. Here is our overview for Q2 GDP and other reports on gross domestic product can be found here.

The formula gets a lot of ink but is of dubious value,G is so tightly intertwined with I and C that distinctions are meaningless. It is one large entity losing some trillions of dollars a year. Five hundred billion in cash and a few trillion in non-renewable resources. To assume less G will be less GDP needs actual data. It is easy to imagine the reverse. To assume more GDP is a good idea is also an empirical question.

and if one bothered to read the BEA handbook on NIPA one would see that G is very different from C and I, which are private sector. G is spending and investment by the government but excludes transfer payments, such as Medicare and Medicare, social security.