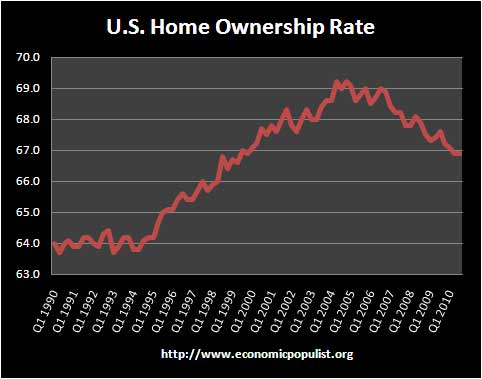 No surprise Seniors have the highest home ownership rate.

For the third quarter 2010, the homeownership rates were highest for those householders ages 65 years and over (80.6 percent) and lowest for the under 35 years of age group (39.2 percent). The rates for householders 35 to 44 and from 45 to 54 were lower than their respective rates a year ago, while those householders less than 35 years old, 55 to 64, and those 65 years and over showed no significant change from their corresponding rates in the third quarter 2009.

While Calculated Risk has some more analysis on home ownership and vacancy rates, a couple of points not addressed are:

So, where did the people go who used to be in these housing units? From the population growth of the U.S., I don't think they died or expatriated.

It seems I'm not alone in wondering where did all the people go? Mortgage Daily, with more graphs and details, also pointed out what homelessness does to a society:

An adult without a permanent address has difficulty finding employment, maintaining a healthful lifestyle, or a medical regime. A family without stable and affordable housing cannot access many social and health related services, or provide adequate clothing and nutrition; its children become transient students, frequently with social and psychological problems. Imagine how those individual small human problems impact the schools which must educate the transient and troubled students, a health system that must cope with crisis rather than prevention, an increase the burden on law enforcement and the social network.

Imagine if the government simply let the homelessness stay in these houses, rent free? The responsibilities are property upkeep, moving the law, keeping it clean. 18,700,000 housing units could help a hell of a lot of desperate people right now.

Maybe the government could even start a rent to own program, so people could pay back a housing loan after some of these people get back on their feet?

Even Bloomberg states the obvious, home ownership has fallen because banks are foreclosing on people.

Lenders are repossessing properties as borrowers fall behind in mortgage payments after the worst housing crash since the Great Depression. Banks seized a record 288,345 homes in the third quarter, up 22 percent from a year earlier, according to an Oct. 14 report from RealtyTrac Inc. in Irvine, California.

What caused the increase in home ownership in the first place? Lax lending standards is part of the blame, but could it also be, at least in the 90's, that more people had jobs and assumed their income would rise?

Below is the graph from the Census Bureau. It shows the yearly change regionally for a little more detail on home ownership. 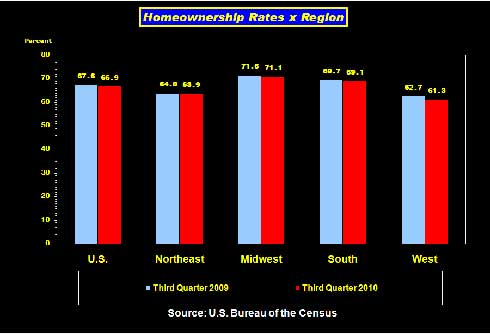