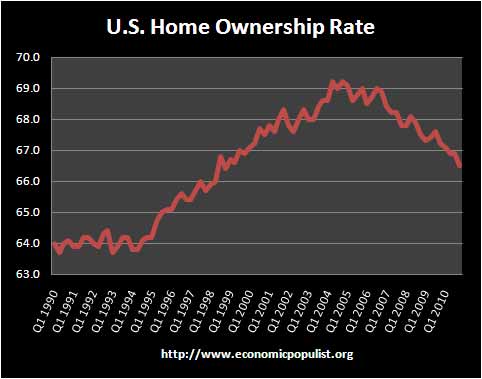 The homeowner vacancy rate is the proportion of the homeowner inventory which is vacant for sale. While the report says:

Below notice how the homeowner vacancy rate increased for Q4 2010. 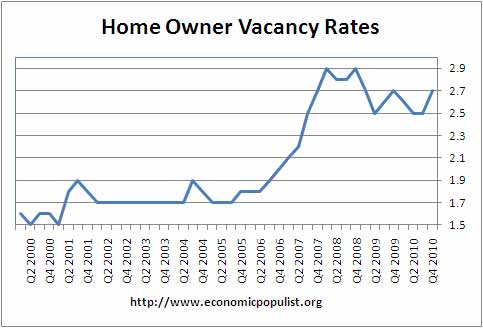 Calculated Risk did an detailed analysis to guesstimate the excess housing inventory by the above statistics.

A normal rate for recent years appears to be about 1.7%.

This leaves the homeowner vacancy rate about 1.0% above normal. This data is not perfect, but based on the approximately 75 million homeowner occupied homes, we can estimate that there are close to 750 thousand excess vacant homes.

Since the rental vacancy rate is also abnormally high, Calculated Risk estimates there are about 600 additional units that add to total housing inventory excess of 1.35 million.

The held off of the market, other category is 3.6 million units, which is often seen as additional shadow inventory. There were 18,821,000 vacant units and of those officially for sale, there were 2,052,000 million.

HAMP, the "help" for homeowners program is such a joke, I don't feel like writing up the latest statistics from the Treasury.

Bloomberg does an ok overview with the headline, 1 in 5 mortgages default again after modification.

The Special Inspector General for TARP took the program over the coals, as you pointed out when his most recent report came out. The report and the findings were barely covered by the media. This presentation shows why such coverage was important and why the citizen portion of the bailouts has been such a failure.

Yet Geithner is off at Davos lecturing the worlds plutocracy, those afraid to meet anywhere other than an isolated Swiss village.

We need total regime change. Our leaders are miserable failures, not fit to claim that they represent anyone other than those who pay most handsomely for their services.

...that this site features an ad by Goldline, Glenn Beck's gravy train, to help shore up its bottom line? When it comes to websites and blogs, even so-called progressive sites like this, there are no ideological lines. We rail about Goldline and how they're a bunch of swindlers yet happily acxept their advertising money. No, no hypocrisy here, folks.

please do. While this site is popular, the server costs alone are not covered and we assuredly could use better advertisers than what pops up in adsense.