The Federal Reserve's Industrial Production & Capacity Utilization report, G.17, shows 1.1% increase in industrial production for April 2012. Manufacturing increased 0.6%, mining 1.6% and utilities increased their production a whopping 4.5% in a course of a month. The April jump in utilities shows just how unusual the January to March warm weather was. Within manufacturing, motor vehicles & parts alone also increased an astounding 3.9% for April. March industrial production was revised down, from no change to -0.6% and February was revised to now show a monthly increase of +0.4%. This report is also known as output for factories and mines. This is the largest monthly percentage industrial production increase since December 2010. 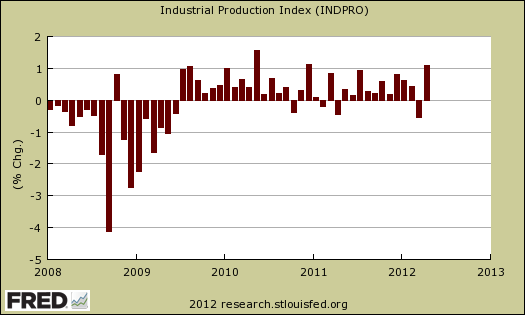 The production of business equipment moved up 1.5 percent in April after having risen 0.2 percent in March. The more rapid gain in April reflected improvement for all of the major business equipment categories, particularly transit equipment, which posted an increase of more than 3 percent for the third month this year.

The index for defense and space equipment rose 0.3 percent in April and was up 5.0 percent over the past 12 months.

The production of construction supplies was unchanged in April after falling 1.6 percent in March; it remained more than 20 percent below its level preceding the recession. The index for business supplies advanced 1.4 percent for its largest increase in more than 2 years. Capacity growth is not to be confused what what is being utilized, instead this is the actual growth or potential to product. Capacity growth overall has increased only 1.0 percentage points from April 2011. Below is the capacity growth increase from a year ago.

According to the report, manufacturing uses 77% of capacity, utilities 10.3% and mining 12.8% in 2011 (rounded) to give a ratio of manufacturing vs. mining and utilities. If you are baffled by what crude, finished mean from the G.17 report, read these stages of production definitions. Stages of production have implications for exports, further industrial production for finishing and since only finished goods are for final sale, what kind of output one will see for the month.