JOLTS stands for Job Openings and Labor Turnover Survey. The October 2011 statistics show there were 4.25 official unemployed people hunting for a job to every position available*. There were 3,267,000 job openings for October 2011, a decrease of -3.38%, from the previous month of 3,377,000. For the 39th month, JOLTS again reflects a dismal jobs market and this is with job openings increasing 35% from their June 2009 trough. Below is the graph of number of official unemployed, 13.897 million, per job opening for October 2011. 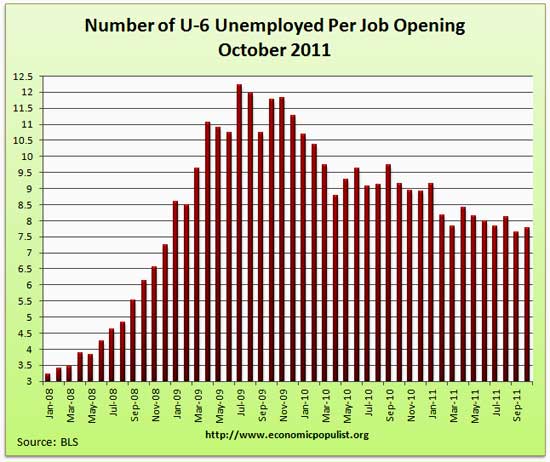 Below are total job separations, 3,932,000, a -2.96% decrease from last month. The term separation means you're out of a job through a firing, layoff, quitting or retirement. The report has a breakdown of separations by occupation category and decreases were across the board. For October, of total separations, the quits were 49% whereas layoffs and fires were 41%, where the percent difference between the two shrank 2% from last month, completely from less firings.

Below are quits minus discharges and layoffs. When quits comes close to firings that means people have little choice in employment. You want to see choice, or quits, rise and be much higher than firings. The below graph shows people still do not have that many options when it comes to a job, although the situation improved this month. The ratio is nowhere near the 2009 mass firings and layoffs. The BLS was kind enough to make a credible Beveridge Curve graph, reprinted below. The Beveridge curve shows the official unemployment rate vs. the job openings rate, over time. If you see a bunch of data points to the far right, that's bad, it means there is long term unemployment and not enough jobs. Look at how we're stuck to the right. October 2011 moved vertical down, left. That means there are less vacancies, but the unemployment rate decreased slightly. A right up move in the Beveridge curve can indicate a skills mismatch. Note the ratio decreased, but from other reports, odds are more people just dropped out of the count instead of a better match up. The green, representing the 2009 time period, shows how fast we went to the right and the purple, which is 2010, 2011, means we are stuck there. All of that purple line is the last two years and shows the U.S. worker is stuck and stuffed, in no man's land for jobs. Look at how awesome 2000 was for landing a job. 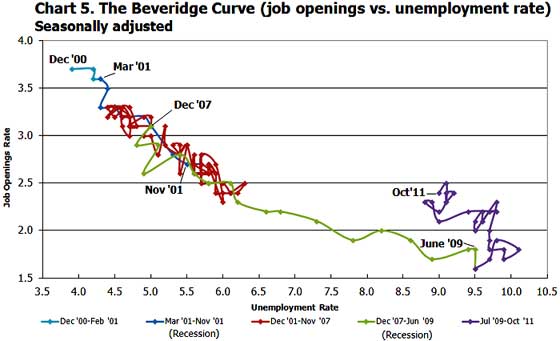 Additionally, JOLTS includes part-time jobs and does not make a distinction between part-time, full-time openings. A job opening reported to the survey could literally be take out the trash twice a week and be counted. This is a shame, it would be nice to know a little more about the quality of these new opportunities.

For the JOLTS report, the BLS creates some fairly useful graphs, some of which were reprinted here, and they have oodles of additional information in their databases, broken down by occupational area. The Saint Louis Federal Reserve also had loads of graphing tools for JOLTS. Below is a reprint of the BLS graph showing the percent change in job openings from the July 2009, there were no jobs trough. Just unbelievable how construction jobs dried up during that time. The 467% increase in construction job openings first looks great, but more it should show you just how bad it got in 2009. Same with manufacturing's 138% increase. 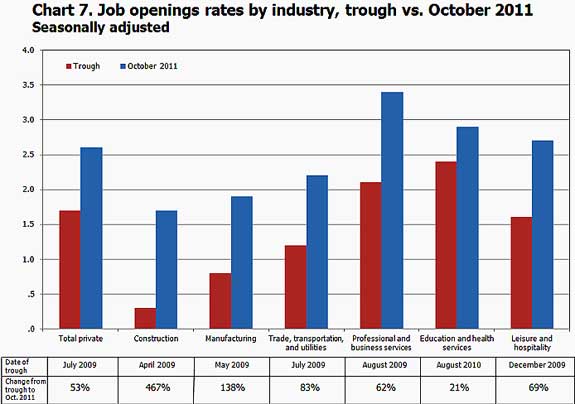 Professional and technical services is notorious to import workers on foreign guest worker Visas, displacing Americans. Employers and headhunters, contract houses, put out fictional job openings continually, demanding perfect skill matches to the point no one on the globe has that experience, all to justify why they offshore outsource jobs. The rise in these job categories ignore the number going to these imported workers, displacing Americans. Additionally, assume job openings are inflated in STEM, which is part of professional and business services.

Please comment or ask me to crank another number. Myself, beyond the fact job openings decreased in October, not a good sign, thought anyone who believes the new low labor participation rates are normal or magically all young people entered college due to not eating lead paint anymore are smoking crack. I'm sorry and hopefully I can do a break down there and find show, no, they did not win the lottery or go to college.

...I am linking you with a shout-out Thursday.

I'm glad you're reviewing these for sometimes I wonder if the only ones reading them are search engine bots! ;) Seriously, our traffic is down and I'm not sure why. I think it's something with Google news changing their configuration. Still I see Google page ranks on our posts, many #1, most on the 1st page and it makes me know I have a great responsibility to give accurate information as a result.

To anyone else reading these overviews, if per chance there is a mistake, please let us know.