When President Obama proposed a special tax rate for U.S. manufacturing the pundits went wild and the press dutifully followed.

Cutting corporate tax rates and deleting loopholes is just what most economists prescribe for the tangled U.S. tax code.

So why isn't everyone cheering the plan President Barack Obama unveiled Tuesday to slash the top corporate tax rate and end breaks that let some companies pay little or nothing in taxes?

Economists note that Obama's plan would upturn the very playing field the administration says it wants to level. It would give manufacturers preferential treatment: Tax breaks would effectively cap their rate at 25 percent. Other companies would pay up to 28 percent.

Some say such varying rates can distort the economy by diverting investment into some industries and away from others that might pack a bigger economic punch.

"The administration is not making sense," says Martin Sullivan, contributing editor at publisher Tax Analysts. "The whole idea of corporate tax reform is to get rid of loopholes, and this plan is adding loopholes back in."

Folks, U.S. manufacturing has been in decline, with millions of jobs offshore outsourced. Who living in the Midwest doesn't know this? 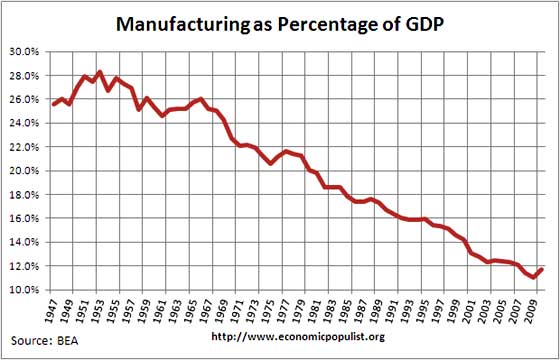 What's wrong with special treatment? Manufacturing creates good jobs. Shall we all be burger flippers or does everyone in America now have to come up with the next Facebook to be financially secure? Right now America is replacing middle class jobs with crappy ones.

Henry Farber, an economist at Princeton University in New Jersey, studied employment in the Great Recession, and found that job losers who found new positions earned on average 17.5% less in the new job.

While Robert Reich poo poos manufacturing, his reasoning is a little different, a lack of unions. Pushing American workers to slave wages, whether as burger flippers or as high skilled manufacturers, the end result is the same. 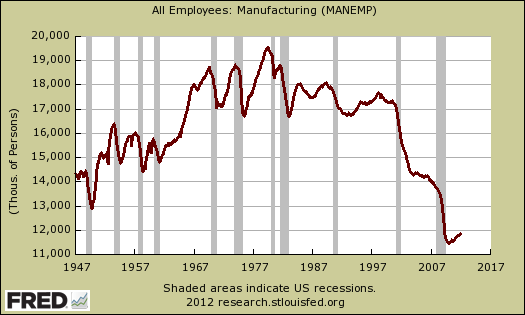 Even if we didn't have to compete with lower-wage workers overseas, we'd still have fewer factory jobs because the old assembly line has been replaced by numerically-controlled machine tools and robotics. Manufacturing is going high-tech.

Bringing back American manufacturing isn't the real challenge, anyway. It's creating good jobs for the majority of Americans who lack four-year college degrees.

Manufacturing used to supply lots of these kind of jobs, but that was only because factory workers were represented by unions powerful enough to get high wages.

That's no longer the case. Even the once-mighty United Auto Workers has been forced to accept pay packages for new hires at the Big Three that provide half what new hires got a decade ago. At $14 an hour, new auto workers earn about the same as most of America's service-sector workers.

GM just announced record profits but its new workers won't be getting much of a share.

In the 1950s, more than a third of American workers were represented by a union. Now, fewer than 7 percent of private-sector workers have a union behind them. If there's a single reason why the median wage has dropped dramatically for non-college workers over the past three and a half decades, it's the decline of unions.

While Robert Reich has a point, the reality is even if everyone in the United States was in a union, we would still be facing global labor arbitrage. Just ask Finland, as Nokia moves production to China.

So why is it Germany and Canada are doing so well in manufacturing? One word, Policy. The Brookings Institution has just written a new study , Why Does Manufacturing Matter? Which Manufacturing Matters?: A Policy Framework. Part of the study examines 1st world countries like Germany and Canada as a model. So surprise, surprise, policies can grow an industry, much to the consternation of those who don't believe in government.

Sturdy worker protections ensure that instead of solving problems through short-run cost-cutting, German employers and unions work together to adopt high-road solutions that strengthen firm competitiveness in the long term.

While President Obama's proposals are refreshing we actually need more incentives, long term national strategies. A critical agenda item must be putting U.S. workers first and disarm this agenda to treat Americans as disposable, as cannon fodder for a quarterly profit statement. Maybe we have so many poo pooing manufacturing because they have a vested interest to do so. After all, U.S. multinationals have always ridden high, including this recession. It's the American people who have suffered.