NAR tries to spin pending home sales' -5.5% annualized monthly decline. This is the largest monthly percentage drop in a year. 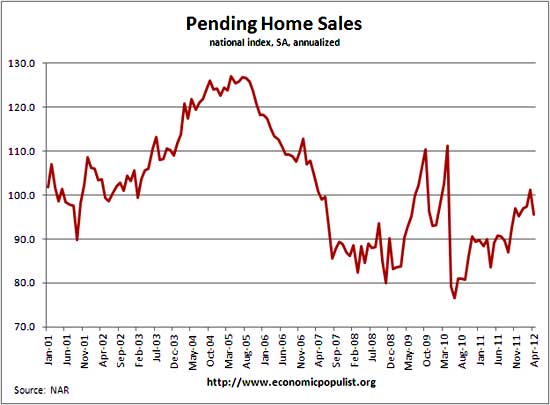 Pending home sales retrenched in April following three consecutive monthly gains, but are notably higher than a year ago, according to the National Association of Realtors®.

The Pending Home Sales Index,* a forward-looking indicator based on contract signings, declined 5.5 percent to 95.5 from a downwardly revised 101.1 in March but is 14.4 percent above April 2011 when it was 83.5.

Last month we saw the same thing, the housing bust is over and the market is recovering, but last month was based on the monthly increase.

The NAR Pending Home Sales Index is based on contract signings and indicates actual sales a couple of months later. Pending Home sales are not actual closings.

As we can see from the above historical graph, pending home sales have been higher, right in the middle of the housing bust, mainly due to the first time home buyer's tax credit. Ignoring that anomaly, we see pending homes sales more around 2002-2003 levels. Here is NAR's regional data breakdown:

Contracts maybe signed but as of late, many do not make it to final sale. From the existing home sales report, we have NAR now refusing to publish the percentage of contracts cancelled, claiming often another contract is offered after a cancellation. In other words, we don't know how many of these pending sales will actually go through. In January 2012 one third of contracts were cancelled.

This index is based on 20% of existing home sales. It helps to also know what the pending home sales index is normalized to, 2001. Think about the U.S. population growth since 2001.

We've seen this headline buzz before and NAR's housing forecast is so pipe dreamin', well, go to their website to read it. Literally they dismiss the CBO's recent warning, the United States will sink into recession. Meanwhile in reality land, an astounding number of homes are underwater.

While NAR continues to forever claim a recovery is around the corner, other analyists note mortgages are at record lows and that has failed to revive the housing market.

Bottom line the housing market is uneven, rolling around levels from a decade ago and anyone trying to claim the U.S. will return to 2006 is smokin' crack.