The National Association of Realtors Pending Home Sales declined by -1.8% in June 2015.  Pending home sales are still up 8.2% from a year ago and had previously increased for five months in a row.  This is the third highest amount of pending home sales for 2015 but sales have increased year over year for ten months now. 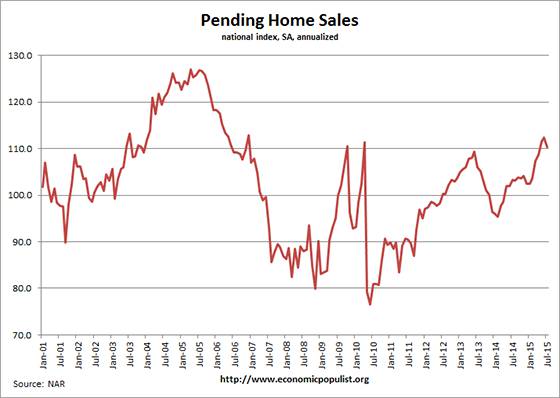 The above graph shows pending home sales have recovered to 2006 bubble year levels.  The NAR notes first time home buyers are really not the cause for the overall recovery but people who are no longer underwater in their mortgages finally and want to trade in and up are.  From the NAR:

Existing-home sales are up considerably compared to a year ago despite the share of first-time buyers only modestly improving. The reason is that the boost in sales is mostly coming from pent-up sellers realizing their equity gains from recent years.

Competition for existing houses on the market remained stiff last month, as low inventories in many markets reduced choices and pushed prices above some buyers' comfort level. The demand is there for more sales, but the determining factor will be whether or not some of these buyers decide to hold off even longer until supply improves and price growth slows.

The west coast has seen a massive run up in home prices that are completely out of whack with income levels in the areas.  The declines were in the Midwest and the South.  Below are the NAR regional pending home sales figures:

Probably the worst of this report is the prediction home prices will blow out at the bubble year gain levels.  This is while first time home buyers are squeezed out, with tight standards and 20% down payments required.

The national median existing-home price for all housing types in 2015 is expected to increase around 6.5 percent to $221,900, which would match the record high set in 2006. Total existing-home sales this year are forecast to increase 6.6 percent to around 5.27 million, about 25 percent below the prior peak set in 2005 (7.08 million).

May was a nine year pending home sales high and the NAR believes it is a matter of inventories causing June's decline, yet the NAR and their economists are always warm fuzzy pie in the sky in their analysis.  Others are pointing to housing data leveling off.

Competition for existing houses on the market remained stiff last month, as low inventories in many markets reduced choices and pushed prices above some buyers' comfort level,