February 2014 Retail Sales increased 0.3% for the month.  This is the first increase in three months.  January was revised all the way down to -0.6% and December's drop was -0.3%.  Retail sales have now increased just 1.5% from a year ago.  January's decline was due to a real nose dive in auto sales, down -2.3% for the month.  Online retailers continue their rise with a 6.3% increase from a year ago.   Retail sales are reported by dollars, not by volume with price changes removed.

Total retail sales are $427.2 billion for February.  Below are the retail sales categories monthly percentage changes.  These numbers are seasonally adjusted.  General Merchandise includes super centers, Costco and so on.  Health and personal care sales have increased 5.5% from a year ago, largely due to prescription drugs. 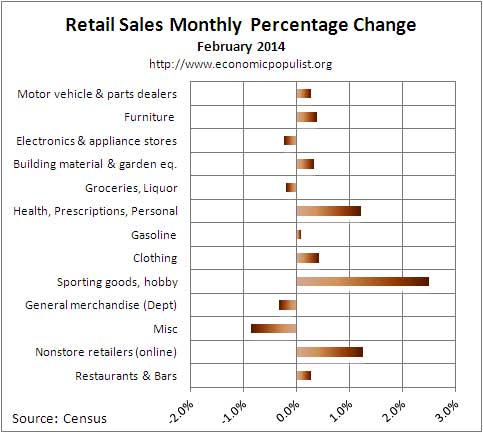 Below is a graph of just auto sales.  We see how the recession just decimated auto sales and also how autos have dropped off recently with a 2.2% increase for the year.  Budget cuts and government shutdown games can impact auto sales as governments use large fleets of autos and trucks.  Going for a test drive in a polar vortex probably also really hurt auto sales. Below are the retail sales categories by dollar amounts.   As we can see, autos rule when it comes to retail sales.  We also see online retailers are really making a dent in their importance to the economy. 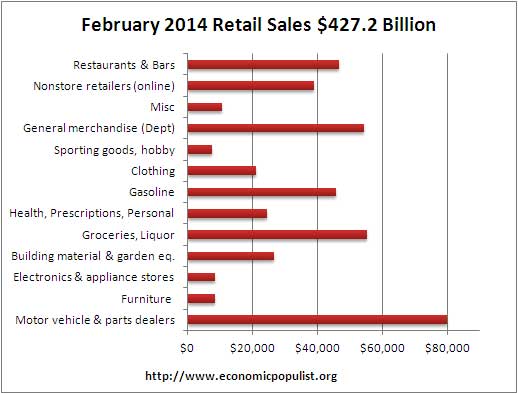 Graphed below are weekly regular gasoline prices, so one can see what happened to gas prices in February.  They were basically bouncing around, so actual gas volume use might have increased as sales grew by 1.6% for the month. The below pie chart breaks down the monthly seasonally adjusted retail sales by category as a percentage of total February sales by dollar amounts.  One can see how dependent monthly retail sales are on auto sales by this pie chart.  We also see non-traditional retailers making strong grounds on traditional general merchandise stores and almost equal to gasoline sales in terms of importance. 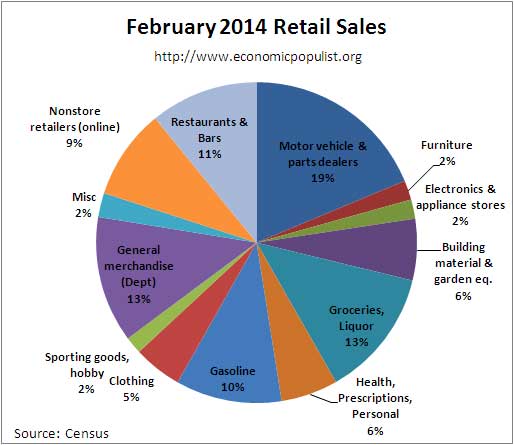 Retail sales correlates to personal consumption, which in turn is about 70% of GDP growth.  Yet GDP has inflation removed from it's numbers.  This is why Wall Street jumps on these retail sales figures.  Below is the graph of retail sales in real dollars, or adjusted for inflation, so one gets a sense of volume versus price increases.  Below is the annualized monthly percentage change in real retail sales, monthly, up to January 2014.  This is a crude estimate since CPI is used instead of individual category inflation indexes.  The below graph is quite a nasty foreboding of what consumer spending might shape up to be for Q1 2014.  Very ugly graph. most of last year, when retail sales were at least increasing monthly, we were seeing 20, 30 or 40 thousand retail jobs being added each month...now, with retail sales in the dumper, that employment has fallen for two months consecutively...there's a very good correlation between those store types where sales are falling, especially YoY. and those who've had the largest layoffs..

ie, specialty shops, such as sporting goods, book and music stores, with sales down 5.2% YoY, cut 8,600 jobs in the last payrolls report; department stores cut 6,600; and electronic and appliance stores, which have seen sales decline 2.4% from last year, lost another 12,000 jobs in February..

Amazon is the reason,they undercut local retail and now because these stores are closing, they are raising prices. Prime is now $99, which means you had better be ordering a hell of a lot of stuff to justify paying it.