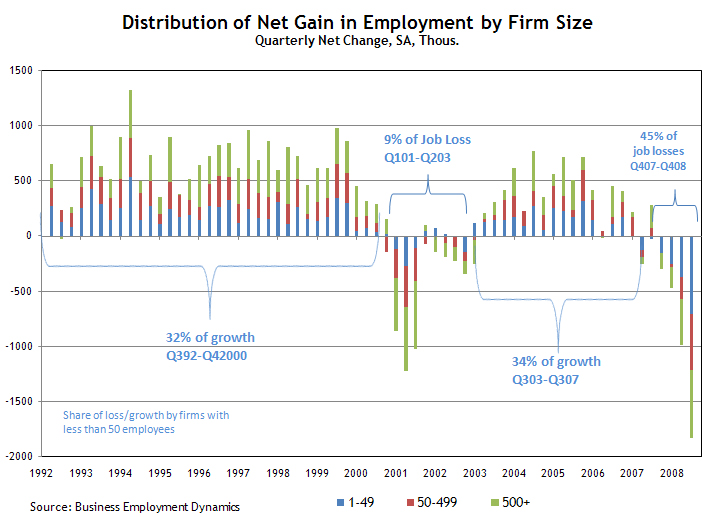 This table also shows small businesses with less than 500 employees are responsible for 65% of the job growth for the last 16 years.

Did you know small business generates most of the U.S. innovation, intellectual property and hires a good 40% of all technical workers? So, not only is small business the engine of job growth, it is also the jobs of the future manufacturing hub.

Current Small Business problems are outlined in this speech by the New York Fed bank President:

For small business borrowers, there are three problems.

First, the fundamentals of their businesses have often deteriorated because of the length and severity of the recession—making many less creditworthy.

Second, some sources of funding for small businesses—credit card borrowing and home equity loans—have dried up as banks have responded to rising credit losses in these areas by tightening credit standards.

Third, small businesses have few alternative sources of funds. They are too small to borrow in the capital markets and the Small Business Administration programs are not large enough to accommodate more than a small fraction of the demand from this sector.

(You might read the entire speech for Dudley mentions deflationary pressures, again due to the high unemployment rate, thus repressing wages, how the Stimulus is temporary and he mentions the risk of a double-dip recession).

To bring home this crisis, here is an Arkansas news article about one small business being denied a loan:

Chris Knodle approached a dozen local banks for a business startup loan earlier this year armed with a stellar credit score and a 35 percent down payment.

“No thanks,” loan officers responded.

Knodle eventually got the approval he needed from a larger regional bank, which allowed him to open a Golf USA franchise in Fayetteville in June.

“We ultimately decided to do the Small Business Administration loan, but we were hoping to avoid those hoops with a conventional commercial business loan,” Knodle said.

SBA loans carry a 90 percent government guarantee and are more expensive for the borrower, who pays a premium for that guarantee.

Knodle is not alone, according to Larry Brian, director for the Small Business Development and Technology Center at the University of Arkansas. He said it’s nearly impossible for borrowers to get a business startup loan in the current economic environment, despite recent government intervention.

Knodle said the 3 percent monthly premium was waived as part of the government’s recent intervention, but he still incurred $1,500 in closing fees.

So, a SBA loan is more expensive and on top of it, small business are being shut out of lending by conventional financial institutions.

A Coleman survey claims the small business loan default rate was 12% in 2008:

The Coleman Report, which provides lenders with small business data and SBA news, calculated the failure rate by dividing the number of loans liquidated or charged-off last year by the total number of loans made through the SBA's flagship lending programs.

Last year's failure rate is a sharp increase over past years. In 2004, the SBA loan failure rate was 2.4%, but it has increased each year since, rising to 8.4% in 2007, according to Coleman's calculations.

Typically half of all small businesses fail in the first 5 years. Yet in this recession, small business bankruptcy rates increased 81% from Jun 2008 to June 2009.

Forget manipulative tax credits on new hires (well, don't forget it, it's one minor good idea). Create a government sponsored venture capital team that literally listens to business plans, proof of concept demonstrations and helps small businesses grow. Fix the SBA. The SBA is obviously not doing that great of a job, with a 50% fail rate under normal economic conditions. It's also obvious the U.S. needs major job growth and business engine growth initiatives, since the America now needs an astounding 250,000 jobs per month for 5 years just just to get back to a 5% unemployment rate!

We need so much more to foster job creation, innovation and good old fashioned success as fast as possible. Just enabling more debt ain't gonna cut it on this one. If Soros can do it, start a venture capital fund with strict conditions, but also help and guidance, so can the U.S. government.

This is really bad news. VC funding drops to 2003 levels.

Remember, a lot of VCs were burned during the dot con era, so they pulled really back in 2001-2003 time frame.

This is why I think the U.S. government plain needs to get into the VC business.

The SBA is some bureaucratic nightmare beast, where one almost needs to specialize in the SBA to figure out how to get anywhere. Applying for government contracts...almost another area of specialization due to all of the bureaucracy. Who the hell has the time or ability to figure out this maze of "gotchas"?

They need to not only have some sort of WPA style program, they need to jump start job growth and the economy with new business ventures.

This has been true for some time, but basically investors currently seem to have "herd think" which is the only markets where one can make huge money is in emerging economies......they are not looking at the good ole U.S.A. as an "emerging economy" of the future. They should. The U.S. is just throwing away it's own talent, it's own citizens, it's own ingenuity, which needs some serious capital infusions as well as guidance and mentoring, resources.