Congressman Peter DeFazio smelled a rat and boy did he find one. A host of Oregon forest thinning and clearing jobs, created by the American Recovery Act and funded by taxpayer dollars, went to foreigners, brought over on H-2B guest worker visas, instead of unemployed Americans. DeFazio fought and obtained funding for those forest projects and jobs in the 2009 Stimulus bill. DeFazio assumed with so many unemployed and desperate U.S. Citizens in his state, of course those jobs would go to them. He was wrong. 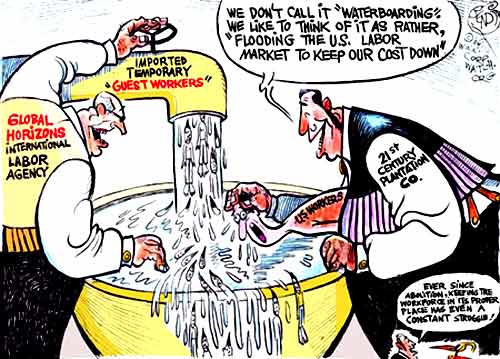 A local newspaper in Bend Oregon, actually did their job and started investigating how forest thinning work was going to foreigners instead of unemployed loggers in the area. Defazio read the newspaper.

In 2010, the Forest Service awarded Stimulus Recovery Act contracts to four employers totaling $7,140,782 for forestry work in Oregon. These four employers in turn hired 254 foreign guest workers. This is when unemployment in Oregon was hitting 15% in rural areas and loggers were hard hit.

Believe this or not, even with taxpayer dollars, supposedly to create jobs, employers are not required to recruit U.S. workers. That's right, you can be unemployed, pay taxes which in turn import foreign workers and deny Americans employment. Below is a local KATU news segment where one logger tells KATU the real unemployment rate in forestry work was over 40%.

The four contractors, using millions in taxpayer funded Stimulus money, literally discriminated against these Oregonians, simply because they were....Oregonians. From the DOL audit report requested by Congressman DeFazio:

Two workers who reported that the employer used discouraging language, such as references to age and the ability to speak another language, which are not valid conditions of employment.

The wages paid exactly are hard to tell from the report. Quoted prevailing wages are also misreported and abused. It appears these foreigner guest workers were paid $8.41 to primarily $9.57 an hour. GE Forestry, Medford Cutting Edge Forestry, Summitt Forestry, Inc. and Ponderosa Reforestations, Inc. even lied and claimed they had hired 29 U.S. workers which the audit showed didn't actually work for them. In other words, Americans hired: 0, foreign guest workers hired: 254.

An additional 29 workers were reported by two employers as hired on the recruitment reports; however, none actually went to work for the employer.

The H-2B Visa is supposedly for unskilled foreign guest workers when no American is available. Who here believes we have an unskilled worker shortage? Here's the number of new H-2B visas, just one type of many visas, approved in 2009:

Pretty much the only requirement for employers in order to import foreign labor is to claim they couldn't find a U.S. citizen worker. The audit report goes into great detail on how these four contractors clearly didn't look for Americans or advertise the jobs. When some Americans showed up anyway looking for work, these contractors outright rejected them with a slew of blow off games.

Peter DeFazio on the report:

The goal of the stimulus bill was to put Americans back to work, not foreign nationals. It is obscene that U.S. companies were rewarded for abusing our American workers and immigration laws to undercut competition and squeeze more profits out of contracts,” said DeFazio. “Oregonians have been logging for over a century, our workforce is one of the best in the world, and these contracts should have been awarded to companies that hire Oregon loggers. This report confirms that federal and state agencies failed to properly oversee the contracts and the companies investigated exploited federal loopholes to avoid hiring American workers. The Department of Labor must address the failings identified in the IG’s report.

We can only hope Congresman DeFazio requests more audits. He simply needs to run a few on I.T., STEM, Tech jobs via H-1B and L-1 Visas and he'll find the exact same thing, anyone but an American need apply. He'll find the same lies about a worker or talent shortage all the while millions of Americans are losing their homes, jobs, retirement, health care and even don't have enough to eat.

This is just the tip of the iceberg on employers displacing American workers with foreigners. Additionally this story only come out because Congressman DeFazio pursued it and a local newspaper bothered to do a little investigative journalism. If other Congressional representatives looked for similar labor arbitrage in their districts, jobs being handed out to foreigners on guest worker Visas instead of Americans, it wouldn't take them long to find the exact same thing.

In America it's become anyone but an American when it comes to employers' hiring and jobs.

Case in point, these four unscrupulous employers claimed U.S. Citizens just weren't interested in the jobs. It's an obvious lie.

Although 146 U.S. workers were contacted by the three employers regarding possible employment, none were hired. Instead, 254 foreign workers were brought into the country for these jobs.

Don't believe it still? Watch this law firm giving a seminar on how not to hire an American. Literally there are law firms raking in millions, all to make sure U.S. corporations don't have to hire U.S. citizens and can import foreigners instead. Believe me, discrimination against U.S. citizens isn't just happening in the deep woods of Oregon.

We've already reported on Stimulus money pouring out to China, esp. Green job contracts and we have a new one where over $500 million went to Finland (although that said, Finland's PPP is more in line with the U.S. so this might be something unique vs. arbitrage).

Still the point of Keynesian economics, stimulus is to use taxpayer funds, temporarily to jump start a domestic economy, not a global one, not a foreign one. You must keep the funds in the economy and most importantly hire citizens of that domestic economy you're trying to stimulate.

In other words, even infrastructure jobs, as much as that is sorely needed, is an investment, long term economic imperative for the U.S......

if they don't require only U.S. citizens are allowed to be hired for those jobs, the point is mute. It will be another financial money seize, flowing offshore.

I'll field the Finland thing. I think that probably enough money was given to build the cars, but not enough to resurrect America's entire industrial base which has been totally devastated by decades of shipping jobs overseas. So, Tesla Motors had to go to some country that hadn't entirely destroyed its industry to build them.

I read a quote from Bruce Springsteen the other day, which I'll paraphrase, "Hitler and Hirohito could only dream of doing what our big money men have done."

He's coming back and he wants to be a candidate in the Republican primary. He said that most of the others would never notice any difference between what he intends to say and the other candidates.

Glad to see the Teamsters picked up on this for I know, from years of research on guest worker Visas used to decimate the STEM occupations for U.S. citizens, this issue needs audits on every single Stimulus project and auditing generally.

We cannot even get the real numbers on foreign guest workers working in the U.S. It's notorious to use loopholes to not hire Americans at every turn.

The H-1B Visa is called the offshore outsourcing Visa because they use these to technology transfer projects out of the country, as well as train foreigners to U.S. citizen level of skills. Literally thousands of Americans have had to train their foreign replacements before being fired.

You can also bet this issue will not been seen on MSNBC, or CNN. It's a media black out on any sort of U.S. citizen labor displacement.

I had NPR News in the background today. They have generally been just horrible on issues about U.S. citizen labor displacement, but today they interviewed a man who told about how he has been working in construction since the 1960s and whenever illegal workers have come into the picture, his wages have been cut and all the rest (periods of unemployment, etc.). Seems to me that this was a first for NPR News, which did recently cover a town in the Carolinas severely impacted when textile mills (not textiles) were exported. In that story, they decidedly backtracked to present the fiction that there are plenty of other jobs out there, and "it's just a matter of retraining."

As to like STEM jobs, no, NPR hasn't even approached that yet.

This story was on FOX news today. The guest worker scams are being exposed, finally.