The House Just passed the Stimulus and the majority of the debate was on tax cuts.

Who here knows that continual mantra of tax cuts being sung in D.C. is just the echos of a dead religion? Yet debate it back and forth they go.

How about not give any tax cuts in the Stimulus and move onto the real portions of the package which will have the best effect?

Citizens for Tax Justice have just released an analysis on the GOP tax cuts versus the current tax cuts in the Stimulus bill.

On Friday, January 23, House Republican Leader John Boehner (OH) and Republican Whip Eric Cantor (VA) presented their "Economic Recovery Plan" to President Obama. The Republican plan is based on income tax cuts for relatively well-off families and business tax cuts. As a brand new report from Citizens for Tax Justice explains, it is unlikely to provide the needed boost to consumption that economists believe can come from either direct government spending or putting money in the hands of working class people who are likely to spend it quickly.

While I have been leary of any job creation for any tax cuts and indeed CTJ confirms:

As Moody’s economist Mark Zandi illustrated in a report released just last week, not one of the tax cuts that have been discussed recently would stimulate the economy as much as any one of the possible spending increases that are commonly discussed. For example, every dollar in federal revenue lost because of a corporate tax cut would increase the GDP by only 30 cents. But a dollar spent on increased unemployment compensation would increase GDP by $1.63.

Tax cuts generally provide less of an economic boost, particularly if they are temporary; on the other hand they can be implemented quickly. A particular plus for individual tax cuts included in the House stimulus plan such as the payroll tax and earned income tax credits is that they are targeted to benefit lower- and middle-income households that are more likely to spend the extra cash quickly. Investment and job tax benefits for businesses are less economically effective, but are not very costly and more widely distribute the benefits of the stimulus plan.

Even further he gives a ratio number to which parts of the bill give the most bang for the buck: 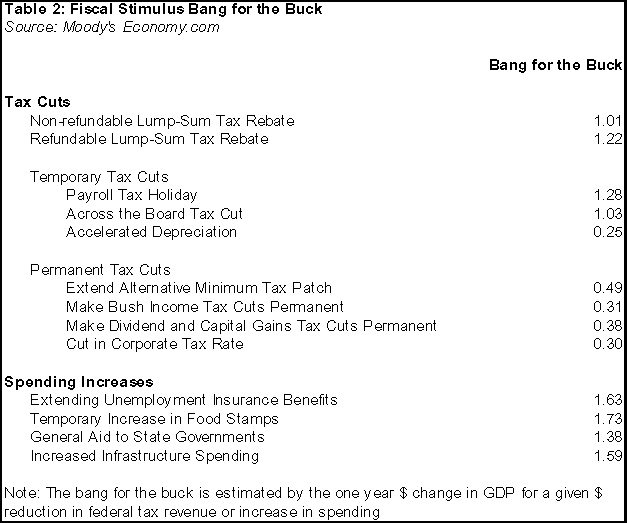 So, if we are supporting policies and legislation that will get the job done, which is job creation, it seems to me which should ignore these various religious mantras entirely and do what the consensus analysis implies.

Of the tax cuts Zendi notes the ones to the poor are best because they need the money and thus will spend it stimulating the economy from a consumer view.

Here is Zendi's overall estimate of the unemployment rate with and without Stimulus. 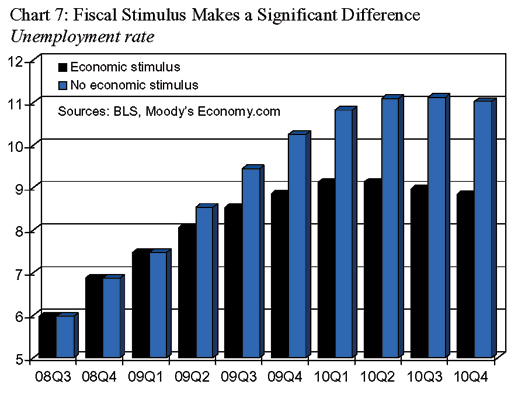 I suggest swimming in a non-debate on tax cuts as if any of them are going to do what needs to happen to our economy is the dead pool.

and I have not seen it before. Thanks!

I wish tax cuts were a dead religion. But the Republicans just won't give it up. God, I'm hoping a dead elephant falls on top of Grover Norquist some day soon.

Sometimes in dense analysis I borrow the graphs for a picture is worth a thousand words.

But still, I'm just not going to be a believer (except on known infrastructure jobs which a report today came out about our crumbling bridges) on which component is going to generate x jobs....until I see a directly analysis on each component, generating y U.S. worker jobs.

I especially do not trust Democrats (or Republicans) to not give offshore outsourcers billions. They already have and they will not even breath on how offshore outsourcing of jobs is one of the reasons we are in this mess.

... most of the rail programs that are getting additional funding under the House bill ...

... of course, "Buy American" provisions on rail funding is especially safe since everyone does it, so there's nobody to raise a complaint in the WTO ... all the Europeans have national content requirements, Japan has, and China quite famously has generated complaints from doing the same thing.

what's in, what's out. One thing to note is when the Senate, House pass different versions. There are these nondemocratic creatures called conferees, just a couple of Senators, House Reps. who "resolve the differences" between the two bill versions.

This is a major place where amendments, provisions get ripped out after passing both houses and/or corporate lobbyists get in something they want after the bills have been passed.

The Buy America provisions, as noted by many of our middle column blogs, is strongly under attack by corporate lobbyists.

And still there is no provision anywhere to ensure these jobs go to Americans. Nothing. I envision the offshore outsourcing companies simply lining up at the White House door on that one as a result.

I have a feeling that all of the stimulus for laid off Information Technology American workers will just go to IBM, Accenture, TCS, Wipro - who in turn will hire a bunch of h1bs.
Does anybody know if there is an amendment to only hire american workers in this free money give away?

and I agree with you so all I can say is call your Senators at this point and demand they add those conditions. US workers preferred (U.S. citizens perms) or something to this effort or....pass S.1035 as a stand alone, intact, as is.
That is a bill from last Congress to reform the H-1B and L-1 Visa programs.

Even get a seat at the table at this point. They had six years of unfettered control of all three branches of government, the Treasury and the FED.

I think they have done enough damage with their constant drum beating.

It has always been about class warfare.

... without any of the radical right wingers in the House ... that's what all of the real manuvering is about. The talks with House Republicans is pure puppet theatre.

Your argument against tax cuts is, of course, fundamentally flawed.

Compare the supposed $1.63 value for unemployment benefits vs. the $.30 benefit for a cut in the corporate tax rate. Assuming these figures are correct - by no means certain given Zandi's political bias - the unemployment benefits consist of a 13 week extension to already existing benefits. That's only 1 quarter, so the real value of that extension is just a one time boost of $.40, as opposed to an annual $.30 benefit which would go on for years, adding up to far more in total.

is you assume that people even have a job or that a corporate tax rate cut would have them create a job in the United States versus offshore.

Notice the blizzard of layoffs or did one of those falling workers hit you in the head and make you temporarily blind to the wage/unemployment reality in the United States?