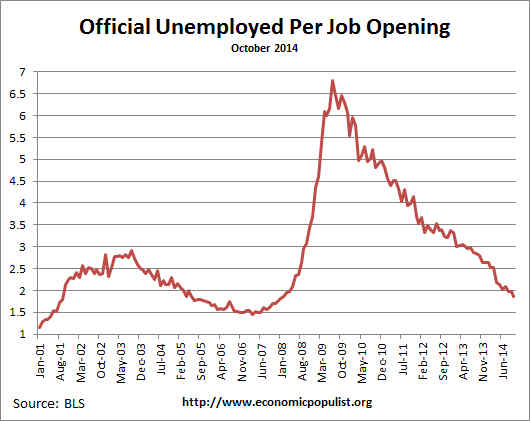 If one takes the U-6 broader measure of unemployment that includes people who are forced into part-time work and the marginally attached, the ratio is 3.8 people needing a job to each actual job opening.  In December 2007 this ratio was 3.2. 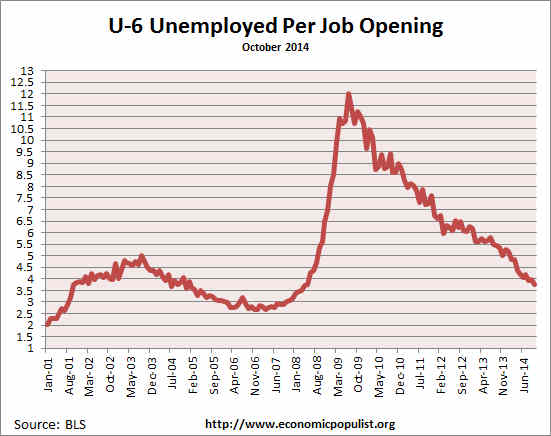 Since the July 2009 trough, actual hires per month have only increased 32.8%,  Total hires are still below pre-recession levels, but not by much, about 2.4%.  In the private sector hires are about 2.1% below their pre-recession levels.  Bear in mind on levels the working population has increased significantly since 2007, so the lack of a hiring boom shows sluggish work opportunities.  Additionally, Businesses can say there are job openings, but if they do not hire an American and fill it, that doesn't help the labor situation.  In truth, businesses are trying to squeeze workers and import cheap labor instead of hiring Americans at middle class wages and benefits.  Below is the graph of actual hires, currently 5,055,000. Graphed below are total job separations, currently at 4,824 million.  The term separation means you're out of a job through a firing, layoff, quitting or retirement and is also called turnover. Layoffs and firings were 1.7 million, which is a return to July levels.  Below is a graph of just layoffs and firings.  One can see from labor flows businesses are not trashing their workforce like they did in past years.  Labor flows means the way people are hired, stay at a job, quit, get fired, get another job and so on.  It is the overall flow of the labor market for as people are get jobs, they also lose them. Graphed below are people who quit their jobs minus those who were fired and laid off.  The lower the bar on the below graph, the worse labor conditions are.   Workers quit their current jobs often to obtain better ones.  People feeling free enough to leave their current positions is considered a positive labor market sign.  Quits were 2.72 million.  Quit statistics are still below pre-recession levels of 2.9 million, but have increased 65.5% since their September 2009 trough. Over the 12 months ending in October 2014, hires totaled 57.2 million and separations totaled 54.5 million, yielding a net employment gain of 2.6 million. These figures include workers who may have been hired and separated more than once during the year.

The bottom line is the situation is improving, yet not as strongly as some would believe or headlines would say.  The hidden element in these statistics is how long it has taken to return to 2007 levels.  The number of people needing work has increased due to population growth during this time and thus one needs many more jobs to accommodate the new potential workers.  It is soon to be 2015, that's going on eight years of employment malaise.

On Tuesday, the U.S. Supreme Court came down unanimously against a group of temporary workers in Amazon warehouses. The workers were required to undergo mandatory, unpaid theft screenings once their shifts ended, and their case (Integrity Staffing Solutions v. Busk) focused on whether they should be compensated for that time.

Addressing the workers' arguments, the court's opinion, delivered by conservative Justice Clarence Thomas, included this curious line: "These arguments are properly presented to the employer at the bargaining table … not to a court in an FLSA claim."

It's not clear whether the irony was intended. Amazon's U.S. warehouses, of course, are entirely non-union. Workers, therefore, have no bargaining table at which to sit, a fact noted Tuesday by the National Employment Law Project, an advocacy group for low-wage workers.

From the Economic Policy Institute, regarding the new JOLTS report and saying only 2 were unemployed for every job opening:

"9.0 million unemployed workers understates how many job openings will be needed when a robust jobs recovery finally begins, due to the existence of 5.8 million potential workers who are currently not in the labor market, but who would be if job opportunities were strong. Many of these “missing workers” will go back to looking for a job when the economy really picks up, so job openings will be needed for them, too ... When a job opening goes unfilled when the labor market is weak, as it is today, companies may very well be holding out for an overly-qualified candidate at a cheap price."

Since Great Recession "officially" ended, we've had 11 million more "not in the labor force".
http://bud-meyers.blogspot.com/2014/08/since-recession-ended-11-million-...

From the BLS: Number of persons “not in the labor force” but who currently want a job --- 6.2 million (up from 5.4 million a year ago)
http://www.bls.gov/news.release/empsit.t16.htm

It is fall below and this is the first time. Will add to article. I calculate these figures from the data, this article is correct unless i made a calculation error, which I did not.

Also, on EP, the number who want a job is already in an article, no reason to link to the raw source instead of our article with the information further calculated and graphed.

You must have Javascript enabled to use this form.
The DOW was at 17,986 on Dec.  5 --- The DOW closed today at 17,575 --- A difference of 411 points over the past 5 days. (It’s down 225 just today)
OPEC slashed its estimate of 2015 crude oil demand ... Oil prices continued to hover around five-year lows after U.S. crude dipped to less than $63 a barrel on Monday for the first time since July 2009 [In 2011 oil was over $120 a barrel]
Neil Shearing, chief emerging markets economist for Capital Economics, says: “Commodity exporters have been struggling to cope with a downturn in global commodity demand for some time, but the latest price falls have made their underperformance compared with net commodity importers even more stark."
Gas Buddy shows an average gallon of gasoline at $2.67 (Remember when the GOP blamed Obama for high gas prices?)
(* I'm guessing that, the forecast for a lack of demand for oil also means a forecast for lack of consumer demand for goods and services, hence, the downturn in the stock market. Your thoughts?)
You must have Javascript enabled to use this form.

You wish you could know about the quality of the jobs coming through. Look at nominal average hourly wage growth. It's still way below pre-recession trends. The labour market cannot be tight until nominal wages are being bid up, and bid up for some time.