How much are you paying to fuel Wall Street oil speculators? A new, very timely St. Louis Federal Reserve research paper, Speculation in the Oil Market finds 15% of oil price increases are due to speculation and is the second most powerful mover of prices beyond actual physical demand. Demand itself accounts for 40% of the total oil price increase. Increasing the supply of oil was not the top driver of price decreases according to researchers. Oil production not correlated to price decreases is backed up by an Associated Press analysis.

The past decade has seen a surge in the financialization of commodities—that is, the creation and trading of financial instruments indexed to commodity prices. According to estimates (Masters, 2008), assets allocated to commodity index trading rose from $13 billion in 2004 to $260 billion in March 2008. Many policymakers and economists have observed that this rapid and unprecedented growth in commodity index trading coincided with a boom in commodity prices; some have extended that observation into a conclusion that speculation by financial traders—and not supply and demand—drove the recent bubble in commodities. 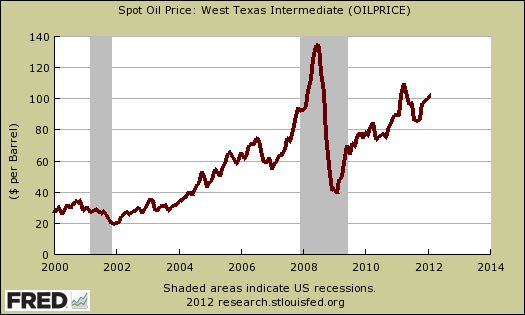 While some are dismissing speculation as the result of economists Juvenal and Petrella's work, think about it for a second. Fifteen percent of $100 dollars a barrel oil is $15 dollars.

Taking a low correlation of Brent crude, a dollar increase per barrel is roughly equivalent to a 0.33¢ increase in the price of gas, or alternatively a $33/barrel price increase is correlated, roughly to a $1 per gallon gas increase. Looking at 15% of $123 oil, we have a $18.5 speculator surcharge per barrel. Roughly 50-60¢ was added to the cost of each gallon of gasoline just due to speculation. That's significant! 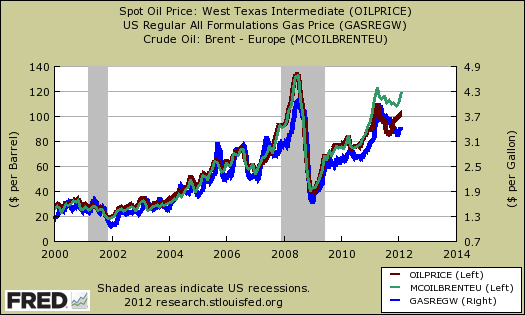 The Brent crude oil price, which is the European oil benchmark and the West Texas Intermediate, or U.S. oil price, have diverged recently, but both over the long term are highly correlated to gas prices (the blue line, scale at the right above).

There are actually many factors affecting gas prices, beyond the price of crude oil. James Hamilton has another great post explaining the differences across the States. James Hamilton also points to the futility of releasing the strategic oil reserve.

I see no evidence that last year's SPR release accomplished anything, and would not expect the outcome of another release this year to be very different.

Considering demand is the primary driver of gas prices, the fact gas demand has decreased implies a 15% speculator surcharge on a gallon of gas might be too low estimate.

Yet in spite of these statistics, many note the CFTC won't and can't stop speculation until the end of the year. A group of Senators have introduced a bill in the Senate, all crafted to stop oil speculation right now:

With all of the blame game goin' on, oil price spikes are correlated to recessions, so why play around and allow this key critical commodity to become so volatile? Even using the St. Louis Fed's much lower percentage estimate of oil speculation, it still significantly raises gas prices. As it is, the few players in oil speculation are going to court to stop CFTC regulations. Wouldn't it be better to simply remove speculation from the energy demand and supply equation?

Chinese demand, Greek drama, OPEC, Iran, weather reports and so on, are not responsible for high oil and gasoline prices, which are causing the recession and could lead to a depression. The oil price is dictated by the fraudulent "round-trip" trades of the "dark pool" trading in the IntercontinentalExchange (ICE) in Atlanta. The international Big Oil/big banking cabal, or an international gang of criminals, owns ICE. ICE operates outside of US law, considers itself to be above the law amd can commit fraud and law enforcement cannot do anything. The Commodity Futures Trading Commission has no jurisdiction over ICE, influenced by Big Oil. ICE's energy traders and speculators can ratchet-up the oil price anytime they feel like it, or their own profits and on the behalf of Big Oil, using "round-trip" trades. Google the "$2.5 Trillion Oil Scam - slideshare." "Paper oil" and the crude oil futures markets have to be done away. Cash at the wellhead. Over 75% of crude oil futures trading takes place in the ICE.The NYMEX is a decoy market. ICE Futures Europe is a susidiary of ICE. ICE is a super Enron. The "Enroning" of California was a test-market for ICE. Oil is too critical a resource to be controlled and manipulated by greedy traders, greedy refiners, greedy speculators and greedy corporations. Cash on the barrelhead. To obtain a fair oil price, Senator Sanders and the Occupiers have to investigate ICE and seize immediately the trading records of ICE, before they are destroyed and end the specter of ICE and end this crime against humanity.

This statistical view probably understates the importance of the speculator-driven changes. All human perception, including perception of numbers, is based on rate of change. When a number is constant we cease noticing it; the faster and sharper the change, the more we pay attention. The fastest changes are caused by speculation, so those are the ones that matter most in terms of public opinion or politics.

For this piece, hopefully it's realized I "eyeballed" it in the above 50-60¢, I didn't run any regression analysis or come up with a specific correlation formula.