One interesting statement from the minutes is the implication somehow there is bias in the BLS employment statistics, or front loaded monthly jobs growth:

While recent employment data had been encouraging, a number of members perceived a nonnegligible risk that improvements in employment could diminish as the year progressed, as had occurred in 2010 and 2011

No, the FOMC is not implying the BLS is lying, more they are looking at seasonal adjustments and other algorithms affected by weather as well as the dramatic cliff dive plunge of 2008-2009. The below graph illustrates what the FOMC is talking about. Below is the monthly change in nonfarm payrolls. We see stronger growth in the first part of the year and much less growth towards the end. Surprising the FOMC would mention this. 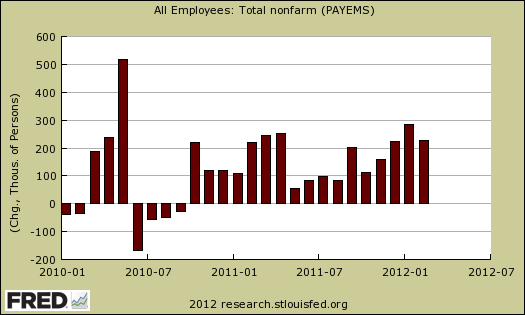 Additionally the Fed also implied something funky not to quite be believed on employment data from this statement:

The decline in the unemployment rate over the past year was larger than what seemed consistent with the modest reported rate of real GDP growth.

We'll see this week when the March unemployment figures are released and be sure to look at adjustments.

Oh yeah, yes, the Fed said zero effective interest rates all the way 'til 2014. Your savings account is simply a parking lot and will remain so for some time.

Astounding how Wall Street wants their fix. Was it hedge fund herion or market morphine the Dallas Fed Pres. called it?

QE3 is misguided and wrong. World-wide, banks need to increase their Primary Capital under the Basel Agreement(s). Their are a number of choices that range from new issues to the out of the box stuff. My idea is to have central banks buy new issues. This way you get higher equity percentages so banks can lend more with less risk. Central Banks are mercantile entities whose shares are owned by member banks. To the extent they have equity and treasuries, all of them can by member bank stocks.

If you go the QE3 route, you get higher debt-to-equity, which is self-defeating, less systemically stable and increases the general level of paranoia about the banks. When you issue new equity, you have higher equity to debt and more funds to lend. The trade-off is that new issues dilute Primary Earnings per Share. A relatively small price to stay in business.

Of course, you lean on the banks to start making loans of all kinds. The historical model for this is Teddy Roosevelt in the 1907 Panic. TR leaned on Rockefeller, Carnegie, JP Morgan and Mellon to invest and pull America from the Crisis.

Thanks to brleed for pointing to 1907 panic and T. Roosevelt!

Debt-to-equity, Basel Agreement(s) and proposal or approach to increasing primary capital -- all interesting and relevant. (Problem is, of course, that good ideas and rational thinking don't get much of a listen -- in MSM or in Congress or anywhere else.)

The hits just keep on coming. ZeroHedge has an interesting post on why operation twist will not be extended. There simply are not enough long term Treasuries to buy, about a 2-3 month supply.

Anyone else notice that Ben's speech on unemployment as well as the FOMC got it right on predicting a payrolls jobs curious and unusual event for January and February now that March payrolls have come out?

While we can argue over Fed's actions and slam monetary policy, at least in speeches we are seeing way more accurate and realistic economic metrics, predictions as of late.

IMHO, the FOMC is split. No consensus. There is no consensus among the four public members, and no consensus among the five members from the Regional Banks. And, in an election year, does anyone really think that FOMC will take some action by a close vote? I doubt that any Regional Bank member would consider casting a decisive vote with the Chairman for anything. And, if the Regional Bank members should or could act together in defiance of the Chair, that would be tantamount to those members taking the blame for whatever disastrous economic events and conditions develop between now and the election. The best strategy is to hope for the best ... and then, with luck, take credit for the relatively benign outcome, based on that you did nothing.

Consider this -- as members of the FOMC surely do -- the authority of the Fed has never, for at least two-thirds of a century, been called into question as it is today ... not that there's anything that the FOMC really can do to improve things.

Why is so little attention given to the situation that there are three vacancies for public members (to be filled by nomination and approval of the Senate). And why is there no investigation in the media, or even in academia, as to the causes of that situation? -- considering the blocking of nominations in the Senate and harassment of eminently suitable nominees (and even potential nominees) by MSM, such that nominees and even potential nominees drop out from the process? The United States Congress should investigate .. itself! MSM should investigate ... itself! Or, as currently in the UK, they could at least investigate each other.

Some voting members rotate out but basically two dissents out of the 10 is not a big deal, 3 seems to shake the ire of Wall Street and make them think something is going in another direction.

That said, we wrote here multiple articles trying to say this claim QE3 was bought to happen, which I believe GS analysts and a host of others were claiming it would, was wrong. I couldn't resist an "I told ya so" on it. It's like they believe this is still world of Greenspan, speaking in cryptic code, but Bernanke & Co. speak more like typical Academics, although still in that dense triple word to say one thing FOMC/Federal Reserve speak. Still to me it was very clear QE3 was not going to happen.

I confess to the ultimate no-no here at EP. I had my numbers off, and they are very simple numbers!

Bernanke does run the Fed staff and so he deserves some credit for good research and numbers coming from the staff.

BTW: Jeffrey Lacker, President of the Federal Reserve of Richmond, was the lone dissenting vote at the meeting. It appears that Lacker is an inflation hawk, favoring higher overnight rate. (At least that's what it looks like to me.)

Mr. Lacker dissented because he did not agree that economic conditions were likely to warrant exceptionally low levels of the federal funds rate at least through late 2014. In his view, with inflation close to the Committee's objective of 2 percent, the economy expanding at a moderate pace, and downside risks somewhat diminished, the federal funds rate will most likely need to rise considerably sooner to prevent the emergence of inflationary pressures.

There are 12 FOMC members, voting members:

The Federal Open Market Committee consists of twelve voting members: the seven members of the Board of Governors and five of the twelve Federal Reserve Bank presidents. The president of the Federal Reserve Bank of New York serves on a continuous basis; the presidents of the other Reserve Banks serve one-year terms on a rotating basis beginning on January 1 of each year. The rotating seats are filled from the following four groups of Banks, one Bank president from each group: Boston, Philadelphia, and Richmond; Cleveland and Chicago; Atlanta, St. Louis, and Dallas; and Minneapolis, Kansas City, and San Francisco.

But confusing as hell is why there are two still vacant seats on the board of governors is our never ending crappy Senate refusing to confirm nominees. Supposedly two more went up or something.

So, their crazy voting/structure becomes even more confusing with the missing board of governors members. They new nominees were voted out of Senate committee to confirm, but the full Senate chamber has to confirm them and there is more doubt, esp. because Obama nominated a G.W. Bush administration official as one of the new nominees. Shelby placed a hold on previous Obama nominee, Diamond, and they have been playing games with board of governor confirmations since 2006, so it makes tabulating out these votes a really headache. ;)