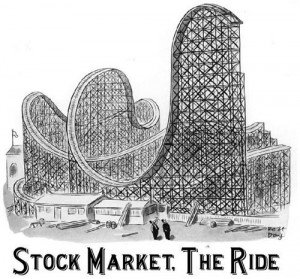 The markets are in a state of crisis. The US sovereign credit rating has been downgraded by S&P. Overall, developed market economies are demonstrating an inability to create jobs. Greece is about to default on their sovereign debt which will lead to contagion through the financial system in Europe. French and other European financials will be downgraded this week and markets are in a period of exceptional volatility and uncertainty. How does one invest in the crisis that everyone sees coming?

I am continuing to hold a constructive view with respect to investing and taking risk. In order to be rationally bullish, one must have some view with regard to the amount that will be lost if a crisis gets out of control. Knowing what you can lose ahead of time, while an imprecise science, is crucial for markets which are crisis-fearing and abnormally volatile. It is tough to invest confidently in an environment where there are both known unknowns, and unknown unknnowns. Yet these are the situations where prices are sufficiently depressed as they reflect the increased uncertainty and correspondingly offer the greatest prospective expected returns (as painful as the recent investing period has been). The flip-side of the above statement is true in reverse when market participants are too bullish and risk premiums don’t adequately reflect what could go wrong. Investors focused on one to two year type returns (which are the vast majority) need to incorporate a view of the return the market is offering to compensate for risk. I have come to the conclusion that even if we do end up in another global recession, the US economy and the earnings outlook will be much brighter relative to 2008 which therefore provides some opportunity to invest at depressed levels now (I consider S&P sub-1,150 as meaningfully depressed).

While the present lackluster recovery has been disappointing, there are also positives which stem from it as well. When the entire market sees a recession and a bear market coming you can bet that there is a pretty good chance it is “in the price”. Moreover, I would take this a step further and point out that the current state of low confidence and bleak future outlook is also “in the economy” as well. Here are some characteristics of the corporate sector in the US:

While the above set of collective behaviors creates obstacles for robust growth it also creates a buffer which will ward off sharply negative growth as well. The somewhat “de-risked” US corporate sector almost never gets mentioned in the financial media as a positive, with only the darker “new normal” type slow growth side highlighted. If companies are running efficiently, productivity stretched, and over-investment avoided, this results in the economy as a whole being stronger. Or put differently, the economy as a whole isn’t over-earning in front of an expected crisis/recession to the same extent it would be if events were unexpected (financial crisis of 2008).

We are in a rare environment where the US corporate sector is generating free cash flow (operating cash flow less CAPEX) in excess of reported net income. Free cash flows have run ahead of net income for 3 straight years. I decided to review the past 5-years of free cash flow and net income data for all 500 companies in the S&P 500.   S&P 500 Free Cash Flow and Net Income Data Looking at the results in aggregate is fascinating:

My methodology has some imperfections. I am using the S&P 500 constituents of today (not the same index from 5-years ago) and pulling the net income and free cash flow data for all 500 companies and analyzing this data in total. My analysis is being driven by the largest companies in the market (or the companies with the most cash flows and earnings) rather than by an index using market capitalization based weights. The purpose of my analysis though is to make a general point which is that cash flows have been much stronger than earnings based on the corporate sector being much more cautious than they have been in past recovery cycles. We actually started to see this behavior somewhat in 2003-2004 with continual dismay on the jobs and demand front. It took double digit house price gains to really stir corporate sector animal spirits. It is also important to note that you can’t have it both ways, and that the cash flow support to the market will lessen if the environment improves to the extent that there really is strong growth. Right now there isn’t much visibility for this type of environment. Slow growth environments unfortunately have slow growth but if they aren’t a shocking outcome, they also produce strong cash flows because businesses are hesitant to invest for the future.

The degree of S&P 500 cash flow generation has led to the strongest cash flow support to the S&P 500 in decades. Furthermore, the cash flows will be relatively sustainable, even in a recession, because the slowdown is not as unanticipated as it was last time. So the 64M dollar question – what is the right free cash flow yield for the market? There are a lot of S&P 500 stocks which are household names which have free cash flow yields in the range of 5-10% today. This level of cash generation increases the importance of valuing capital allocation when analyzing companies. Without interjecting any artificial precision, I believe a primary reason the market seems to continue to bounce when it gets in the vicinity of 1,100, no matter how bad the headlines, is that cash flow support starts to get excessively high.

I’ll end this lengthy note will an intuitive way to think about where the market may bottom even if we do go into a global recession in 2012. The market bottomed in 2008-09 at approximately 800. It got to 666 but there were only 27 trading days in the depths of the crisis where the market closed below 800. The average of these 27 days was an S&P level of 749. So depending upon how similar one thinks we can get to the environment of 2008-09 use somewhere in between 749-800 as the approximate market bottom. Since this time, the S&P 500 has earned 3-years of net income, most of which has accrued to corporate equity. S&P earnings were approximately $61 in 2009, $84 in 2010, and will be $102 in 2011. This totals to 247 S&P points. Of course we should deduct the dividend payouts of $23, $24, $26 respectively. This leads to an earnings based retained value creation of 174 S&P points. I believe that for a slow growth environment, cash flows are actually the right valuation metric to focus on and over the 3-years cash flows have been 1.58x greater than earnings. This would account for 275 retained S&P points. So from a base level of 748-800 we need to add somewhere between 174-275 to discern a market bottom equivalent for today. Given that 2008-2009 was the worst economic environment since the Great Depression I would argue that searching for a market equivalent to this period is actually too bearish.

The conclusion I draw is that around 1,000 for the S&P 500 there should be rather solid valuation based support even if we go into a global recession. This framework is why I am constructive on the current pullback. The environment is one where the market upside over the next 18 months may be over 3x greater than the downside.

Originally brilliant work. Thanks a bunch !