The House Agriculture Committee's farm bill would have denied food stamp benefits to as many as 5.1 million Americans, or more than 10 percent of the Supplemental Nutrition Assistance Program's enrollment, according to a new analysis by the Pew Charitable Trusts and the Robert Wood Johnson Foundation.

The estimate, based on an exhaustive analysis of how new asset tests (such as having $2,000 or more in cash, or by owning a second car, or by receiving assistance through the Low Income Home Energy Assistance Program) could disqualify applicants, reveals a deeper impact than the one last estimated by the Congressional Budget Office, which had said the House bill would cut fewer than 2 million from benefits.

Also according to the report:

Lately there have been claims from some in the press and Congress that SNAP (the food stamp program) is ripe with fraud and abuse. This is simply false. The economic realities of the new America are the reason food stamp usage has risen so dramatically.

"These are the poorest of the poor," said Kevin Concannon, under secretary for food, nutrition and consumer services at the Agriculture Department. "In many cases, these are people who are working who just can’t make ends meet."

Currently, the House version of a farm bill includes ZERO for food stamps (the first time since 1973) --- meaning, 1 in 6 Americans could go hungry.

The 2009 Recovery Act's temporary boost to Supplemental Nutrition Assistance Program (SNAP) benefits is scheduled to end on November 1, 2013, resulting in a benefit cut for every SNAP household. If Congress does not enact legislation to remedy this problem soon, as President Obama and some members of Congress have proposed, states will need to begin planning for the benefit cuts.

Below is the typical cut and bear in mind these benefits are not enough to feed someone for a month, no matter how clever and budget conscious they are. 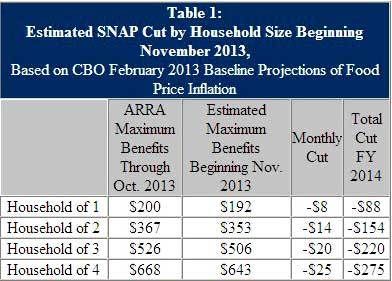 The states cuts are uneven and depending on which state one resides in they will suffer more.  For example, Washington D.C. gets a 23% cut while California is only 10% in benefits.  There is a table on how each state is impacted here.

Al Sharpton and his guests were on MSNBC today discussing the GOP's NEW plan to cut food stamps by $40 billion. They said that one Republican congressman, at a hearing on the poor this week, asked why the churches weren't doing more.

Al Sharpton said, "So the next time we should just ask the churches to bail out the banks?"

Needless to say Sharpton along with Fox, MSNBC, CNN are not credible sources at this point, especially the fictional ying, yang of Fox, MSNBC.

That said, this is outrageous that they are going to cut food stamps. First off to quality one needs to be dead, in a box, because no way is one making rent on the poverty rates. Then if one does get food stamps, it's a major coupon cutting, sale gutting, bulk getting art to eat well and make those funds stretch for a month. You have to know how to cook 2.

Glad you wrote about this!

Republicans say too many Americans receive food stamps, and that too many of them obtain benefits fraudulently when they could just get jobs instead. In fact, contrary to the idea that America's poor people are collectively gorging themselves on food stamps, they're actually leaving food on the table. In fiscal 2010 nearly 51 million Americans were poor enough to qualify but only 38 million received benefits. Older Americans are generally much less inclined to sign up for SNAP, with less than 40 percent of eligible seniors participating in 2010, according to the USDA.

What's the real agenda? Also, point out specifically who is claiming this, it is not "all" Republicans and no doubt there are a couple of Democrats out there making the same statements.

The "Paul Ryan camp", Cantor, is typically where the fictional math originates.

I'm sure Bill Clinton, a "Democrat," really gives a crap about the long-term unemployed, vets suffering from PTSD that can't find jobs, and "overqualified" Americans with PhDs that can engage in useless battles against labor arbitrage, right? I'm sure Chelsea and Hillary have struggled just like the rest of us 99.9% to find living wage job after living wage job, right? Or maybe like the Bushes, Gores, and every other member of the elite from both parties, the media, and other sectors, they jump from banking to government to the media to academia and wherever else their friends hook them up in return for "something in the future" or "in return for past deeds."

Come on, the guy signed NAFTA and repealed Glass-Steagall. But he's thinking about us while he's collecting hundreds of thousands of dollars at Goldman Sux for "speeches" just like Obama makes millions for books that someone or some groups can't buy quick enough? And he got mega-wealthy by being an "honest" politician like Truman that actually struggled until his death? Hmmm. My past comments show I have no love for either party.

They all appoint the same $ people to Treasury, the Fed, etc., etc. Same with Bush, same with everyone. They are puppets. D vs. R? Really? Come on, it's a charade. Go to opensecrets.org to see how much Goldman Sux, JP Morgan, etc., etc. all contribute to both parties, candidates on both sides of the aisle, Presidential candidates (e.g., Obama was a favorite of JP Morgan and Goldman a few years back, but he's just like us, really, I'm sure) and to the DOJ (to buy protection), Treasury, and on, and on, and on. D vs. R? Uhm, the $ party has its hands up both parties' asses and controls them both at our expense. Now, if only we could contribute gobs of cash to create laws, ensure the DOJ doesn't prosecute us, get a seat at the primary dealer table like Goldman Sux, etc. D vs. R? Murdoch, allegedly Mr. phone hacker and child murder investigation/police bribing media mogul still not prosecuted by the DOJ under a Democrat. And he's hardcore GOP with his Fox News. So if he's GOP, and the Dems don't go after him still with mounds of evidence regarding FCPA and RICO, what can we conclude? Who cares, it's all the same clown show and a debate in a vacuum.

Robert, this isn't against you (I know EP understands it's all BS), but in 2013 it's madness to still see the D vs. R, this guy or girl really really cares about me while he/she dines with lobbyists thinking still out there. It's all madness and propaganda. These elections wherever anyone is and for any/all offices are all becoming useless and laughable in the face of massive unemployment, Fukushima, media corruption, rampant lies about inflation, and still more trade talks while we suffer and the world burns.

A bunch of liberal Democrats signed a letter, written by a financial lobbyists to make sure people's retirement accounts are NOT SAFE, I kid you not.

Right, getting caught up on GOP vs. Dem. is clearly insane for the only thing that has the slightest prayer's chance of being passed through Congress is corporate written legislation, demanded by corporations and written by them.

It's so bad, I really wonder if legislators can even write legislation these days. There's a budget cut, fire the legislative staffers since our politicians will only pass bills handed to them by corporate lobbyists!