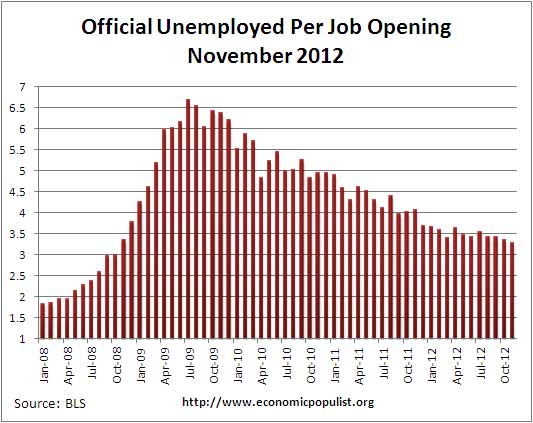 This report confirms November's drop in the unemployment rate was due to people no longer counted as part of the labor force. Simply put, people dropped out of the job market in November. 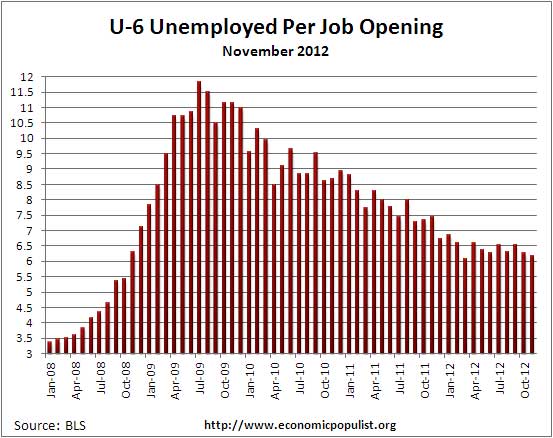 Graphed below are raw job openings. Job openings are still below the 4.7 to 4.3 million levels of 2007. This is five years later with an increased working age population. November hires were 4.319 million and no change from the previous month. Since the July 2009 trough, actual hires per month have only increased 17%. This is simply terrible and the most important indicator for employers are clearly refusing to increase hiring, across the board and thus not recover from our jobs crisis. Below are total job separations, 4.138 million, a level 1.3% increase from the previous month. The term separation means you're out of a job through a firing, layoff, quitting or retirement. Graphed below are openings separations and hires levels, so we can compare the types of labor flows. The flat line hires is the problem, beyond not enough job openings for the unemployed. There is simply not enough hiring going on to get people back to work.

Our monotone JOLTS report looks like employment musical chairs. We have an unchanged 1.9 million overall yearly net job gain even though time marches on to half a decade of labor malaise.

Over the 12 months ending in November 2012, hires totaled 51.7 million and separations totaled 49.9 million, yielding a net employment gain of 1.9 million. These figures include workers who may have been hired and separated more than once during the year.

Graphed below are people who quit their jobs minus those who were fired and laid off. The lower the bar on the below graph, the worse labor conditions are. The number of quits were 2.138 million for November, not much of an improvement from July 2009's 1.8 million quits. People quit their current jobs often to obtain better ones. People feeling free enough to leave their current position also hasn't changed much for the year. Additionally quit statistics are still way below pre-recession levels of 2.8 million. People are clearly not voluntarily leaving their jobs because the job market is so bad, even though the jobs slaughter of 2009 where people were laid off and fired in mass is over. The focus is most often on job openings, yet we know employers can post ads for jobs with absolutely no intension of hiring anyone. We like actual hired statistics and there we see a lack of growth. Graphed below are the major private sector industries and their hire levels. Think about a flat line monitor screen in a hospital showing someone has died. The below look familiar? 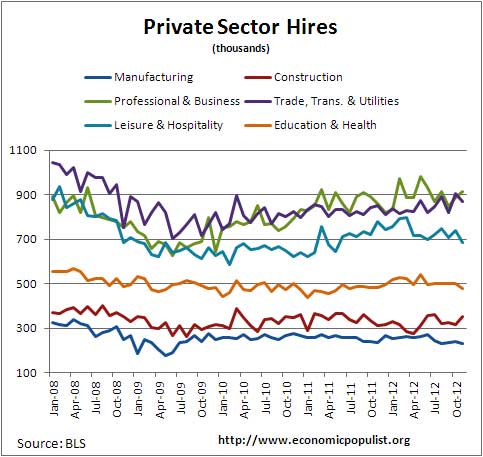 For the JOLTS report, the BLS creates some fairly useful graphs beyond the above and they have oodles of additional information in their databases, broken down by occupational area. That said, one doesn't know if the openings are quality jobs from the JOLTS statistics. The St. Louis Federal Reserve also had loads of graphing tools for JOLTS.

Here are past JOLTS overviews, unrevised.

And since there are already 3 or more people for every opening, should they just "try"?

That's about 26 million without a purpose other than to eat and go to the bathroom.

We can't have what we have now, much less anything new, no security as a nation if this continuing erosion of income and jobs continues.

Yet we are going further in the hole for every low-wage job that we are stuffing the recovery with, and no plan to do anything else.

We can't survive selling insurance and serving coffee to each other.

The middle of this crazy place is being eaten by the wealthy, those below are just kept alive to pay fees, most will never have an opportunity to get out of their hole.

And a relatively few wealthy tyrants, bankers, pimps, vermin - whatever one wishes to use - are taking, in large part, most of the income from everyone else and sticking it in their pocket.

A couple hundred million people today are doing their dead level best to feed most of their income to a few at the top, like the Kanamits on the old Twilight Zone Episode "To Serve Man".

So the job, perhaps, is to get folks to realize they are on the menu...and figuring out how we compete and own the assets in the world of machines might be key.

thank you for that