The Institute for Policy Studies has released a no holds barred report on CEO pay, culture.  Even the study title screams outrage, Executive Excess 2013: Bailed Out, Booted, and Busted.  Every year there is a list of the top 25 highest paid CEOs and over the past 20 years this list has included 500 executives.  Of those 500 who made the Wall Street Journal's top 25 highest paid Chief Executive Officer list, a whopping 38% were utter failures at their jobs.

Once again our daily barrage of economic injustice news is overwhelming.  From lobbyist lies to interest rate swap rigging to killing workers by the hundreds to our best and brightest working jobs flipping burgers, here are some quick economic news shorts that you don't want to miss.

Remember Say on Pay, the legislation that was supposed to curtail executive compensation, yet ended up being watered down to nothing? Now a token symbol? 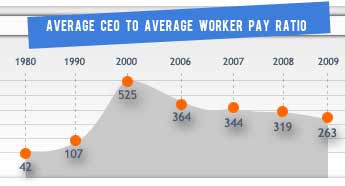 What ever happened to executive compensation reform? Like all great ideas, it died in Congressional committee, or watered down to meaningless if passed.

Where have we seen this before? The White House has a lot of talk. Then a pay czar is appointed. After some period, a damning report is issued. Then we have the public scolding, while legislation, policy and amendments are ignored and defeated, often by the very same administration.

Any action on the latest outrage du jour? Nah.

Such is the the Obama administration's pay czar's report. To be fair, the Pay Czar was given no power to actually get the ill gotten gains back. He also was limited to institutions who received TARP funds, not the real bail out going on at the Federal Reserve.

Get your Outrage on....according to the Wall Street Journal, pay at U.S. banks and securities companies increased 18% to a record $145 billion.

Earlier we mentioned the FDIC might take on executive pay.

Now the FDIC is asking for comments on this proposal.

The FDIC is seeking comment on how these types of risks should be accounted for when setting an institution’s risk-based assessment.

Employee compensation programs have been cited as a contributing factor in 35 percent of the reports prepared in 2009 investigating the causes of insured depository institution failures and the associated losses to the DIF.

Bloomberg reports the FDIC board vote.

The headline, FDIC eyes linking levies to bank pay, is yet another media sound byte which might be yet another PR stunt with no action.

US banks’ contributions to a multi-billion dollar fund that insures depositors’ savings could be linked to regulators’ assessment of bank pay plans, under preliminary discussions being held by top banking watchdogs.

So, there is no commitment or comment. At least the FDIC is considering such a move, while Congress does nothing.

This is almost silly but considering the move today by the Federal Reserve to limit executive pay, the below video, in the tacky genre of Lifestyles of the Rich and Famous might jar some reality on executive compensation.

The Fabulous Life of Wallstreet Brokers

It's not enough to run a financial institution into the ground, but when a nation tries to limit executive pay, bankers scurry like rats to the Cayman Islands:

A group of 45 bankers at Barclays yesterday bypassed potential curbs on pay and bonuses by jumping ship to set up a Cayman Islands company and manage $12.3 billion of Barclays’ most toxic debt. They will be paid at least $400 million over ten years (see Commentary, facing page).

In an exotic piece of financial engineering, the bank will lend $12.6 billion to Protium, a newly created Cayman Islands-registered hedge fund, to buy the toxic assets.