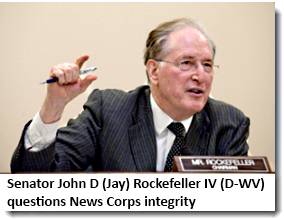 There are some crimes so universally offensive that even mentioning the suspected crime  has devastating effects.  Senator Jay Rockefeller (D-WV) raised just such a question yesterday.  In a brief press statement, the Senator said:

"The reported hacking by News Corporation newspapers against a range of individuals - including children - is offensive and a serious breach of journalistic ethics. This raises serious questions about whether the company has broken U.S. law, and I encourage the appropriate agencies to investigate to ensure that Americans have not had their privacy violated. I am concerned that the admitted phone hacking in London by the News Corp. may have extended to 9/11 victims or other Americans. If they did, the consequences will be severe." Senator John D. Rockefeller IV, July 12

Rupert Murdoch has always prided himself on his ability to make or break prime ministers, presidents, and princes, but in the end it was a lowly 13-year-old schoolgirl who has reached out from the grave to bring him down. Milly Dowler, a murdered British teenager, has extracted revenge against Rupert Murdoch for his many crimes, something the wealthy and the powerful have never been able to do.

Rupert Murdoch has been about wealth and power from his earliest days as a newspaper proprietor in Australia, but it is power that he lusts after. The power to shape and move public opinion is intoxicating for ambitious men like Murdoch, and when he first got into the business, merely owning a megaphone like the editorial page of a large national newspaper was enough to provide him the tools to guide the general public into a particular voting direction. Those days are long gone. Murdoch may own respectable newspapers like The Times of London, or The Wall Street Journal, but their editorial pages carry a fraction of the influence they had a quarter century ago. The reading audience – or more particularly the voting public – have long since moved on to television, and more recently cable television and the internet. To maintain his influence over the public, and to continue to intimidate, bribe, and possibly blackmail politicians, Rupert Murdoch has had to step up his game in a very nefarious way.