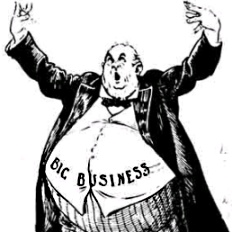 President Obama announced the new National Commission on Fiscal Responsibility and Reform on February 18 to address astronomical federal budget deficits. There has been considerable speculation that this commission will target current and future benefits for Social Security recipients to achieve its goals.

Why would this be the case? We need look no further than the treatment of major retirement funds over the past 20 years to get the answer. When the mob needed cash, it looted the Teamsters retirement fund. When large corporations or government entities get in trouble, they effectively borrow from their employee retirement funds by delaying required payments or otherwise gaming the programs. This provides a source of ready cash, a quick vehicle to cover management errors, or jack up their bonuses.

Think of the Social Security Trust Fund (trust fund) as the most lucrative retirement fund in the country, the ultimate pot of gold, and you'll immediately understand why it is that for decades, big business has plundered the trust fund. How does this happen?

The Biggest Retirement Fund Rip Off Ever

I wrote the story below in response to an outrageous trick Congress just tried to play on the public. As many of you know, the Senate passed 0/congress/bills/111/hr3808/text">HR 3808 The Interstate Recognition of Notarizations Act of 2010 unanimously on September 27. The bill was a carefully crafted, stealth "silver bullet" for the big banks to deal with their increasing legal problems with foreclosures. President Obama exercised a "pocket veto," which means he let it die after Congress adjourned. (Image)

While my story focused on the process and contempt shown to citizens by Congress in that process, I became aware of a much broader issue. We may well be on the verge of a real estate value meltdown as a result of very bad behavior, illegal in many cases, by the big banks combined with the legitimate push back of mortgage holders.

If banks can't foreclose and people can do a strategic default and walk away (0r live free in their residence), what will happen to real estate values?

If there are fundamental flaws in many, maybe most mortgage, flaws of a serious legal nature, what if a strategic default movement spreads beyond just those facing foreclosure? That's where Armageddon comes in

Where have we seen this before? The White House has a lot of talk. Then a pay czar is appointed. After some period, a damning report is issued. Then we have the public scolding, while legislation, policy and amendments are ignored and defeated, often by the very same administration.

Any action on the latest outrage du jour? Nah.

Such is the the Obama administration's pay czar's report. To be fair, the Pay Czar was given no power to actually get the ill gotten gains back. He also was limited to institutions who received TARP funds, not the real bail out going on at the Federal Reserve.

British Petroleum has operated as though it were a sovereign state since its inception. When they blew the well at their Macondo Prospect in the Gulf of Mexico, it never occurred to them that they would have to take orders from anybody. But that may change largely due to their inability to stop the flow of oil after nearly sixty days of gushing.

President Obama was clear in his speech last night. If any entity is going down as a result of the catastrophe, it will be BP. Today, Obama meets with BP's Chairman of the Board, Carl-Henric Svanberg, and the man he told the chairman to fire, Chief Executive Officer Tony Hayward.

Two sovereign states will collide. The outcome is a foregone conclusion. 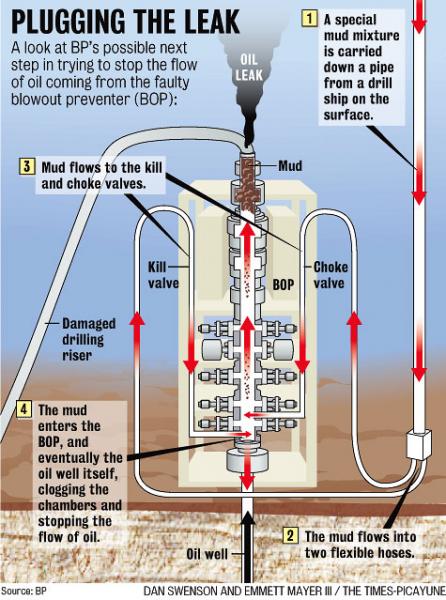 EP is deviating just a tad from economics and delving into the wild world of underwater engineering and environment disaster. This is what people want to talk about, this is what is on their minds.

We're in horror. We're helpless, dependent upon continual press releases and attempts while real solutions to stop the leak are dismissed.

The next attempt is a top kill, which is to push drilling mud and cement into the leak hole. This latest attempt is high risk and could make the leaks worse. Realize this is 5,000 feet deep in the water, with corresponding water pressure in addition to a massive gushing oil plume. The damaged blowout preventer is 5 stories high. Blasting fluids with high pressure, twice as dense as the surrounding water, has the potential to create another hole if the blowout preventer has weakness in the metal or other interactions. Ugh, my sympathies to the engineers. This has never been tried in water.

This analysis looks behind the scenes at how the ban on offshore drilling was lifted and what that had to do with the ultimate prize for big oil, the American Power Act.  It focuses on the current administration.  That in no way implies that the problem originated in January 2009.  The out sized and destructive influence of the oil monopoly has been with us for since the 1870's.

My, my, my. Today we have a preview of President Obama's State of the Union address. What is most offensive is the claim this administration is trying to help the middle class.

We are being bombarded with these misleading headlines:

Right. So, guess what policy initiatives are in the speech? Tax cuts.

A doubling of the child care tax credit for families earning under $85,000; a $1.6 billion increase in federal funding for child care programs and a program to cap student loan payments at 10 percent of income above "a basic living allowance."

His initiatives also include expanding tax credits to match retirement savings and increasing aid for families taking care of elderly relatives. That program would also require many employers to provide the option of a workplace-based retirement savings plan.

Are these people shitting me? I'm sorry but we have massive unemployment. What a sorry ass excuse to help for the middle class. U.S. workers need jobs and they need good jobs now. Who cares about tax cuts! When your income is zero, what do tax cuts matter?

What should be in Obama's State of the Union Address?

Obama revealed today his jobs plan and no surprise, it comes up short.

Brought to you by the Michael Jackson CNN Network - Breaking News!   The economic stimulus of Michael Jackson music sales has added 1% to the GDP (and boosted our ratings 4x).