ADP, a private organization, released their private payrolls jobs report. This month ADP is reporting a gain of 157,000 private sector jobs in June 2011. May was revised down to 36,000. Below are the reported private sector jobs from ADP. This report does not include government, or public jobs. 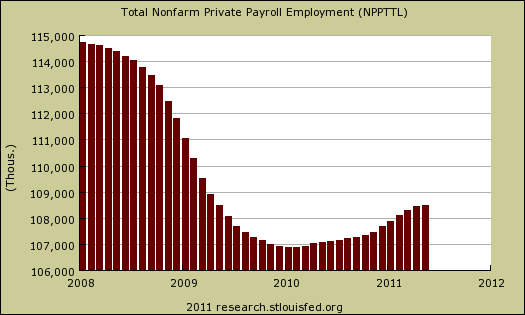 ADP is reporting the service sector created 130,000 jobs while the goods sector gained 27,000 jobs. The ADP tab on manufacturing is up 24,000 jobs for the month. 3,000 jobs were lost in financial services. This report, if it matches tomorrow's official unemployment report, is still weak job growth. Also,the recent initial unemployment claims reports spiked up past 400,000. Anything above 400,000 in initial claims does not indicate job creation.

Construction dropped 4,000 jobs and the ADP notes 2,124,000 construction jobs have been lost since the start of the Great Recession.

We take the ADP report with a grain of salt, especially on a monthly basis. Why? Because there is a mismatch against the BLS jobs report. To date, the number of private nonfarm payroll jobs ADP reports versus what the BLS reports and on a month-to-month and even cumulative basis do not match. This monthly error is often large, especially when looking at small job growth overall (< 400,000 jobs per month) on a month to month basis.

Below is the cumulative difference between what the ADP reports as the private nonfarm payroll jobs vs. the BLS (ADP minus BLS). This line shows the divergence, over time in number of nonfarm private payroll jobs reported between the two reports. This post will updated to include the June ADP & BLS numbers when released on Friday. All of this said, the reality is the The United States currently needs about 11 million jobs to get back to pre-recession levels, taking into account population growth and the labor participation rate back in December 2007. Anyone jumping all over themselves over < 200,000 jobs added in one month, at minimum, isn't taking population growth into account and is experiencing wishes and dreams instead of what's true.

There is one thing to note that is worth looking at, especially due to it's relativity within the same report (and methods). ADP reports on large vs. medium vs. small businesses and their job creation per business size. In June:

Notice how large businesses have been declining and the pattern starts just about the time offshore outsourcing and the China PNTR came into effect. Small businesses, on the other hand, have increased employment. May I suggest that small businesses are not international, they are not signing offshore outsourcing contracts and moving jobs to India and China. Multinationals, on the other hand, the below decade trend line clearly shows these so called U.S. corporations have abandoned the U.S. worker, on whole. Earlier, the BEA reported statistics validating the ADP job creation trends by business size.

Here is the May May 2011 ADP private sector jobs report overview. That month reasonably matched the BLS report.

I think it was CNN who said on crawler that this was a jobs "surge." Well maybe it is vs. last month's figure of 54,000 new jobs.

But it's only a surge in the same way that we are in an economic recovery.

How much longer can we stay stuck?

When it comes to economics, it's not just fictional crap on their show. Even if the report shows 180k jobs added that's probably not enough to keep up with population growth. Rest assured I'll put up a graph-o-rama on the report and calculate all of those numbers out tomorrow. At least two articles overviewing it and crunching the numbers.