ADP's private unemployment report for September is showing -39,000 private sector jobs were lost for the month.

ADP is stating the obvious, in no uncertain terms. There simply is no job growth.

The decline in private employment in September confirms a pause in the economic recovery already evident in other data. A deceleration of employment occurred in all the major sectors shown in The ADP Report and for all sizes of payroll. The September decline in employment followed seven monthly increases from February through August. However, over those seven months, the average monthly gain in employment was 34,000. There simply is no momentum in employment.

Here is a breakdown of their private sector employment numbers. ADP does not collect data on any government jobs. 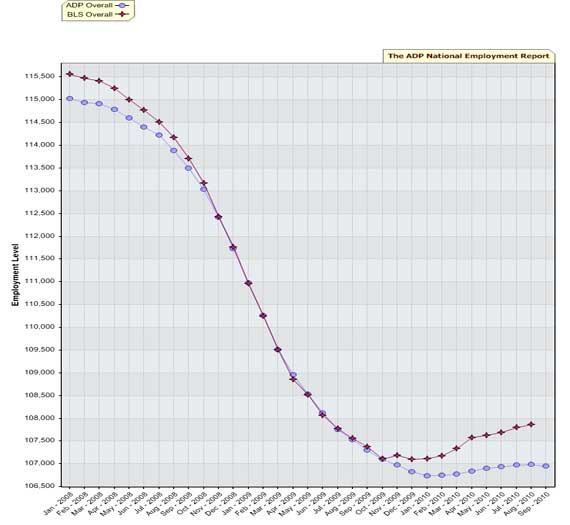 Additionally, ADP revised the previous month's report of August to show a net gain of +10,000 jobs.

These numbers are the result of global economic crisis. Every clever state like to save up some savings. But on the other hand, it forgets on a flexible market, which presents a development of economy. I´m a very suprising from financial sector, - 13,000 its a interesting finding. September is usually a critical month for an employment. I believe that next months will be much more better.

I hope to dig deeper into occupation/sector statistics. The BLS report is Friday but something is very smelly here frankly. I expect construction, real estate to lose jobs but manufacturing is another story to me, maybe a very old story, accelerating starting in 2000.

I notice you are commenting a lot, you can create an account and that way bypass all of the system checking to make sure you're a real human, plus additional features allow you to track your comments and replies to your comments.

We are just going to continue to bounce along the floor until the cracks in the are complete and we fall through. The mortgage foreclosure fiasco is probably going to be the one to do it.