Now that you've watched the interview, did Ben fib as so many are implying? First, anyone reading this site knows unemployment is a crisis bar none, so score one for Bernanke. But is it really true that a college degree saves the day on getting a job? Not so! While the unemployment rate is current 5.1% for those with a college degree, what's being ignored is that rate too high for the supposed ticket to the good life. Below is a graph of the unemployment rate for those who graduated from college. Currently, only 24% of new college graduates could find a job. 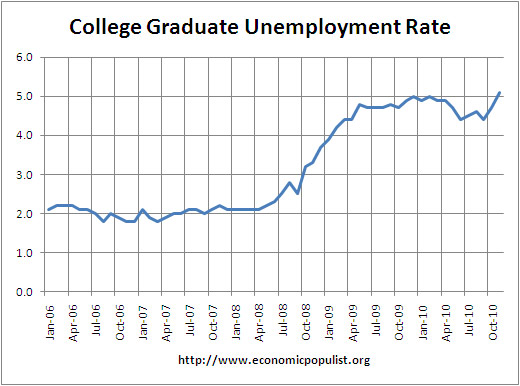 That said, another aspect of money is it's velocity, or how fast money is being exchanged. Notice how much it's decreased and stayed there. For another graph on QE2 purchases, read QE2 has arrived. Has QE2 helped the economy with super cheap money? Well, that super cheap money is fueling investment and expansion....overseas. QE2 makes the dollar weak, which could help with the trade deficit as well as the budget deficit, but bottom line, Congress and the Obama administration control policies which affect unemployment. How about inflation, the great quantitative easing worry? For some time both CPI and PPI are flat. Repeatedly we have had risk of spiraling deflation, so Bernanke is right.

That said....oil, an import, is increasing in price, which is bad. Crude is at a 26 month high and up 12% for the year. High oil prices can literally cripple an economy as we saw before the financial crisis eclipsed the oil commodities speculation boondoggle. Zero Hedge also has a list of other commodities that are higher this year, That said, much of this has to do with speculation in addition to exchange rates, supply, demand. So, I'll agree with Bernanke that domestically the United States is more at risk of deflation, but with an oil OMG caveat.

Other bloggers are picking up different aspects of the interview. Business Insider focused on Bernanke saying income inequality is destroying America. That's true! Score a big one for Bernanke.

Did Bernanke endorse the tax cuts for the rich, which Obama just caved on? In a way yes, but not for the propaganda put out there by the GOP. He did because another impetus reverberating in the overall economy that's so unstable, can tip the boat. Bernanke made it clear we are at risk of another capsize, so why increase the wave height? That said, it's unclear which tax cuts he was referring to and he was also talking about not tackling the deficit. Hangin' on every Fed word with a crystal ball, hopefully went the ways of Greenspan. We now know what really was behind that curtain.

Naked Capitalism mentions Bernanke's nervousness and implied it reflects on his concerns of the economy and past actions. I disagree, I think it's called going on television. What came through the digital bits was a sense of a desperate public plea to get Congress and this administration to act on policies the Fed just has no ability to control.

If you think Bernanke is alone on warning on the economy, he is not. Via Zero Hedge, we have a former OBM director also pointing out the new jobs are paying not enough to make rent on, never mind pay for your kids.

The blogs are full of Bernanke bashing and this site also has written volumes on past actions. But on this one, the interview was a good thing. The reason is Bernanke re-focused the national debate on the unemployment rate. This is a crisis and he made no bones about how leaving the U.S. middle class in the trash heap could literally destroy the national economy. He's gets huge leeway in my book for pointing that out.

Yeah, I know, write your disagreement in a comment please.