PBS finally just did their job and published a detailed article on the bogus tech worker shortage by leading labor economists, Hal Salzman, B. Lindsay Lowell and Daniel Kuehn.

Our analysis of the data finds that high-skill guest worker programs supply the preponderance of all new hires for the IT industry. The inflow of guest workers is equal to half of all IT hires each year and fully two-thirds of annual hires of workers younger than 30. 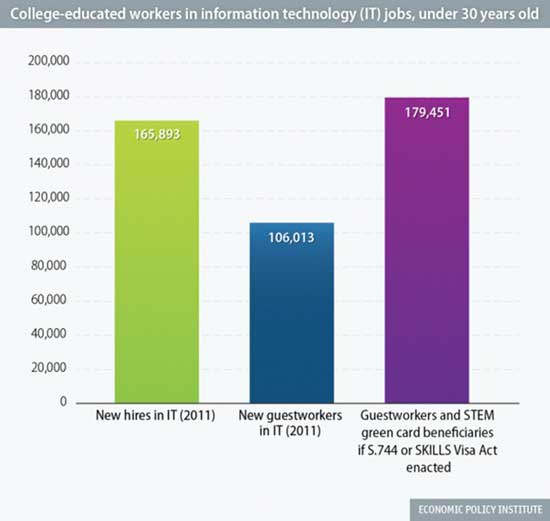 The number of guest workers and STEM green card beneficiaries in the Senate's legislation exceeds the number of new hires in the IT industry in 2011.

The above EPI graph spells out the situation clearly.  The jobs created are clearly not going to U.S. citizens in the tech sector.  We've shown the same result, also by original data analysis.  See this article for those statistics and corresponding graphs.

The problem with PBS is they are presenting this issue as a debate.  The statistics are overwhelming that there is no tech labor shortage.  Importing more foreign guest workers and flooding America's universities through more immigration avenues is clearly hurting American IT workers as well as future scientists.  That is the great spin by the media.  Trying to turn cold, hard facts with deep statistical analysis into opinion and debate.  There is no debate on these figures, they are facts as Hal Salzman, B. Lindsay Lowell and Daniel Kuehn point out.