The Manufacturing and Trade Sales and Inventories report shows a -1.1% decrease in sales and an +0.1% increase in inventories for June 2012. Sales declined -1.1% for manufacturers, -0.8% for retailers and -1.4% for wholesalers. This is the 3rd month in a row for declining sales and this is the largest monthly percentage decrease since March 2009. 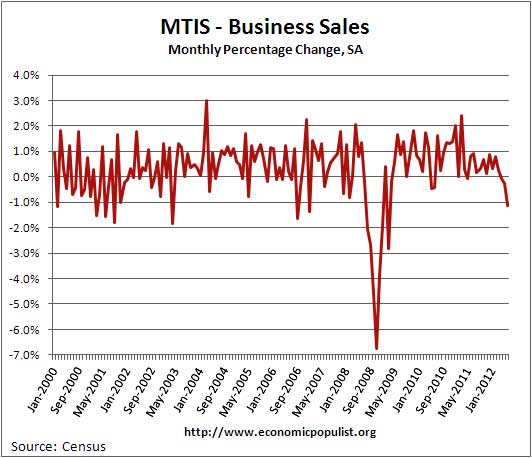 This is not a good sign for the economy. The change between Q2 and Q1 annualized sales is -0.78%, again not seen since Q2 2009. Business sales declined -0.26% for May and -0.07% for April. Below are manufacturing and trade sales by volume and again we see a similar slope emerging that is all too reminiscent of 2009. 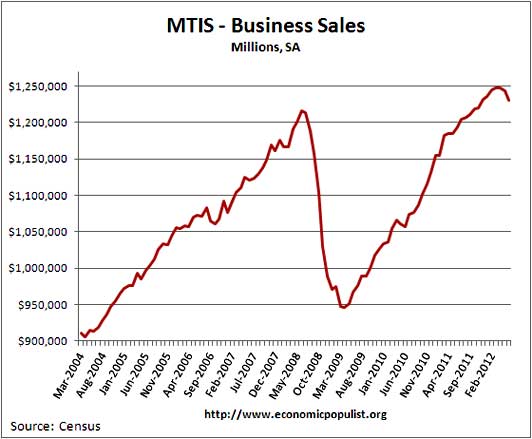 A really bad sign of this report is the inventory to sales ratio, now at 1.29. If inventories accumulate, and sales are declining, that's not good news for economic growth and even worse news potentially down the road as businesses try to shed their excess inventories by any means possible. Notice this ratio increases before and during recessions. In other words, with this June 2012 MTIS report, business statistics look like the beginning of the great Recession. The June 2012 breakdown of inventories to sales is even worse, manufacturers are 1.29, retailers are 1.38 and wholesalers are 1.20.

The MTIS was actually released on August 14th. We had technical difficulties that day but considering the warning signs contained within this statical release, we had to show you what we saw. Let's hope it's an anomaly and not the start of something bad.

END_OF_DOCUMENT_TOKEN_TO_BE_REPLACED

The QE2 Binge - Inflation on the Horizon - 60798 reads
Wisconsin Does the Nasty Against Labor - 125382 reads
Obama Signs Deal to Allow Mexican Truckers Onto U.S. Highways - 58573 reads
The Obama Administration is Training Offshore Foreign Workers to Take your Job - 67159 reads
Libya, Gas Prices, and the Big Payday at Your Expense - 48094 reads
The Approaching Muni Bond Implosion - 29811 reads
House discusses 401k/IRA confiscation - 255499 reads
Bankruptcy Hell - The Sequel to ForeclosureGate - 30033 reads
The Economic Populist Site Rank, Statistics and All of That Jazz - 144890 reads
Major Site Administration News - 74529 reads
Will the NY Attorney General Bring Doomsday Charges Against Wall Street? If So, How Long Will He Survive? - 1182917 reads
New York Post Claims Census Falsifies Unemployment Figures - 897536 reads
Safeway Skewered for Throwing 6,000 Workers Under the Bus in Video Parody - 396618 reads
How Many Jobs Are Needed to Keep Up with Population Growth? - 284567 reads
VAT or Value Added Tax is Getting a Look in D.C. - 279102 reads
U3 and U6 Unemployment during the Great Depression - 272194 reads
Tax Cuts for the Rich Do Not Generate Jobs - 257985 reads
House discusses 401k/IRA confiscation - 255240 reads
Delusions of Normalcy 2011 - Dismal Scientists Cheer Up - 245308 reads
The war on the middle class - 243710 reads