Home prices continue on their downward spiral with no relief in sight -- David M. Blitzer, S&P

The National Index hit a new recession low with the first quarter’s data and posted an annual decline of 5.1% versus the first quarter of 2010. Nationally, home prices are back to their mid-2002 levels. 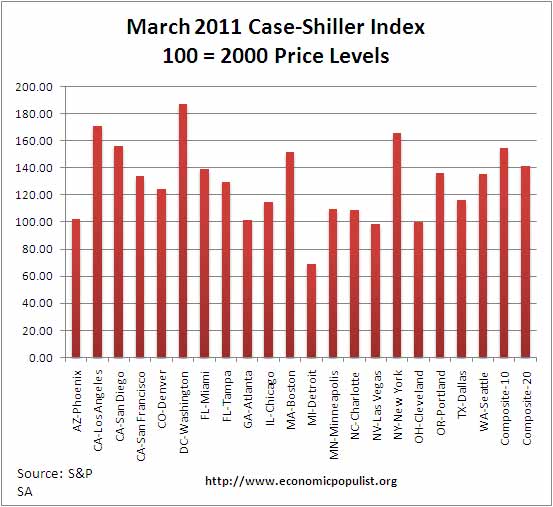 Minneapolis posted a double-digit 10.0% annual decline, the first market to be back in this territory since March 2010 when Las Vegas was down 12.0% on an annual basis.

It seems the only place going up is our never ending corrupt Washington D.C. area. The report blames the tax credit, but there is only so long they can blame the home buyer's tax credit instead of the great jobs crisis and middle class squeeze. Some areas are still not affordable and out of alignment with wages and salaries, such as LA, Seattle and Portland.

Below is the yearly percent change in the composite-10 and composite-20 Case-Shiller Indices. As you can see, there is clearly a new decline going on for 2011. This is what is meant by double-dip in declining home prices.

Below is a table are all of the cities of the composite-20 index. This should give a feel for the bubble and now current devaluations. Notice the stronger correlations in price declines to the unemployment rate and lack of job growth, such as Detroit. 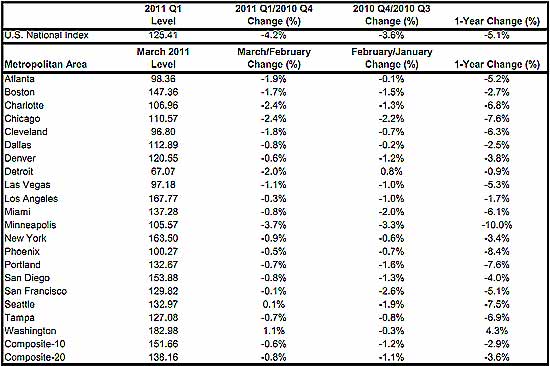