The Census, part of the Commerce Department, today released the monthly construction spending report. This is a monthly tally, reported seasonally adjusted, annualized, of how much money was spent on construction. Spending was $808.9 billion in February. The survey has been done since 1960. The below graph shows just how badly construction spending imploded since 2008. Dollars are not adjusted for inflation, so the overall decline is even more dramatic. 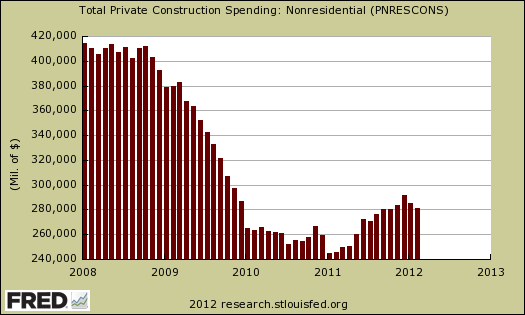 Public construction spending overall is down -1.7% from January. Below is the report breakdown.

As you know, we here at The Economic Populist love graphs, especially the Saint Louis Federal Reserve FRED tools. FRED has a host of construction spending graphs by individual sectors. Covered is spending on highways, sewers, commercial, manufacturing, water supply and so on. 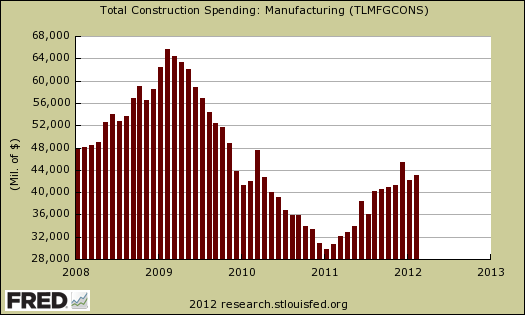 Power construction, despite declining this month is another bright spot, up 22.1% from February 2011.

As an economic report, this data is considered minor by analysts and economists, yet when one really looks at the series over time, it shows how investment, construction, especially residential real estate, imply future growth.